A badge of honour – Workshop update

It is such a delight to work on these very special classic cars. Jaguar have such a rich history as the XK140 boot badge pictured here testifies to. As such it is always and honour to be entrusted with someone’s cherished classic car. Be it for a full restoration, a service and MOT or to have one of our upgrades fitted; all the cars which pass through our workshops are treated with the greatest respect and care. We understand that whether the car is an early aluminium XK120 or an S-Type Saloon it is your pride and joy and that if you have brought it to us, you want the very best standards of work. If you are considering choosing Twyford Moors rest assured your car is in safe hands.
In this weeks’ update we look at some of the quirky things you find when stripping a restoration project, an XK120 wiper upgrade and much more. 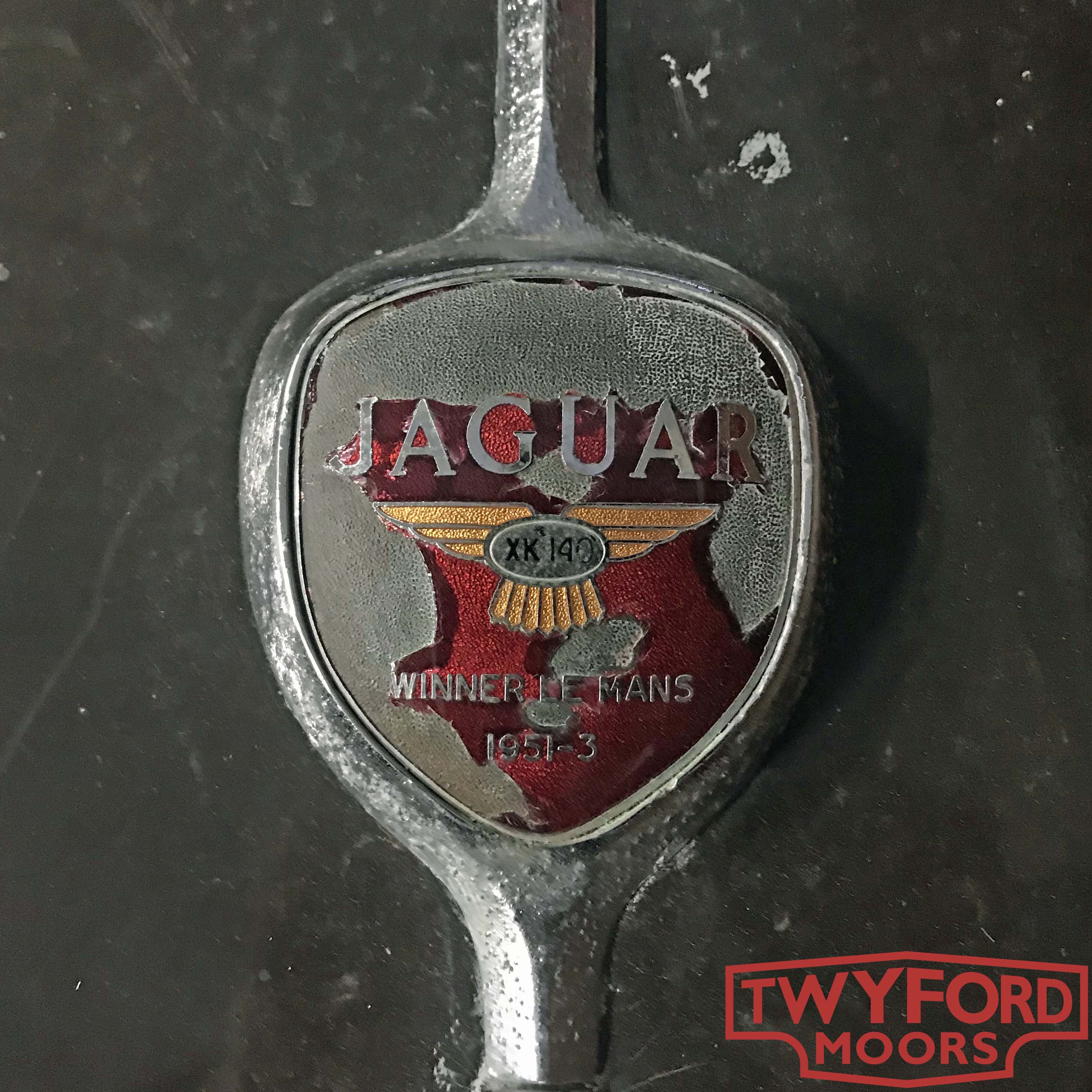 We would like to offer our congratulations to the Jaguar E-Type Club on their E-Type 60 event being shortlisted for the RAC Historic Awards. This wonderful event is a finalist in the “Motoring Spectacle” category of the Royal Automobile Historic Awards with the winner set to be announced on the 25th of November.
It was such an achievement that the E-Type Club put on such a successful event during such difficult time. Their commitment and passion to ensure the event went ahead was apparent throughout, especially as early on in 2021 there was no guarantee that such an event would even be allowed to go ahead. Despite the pandemic the event was a great success, had a wonderful festival feel to it and in our view was the kicking off point for what has been a great year of classic car events. This shortlisting is a well-deserved recognition what an impressive event they put on and we wish them luck for the 25th of November. 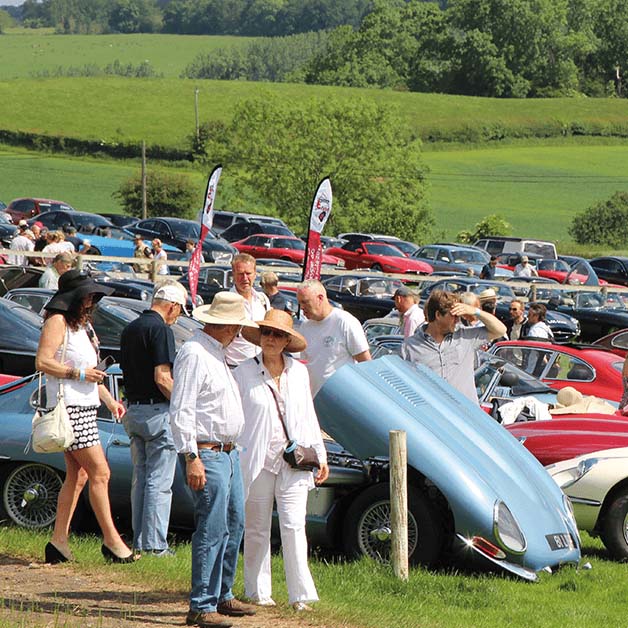 This very striking V12 E-Type has just arrived with us for sale. It is a beautifully original right-hand drive UK car. First manufactured in 1974 this car has covered just over 60,000 miles and remains in wonderful condition. The extensive history file includes MOT certificates dating back to 1977 when the mileage was just 11,667 miles. This documentation combined with the condition of the car verify both its originality and the high levels of care this E-Type must have received over the years.
In recent years this E-Type has had some more significant works carried out. The brakes were extensively checked over and overhauled here at Twyford Moors just about ten years ago at which time brake hoses were fitted. The car has also had the engine removed, inspected and overhauled. At this time the gearbox was rebuilt by well-respected specialists G Whitehouse Autos. 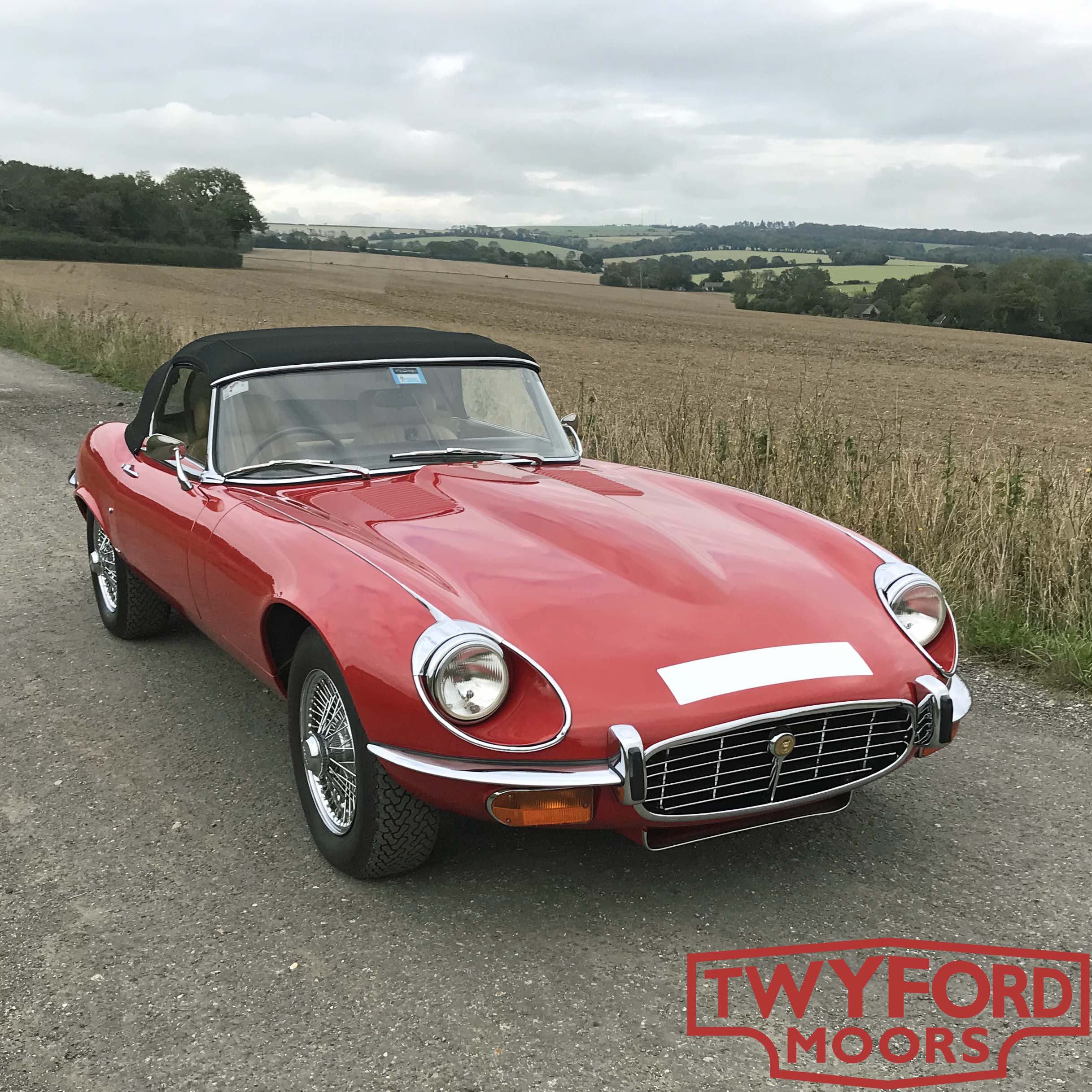 The Jaguar XK120 fixedhead coupe has to be one of the most beautiful cars ever produced and certainly stands out amongst the XK range. This lovely example has been very nicely restored by its owner but there were a few outstanding issues that were making the car less usable than he would like. Amongst these issues were that the wiper sweep was very poor, the fuel gauge was woefully inaccurate and they could not get the spare wheel to fit.
The owner opted to have our upgraded wiper system fitted which gives the XK120 the benefit of two speeds and park. This system uses a modern and more powerful motor along with a new linkage and wheel boxes allowing more tension to be put on the wiper blades. All this combines to give a far more effective wiper system than the original. 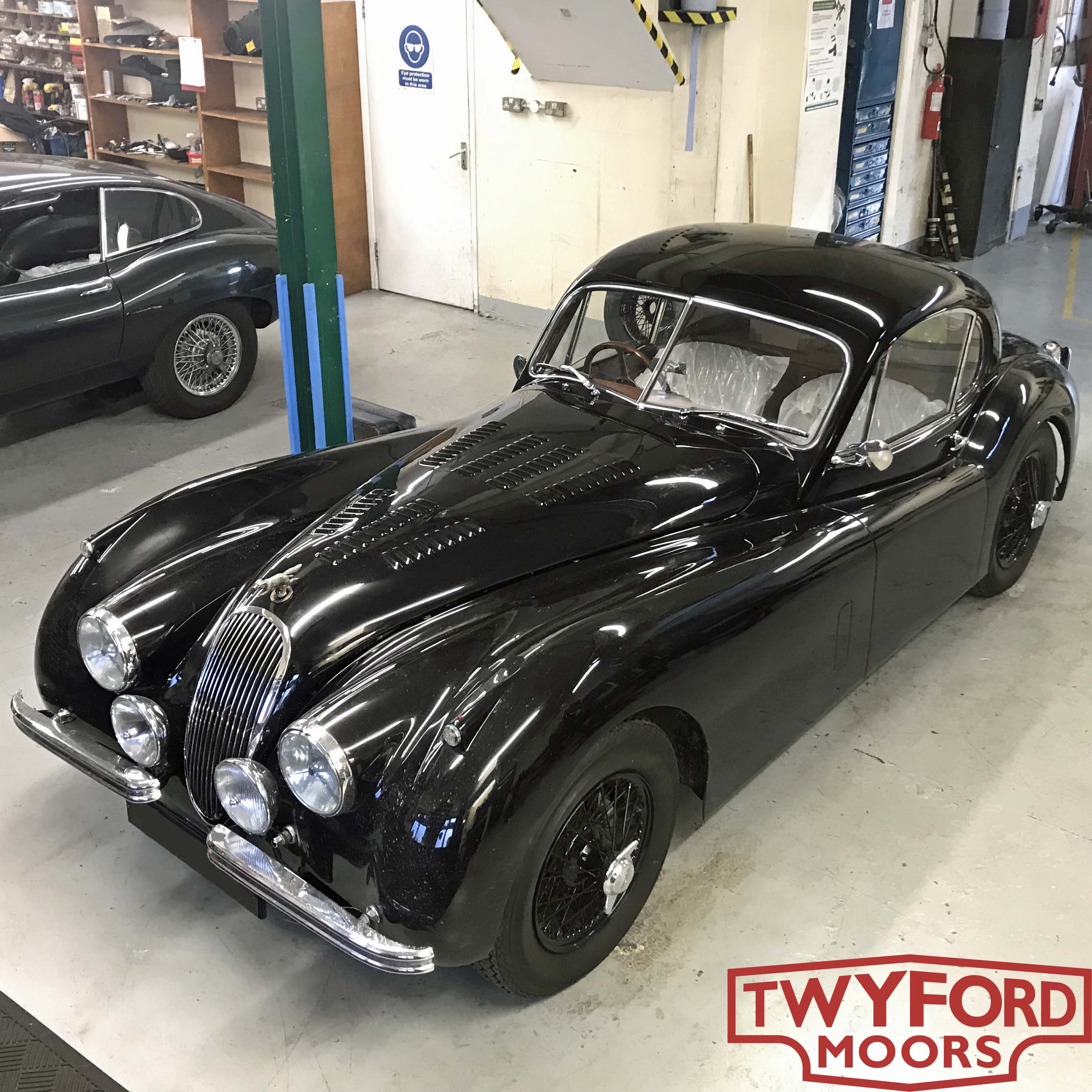 We said we would share updates on the XK140 drophead we are currently stripping down to restore so here is a little delve into the details you find when stripping down such old cars. We love stuff like this as it paints a picture of the car’s history. Despite being largely complete this car has clearly lived quite a life and has had many repairs over the years. It has also picked up a home made straight through exhaust system which we imagine must have made a very impressive noise. At some point this steel exhaust system has developed a hole which has been repaired using the time-honoured technique of cutting out a bit of a tin can and clamping it in place with a jubilee clip. We don’t recognise the tinned ‘delight’ chosen for this particular repair but we assume this repair was done in the US as that is where the car was imported from. Perhaps one of our North American followers can enlighten us as to what this tin can was? 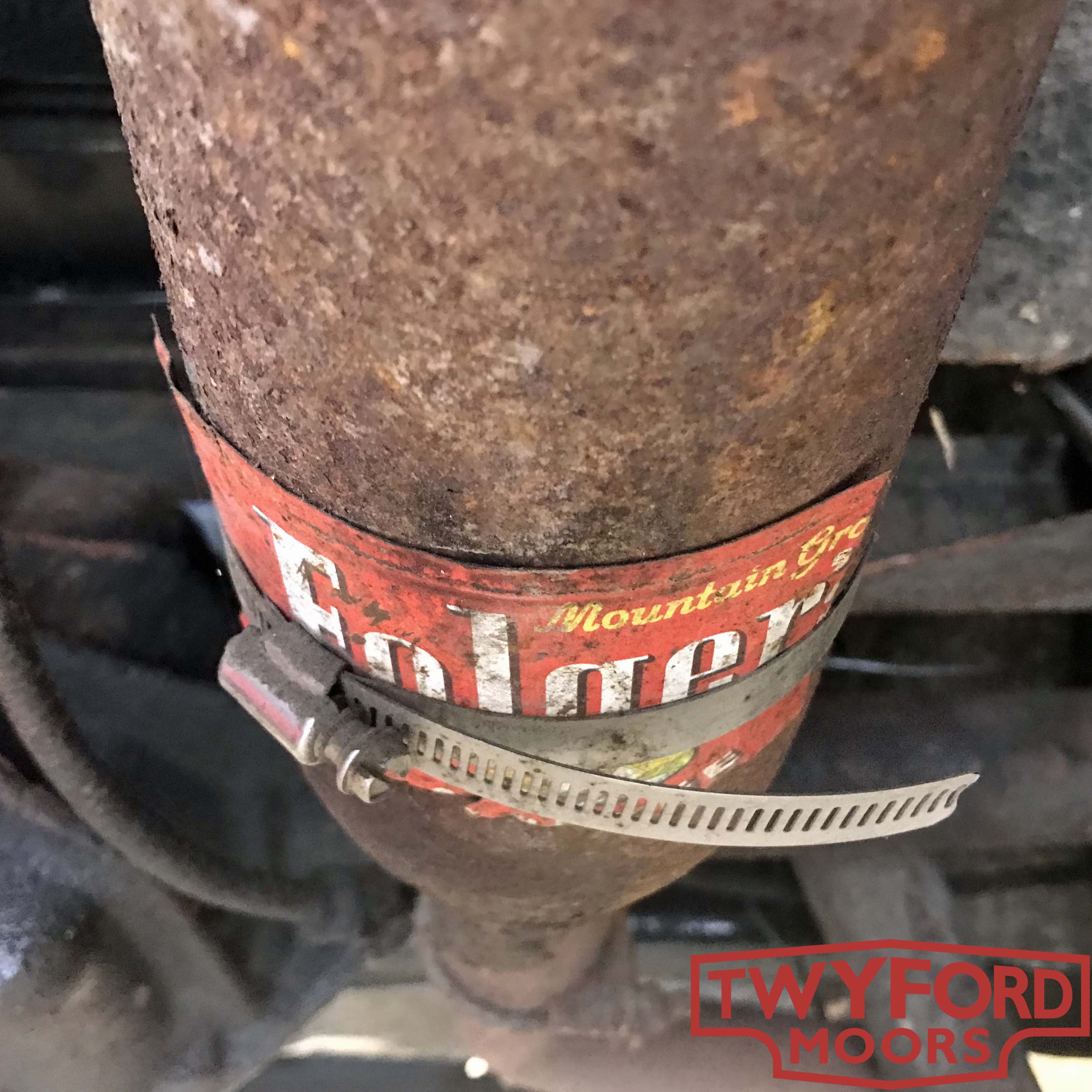 Although we are best known for our XKs, and Jaguar sports cars are our bread and butter, on any given week you will usually find a saloon or two in the workshop. This Jaguar MK2 saloon is a particularly nice example and came in for a service along with a few other minor jobs including a perished rear brake hose and a rotten brake fluid reservoir.
We are seeing more and more of these saloons and find fairly consistently that they have suffered with a lack of maintenance leaving some of the vital serviceable items in poor condition. We don’t know if this is due to historic lower values or due to a lack of knowledge of how best to do these jobs. What we do know is that there are some jobs such as steering box overhauls and replacing subframe bushes that are regularly ignored and significantly impact both the safety and handling of these fantastic cars. 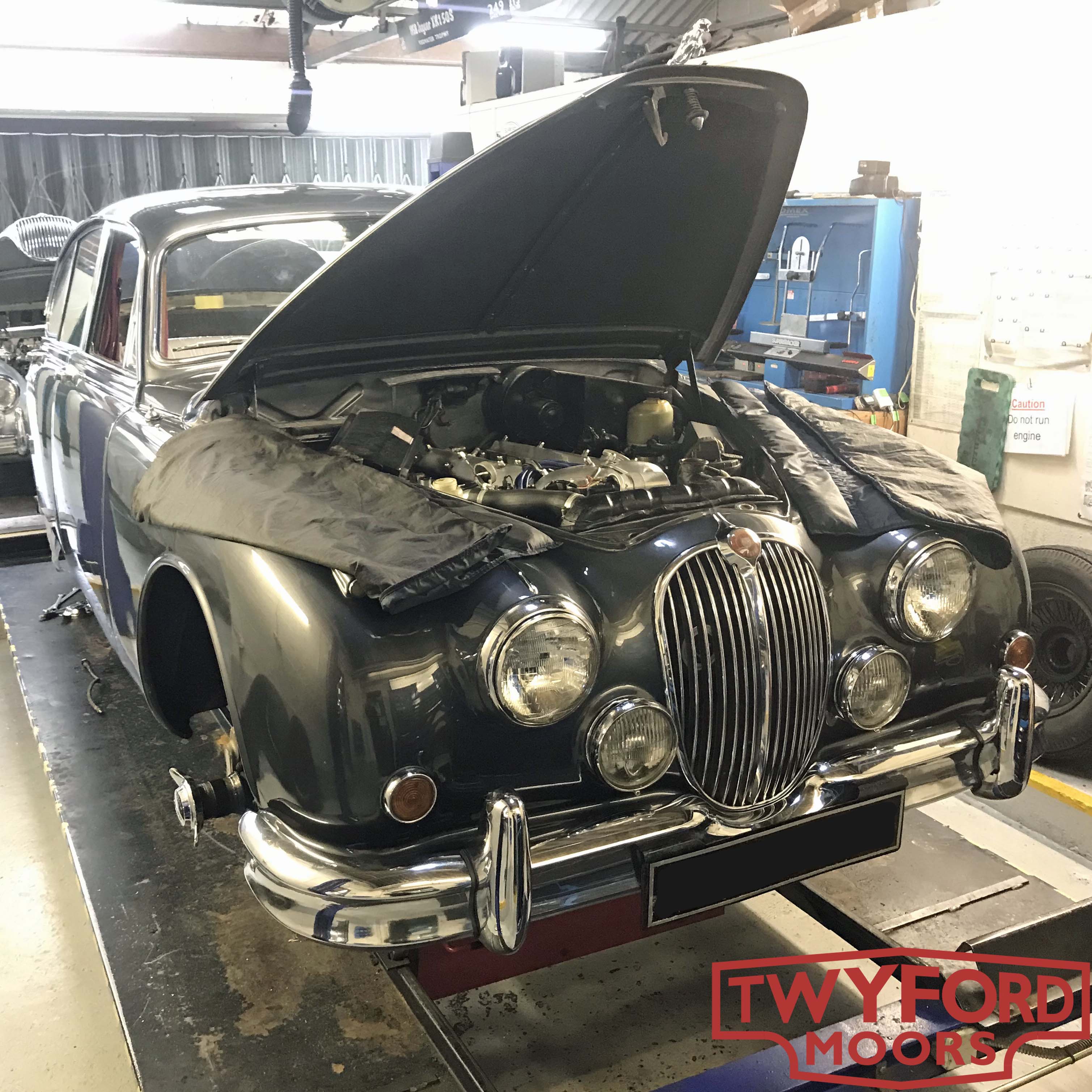 When we first laid eyes on this XK140 fixedhead coupe, some years back, it had just been bought through auction in supposedly good driving condition. It had a valid MOT and was marketed as a good usable car. Once the car was checked over it was found to be far from condition described, certainly should not have passed an MOT and was totally unsafe to be driven on the road. Beside the safety issues the oil pressure was non-existent and an independent rear suspension set up from an E-Type had been fitted very poorly to the rear.
Thus began an extensive mechanical overhaul of the car to get it back to safe and driveable condition. The independent rear suspension was removed, the chassis repaired and an original live rear axle was fitted. The engine was rebuilt to fast road specification and all the suspension was rebuilt with polyurethane suspension bushes. The brakes were fully rebuilt and uprated front disc brakes were fitted. The car was also fully rewired and upgraded with an alternator, electric cooling fan, electric power steering, electric ignition and much more. Today the car is back in with us for a check over and a service. We are pleased to say it has gone from being a death trap to one of the best driving XKs to grace the public roads. 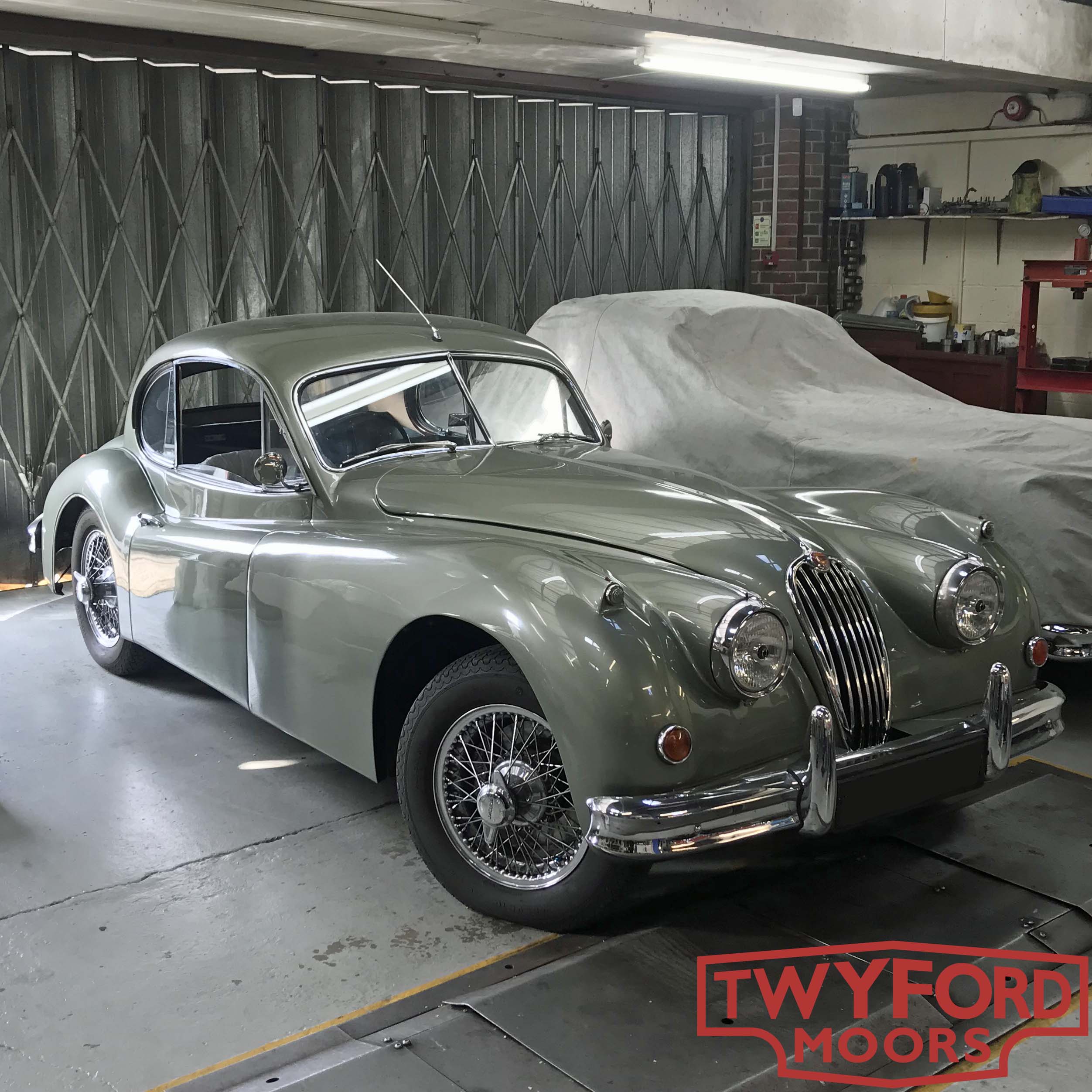