About the Jaguar XK

The XK120, XK140 and XK150 were the Jaguar production sports cars of the 1950's - the classic era of Jaguar Le Mans successes. During this period around 30,000 XKs were made in three models:

Each model was available in three bodystyles:

About 75% of total production was Left Hand Drive  - most of which were sold in North America. 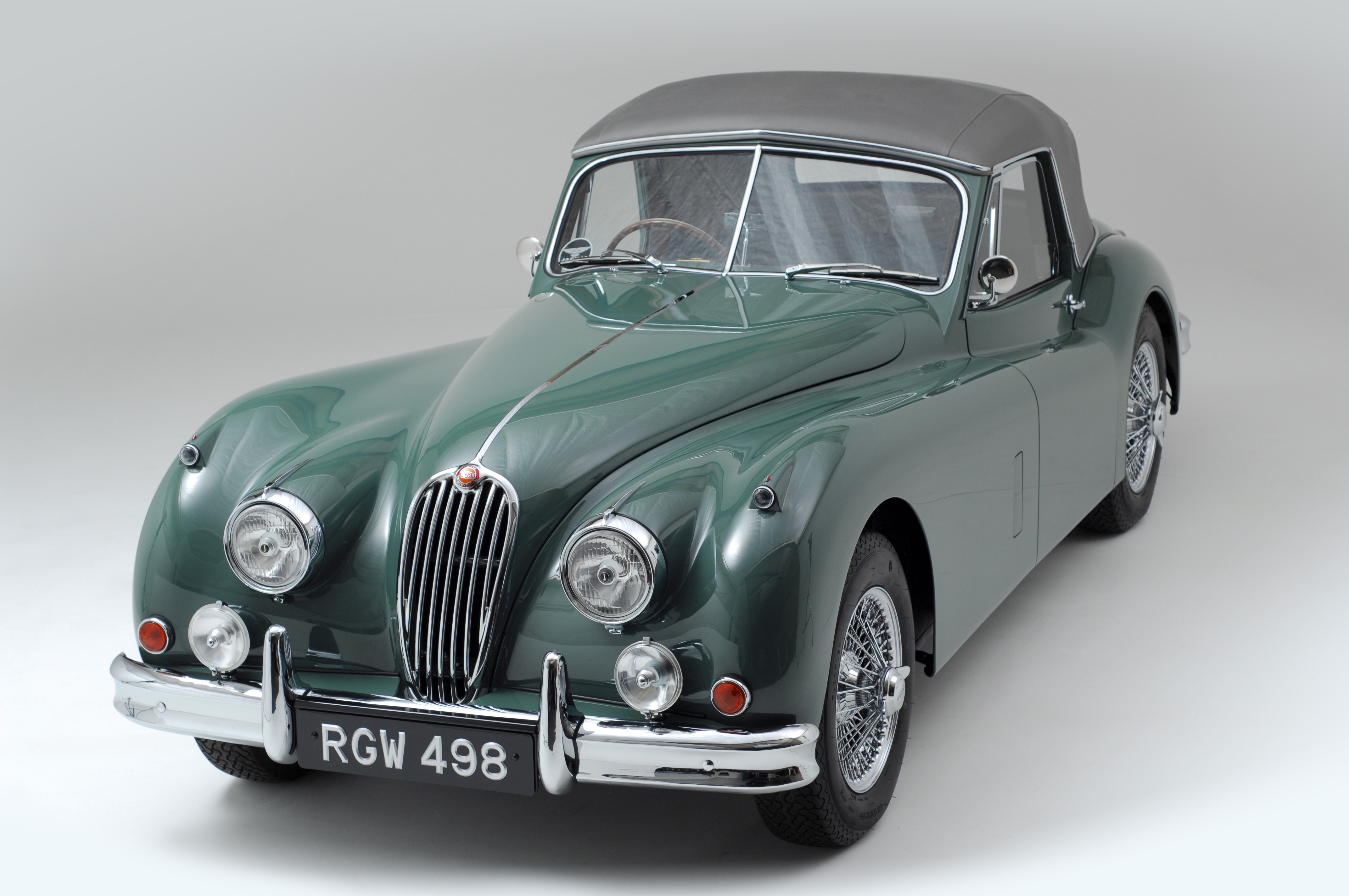 Launched in 1948 at the Earls Court motor show the Jaguar XK120 was a revelation to post war England. It's sweeping lines and revolutionary twin-cam engine made the XK120 an instant hit; it was however only ever intended to be a limited production sports car for publicity purposes.

Sir William Lyons six cylinder twin-cam engine was originally destined to be launched in Jaguars new range of saloons. This new range wasn't ready on time so a plan was hatched to build a limited production sports car. Lyons designed the body in a few weeks, a MK V saloon chassis was cut down and a 3.2 engine was fitted to create the XK120 prototype. The result was so popular that Jaguar couldn't keep up with demand for "the fastest production car in the world" and the plan to produce 200 was thrown out of the window. The original design used an aluminium body over an ash and steel frame, which was in fact heavier than the later steel cars, but a redesign was necessary to keep up with the unanticipated levels of demand.

In May 1950 the first steel bodied XK120 rolled out of the factory and finally, after only building 96 cars in the first two years of production, Jaguar could keep up with demand for its now legendary sports car.

1951 saw the introduction of the XK120 FHC (Fixed Head Coupe). This made the XK120 a truly practical car with winding windows and a walnut veneered dashboard. The XK120 FHC was officially export only and there are therefore very few RHD (Right Hand Drive) XK120 FHCs. The reasons for the majority of XKs being exported were two fold; first there was high overseas demand, particularly from the USA, for the XK120 and secondly in  post-war England scarce resources were allocated to those companies that exported much of their production. The exportation of the XK meant that Jaguar not only lead the way in motor sport through the 1950s but also lead the way towards economic recovery for the UK.

Also in 1951 the 'SE' spec was introduced. Jaguar took what they had learned from their success with the XK120 and 'C'-Type in racing and rallying and applied it to road going XKs. Power was increased form 160bhp to 190bhp and wire wheels added to provide better cooling for the drum breaks. The optional 'C'-Type head upped the power output even further to and estimated 210bhp. In the cold light of day over sixty years later Jaguar might have been exaggerating a little with these figures but that does not detract from the success they had with these cars.

The XK120s final incarnation came in 1953 with the addition of the DHC (Drop Head Coupe) to the range. This offered the practicality and luxury of the FHC with winding windows, walnut dash and a roof that would actually keep the rain off combined with the joy of open top driving offered by the OTS

In 1954 the XK120 was replaced by the XK140 but in it's 6-year production run the XK had already changed the automotive world. 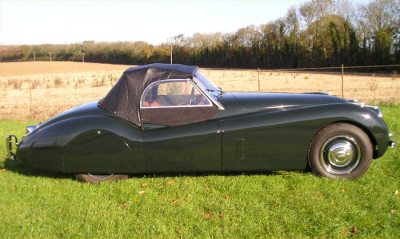 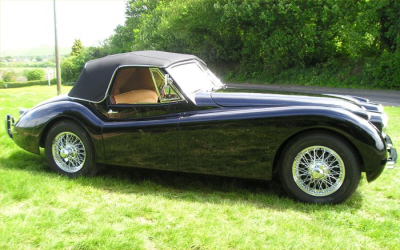 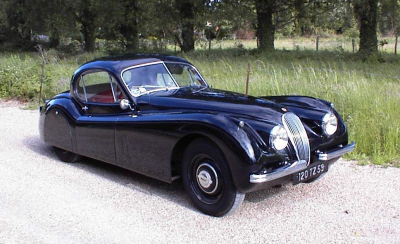 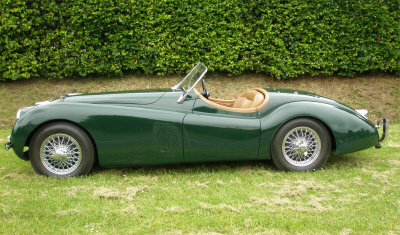 The XK140 replaced the XK120 in September 1954. After the immense popularity and success of its predecessor the XK140 had a lot to live up to. Although the XK140 never recreated the motor sport success of the XK120 because Jaguar were now running the C-type and developing the D-type, the 140 was a commercial success. Don't be fooled by the XK140's less sporty image though; the 140 took everything that was great about the 120 and built on it.

Although the XK140 retained the same clean, flowing lines of the XK120 there were many improvements to the car hidden underneath. The engine was more powerful from standard, steering was improved by a new rack and pinion system, tighter handling and a smoother rider were achieved by the old leaver arm dampers being replaced by telescopic shock absorbers and the engine was moved forward. Another advantage of the engine moving forward was that more room was created in the cockpit allowing the taller driver far more legroom than in a 120. The roofline of the XK140 was also lengthened to allow room for two tiny rear seats and the screen was moved forward. Full bumpers were fitted and lashings of chrome gave the 140 a more executive look without overwhelming the simple lines of the car.

The XK140 was again available in three body styles; the Open Two Seater (OTS), the Drop Head Coupe (DHC) and the Fixed Head Coupe (FHC). In addition to this there was a more comprehensive options list. The Special Equipment (SE) option remained with the added option of the 'C-type' head pushing the cars power output up to a claimed 210bhp. The 140 was also offered with an Overdrive and an Automatic gearbox giving the potential customer a full range of options to suit their needs.

Exports still ruled the day in 1954 therefore, much like the XK120, most XK140s were built in left hand drive and exported. 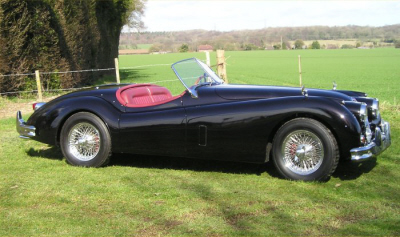 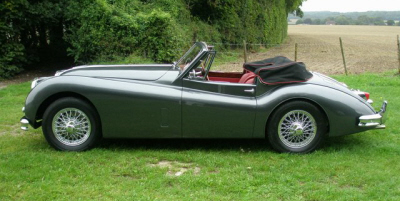 Launched in 1957 the XK150 was the most radical step forward in the XK range since the launch of the revolutionary XK120. The XK150 was vastly different in both style and performance from the XK140 it replaced and was a much bigger step forward than had been taken from the XK120 to the XK140. The most striking change was the straighter wing line, widened bonnet and single wrap around windscreen, which replaced the now dated two-piece split screen. This gave the XK150 an altogether more modern look. More generous interior space was also achieved by putting the doors on a diet and the wooden interior was lost in favour of leather clad dashboard and door capping.

Although the most obvious changes were the styling the XK150 was also a radical step forward in terms of performance. Most notably disc brakes on all four corners of the car, which had been developed on the C-type with Dunlop, made the XK150 the first of the XK range able to stop as well as it could go. All round disc brakes on a road car were revolutionary for the time and set the XK150 apart from its competitors. A new cylinder head, the B-type, was added to the 3.4-liter engine producing a claimed 210bhp.

Initially the XK150 was offered in Drop Head Coupe (DHC) and Fixed Head Coupe (FHC) form however in late 1958 a "Roadster" or Open Two Seater (OTS) variant was introduced. This coincided with the "S" version of the car, initially available only on the OTS but available on the Coupe models form early 1959.

The "S" specification XK150 came with what Jaguar called a "straight port cylinder head"; although the ports aren't actually straight they are straighter and wider than the standard head allowing for better air flow. To keep pace with this increased potential for air/fuel flow triple 2in SU carburetors were added. According to Jaguar this upped the power to 250bhp.

By this point the power race was truly on, especially in America, so to compete with large capacity American V8s, Jaguar introduced a new 3.8-liter version of their straight six. In standard form the new 3.8 was claimed to produce 220bhp and in "S" specification the power was reported to be 265bhp.

By then end of its production run there were a huge array of different XK150 models. It was available in DHC, FHC and OTS body styles, in standard specification, SE specification or S specification and with either a 3.4 or 3.8 engine. Although early standard cars were fitted with steel wheels, these are very uncommon now. There are also reports that some early, "standard" specification cars had drum brakes we are yet to see, or hear of an XK150 running on drums or having ever run on drums.

In 1961 the XK150 was replaced by the E-type or XKE, a car that was as revolutionary and striking as the original XK120 was in its time. Over its 13 year production run the XK had revolutionised the sports car industry, put Jaguar on the map as a global player in the car market and helped lead the way in helping British industry recover after the war. 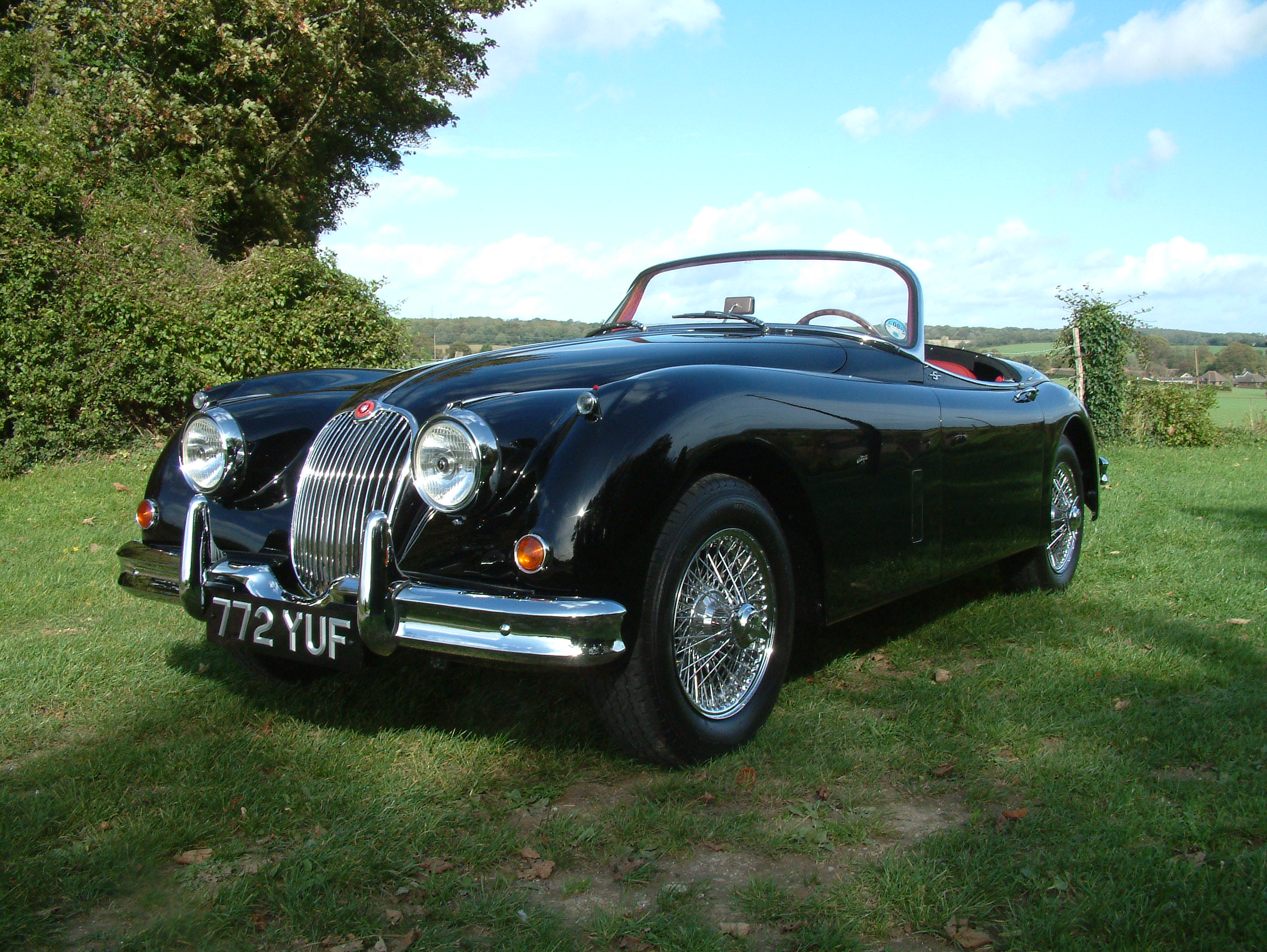 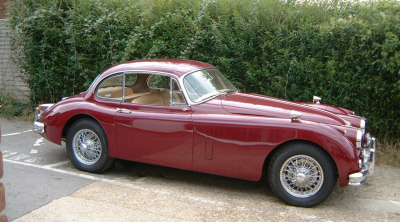 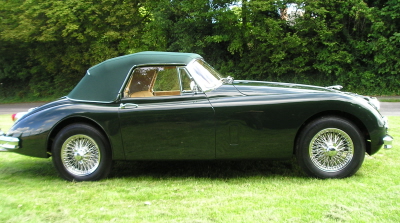