Back in the workshop and back to work - Workshop update

It has been a few weeks since the last one of these workshop updates. This has not been due to a lack of activity; in fact, it is because we have been so busy. Although we like to keep you all updated on what we have been up to, the business of maintaining and restoring classic cars must come first. Over the past few weeks, we have had the wonderful success that was the E-Type 60 festival. If you want to read our director Nik's reflections on the event, please see the article in our news sections. Classic car shows aside we have been busily working our way through what can only be described as the highest level of demand we have ever experienced in the workshop. We would like to thank our customers for their patience as we will not compromise the quality of our work and therefore are limited as to how quickly we can turn cars around during this busy period.
In this weeks' update we have a look at a MK2 in for servicing work, a fresh XK140 restoration, a full rewire and an incredibly special E-Type which has just come in for sale. 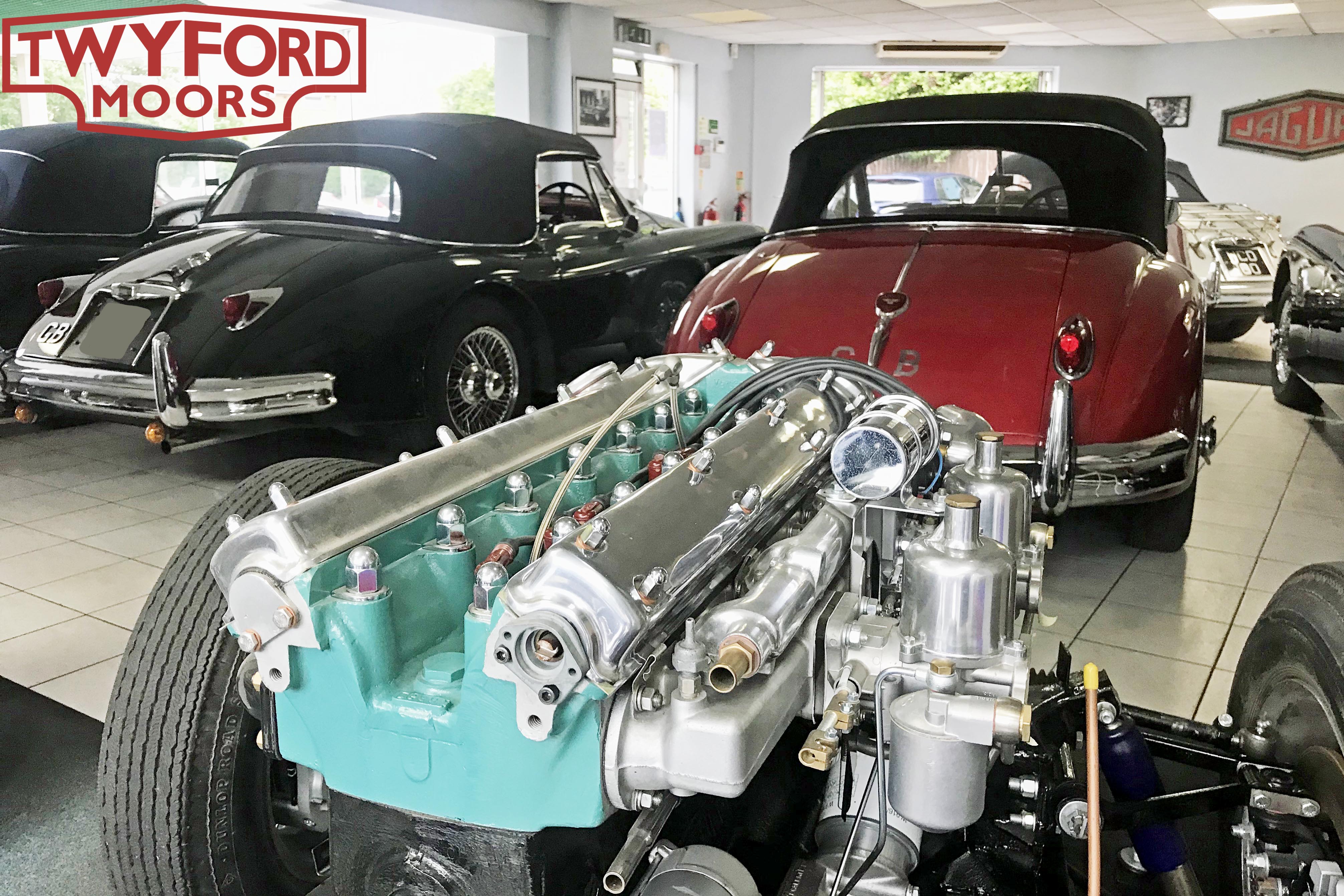 This early 'flat floor', 'outside bonnet lock' E-Type OTS was the 52nd car built. One of only 91 such cars produced it is an original, UK right-hand drive car delivered to Henleys of London. It features in the famous photo of the first 60 E-Types lined up outside Browns Lane ready for delivery in July 1961.
This fully matching numbers car has been maintained impeccably by mark specialists since its restoration in 1994. The restoration was a full nut and bolt restoration, and the car has only done approximately 14,000 miles since then.
Please visit the for-sale section of our website or call us for more information on this car. Viewings and test drives are available by appointment. This is an exceptional car in immaculate condition and an opportunity which does not come along frequently. 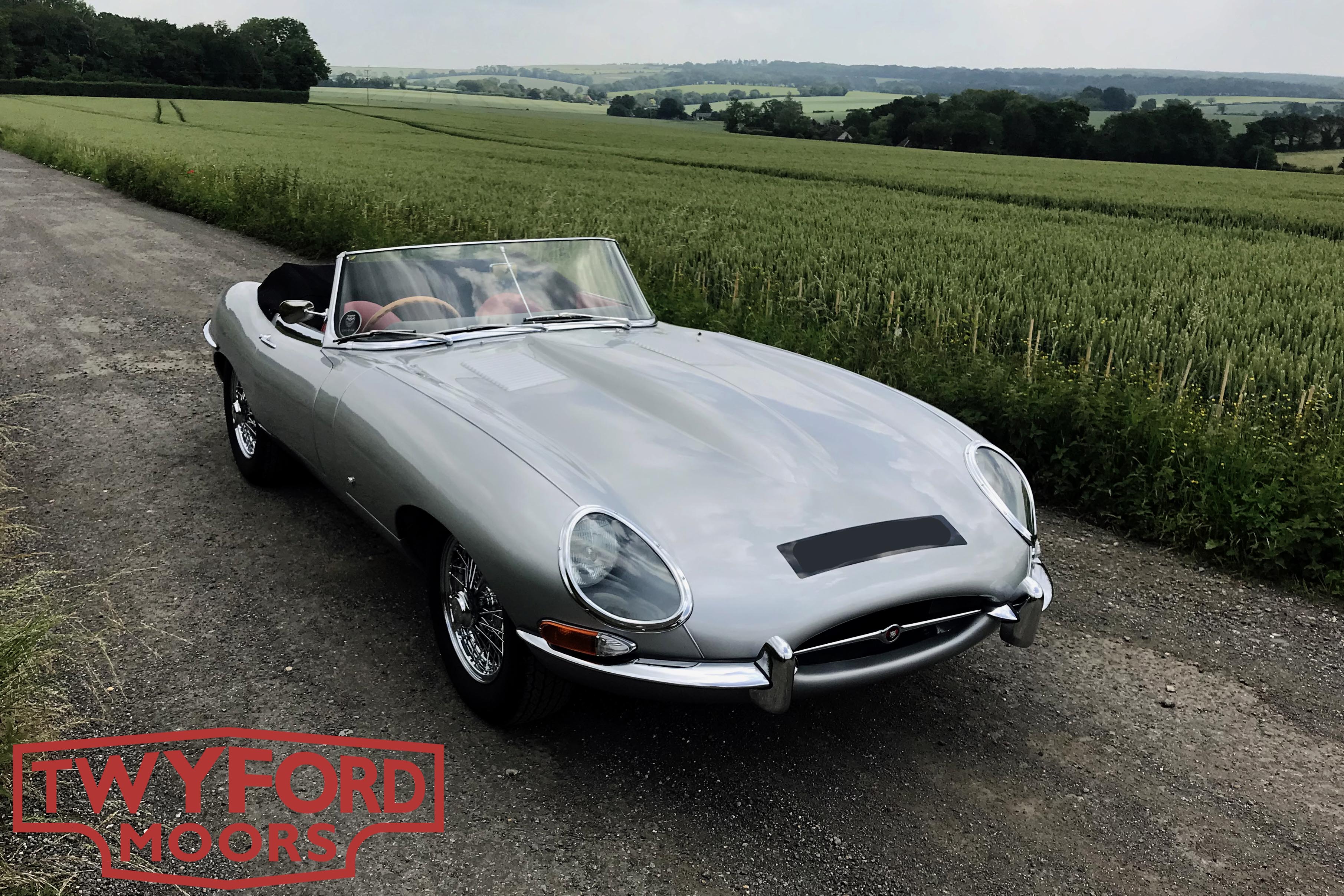 Although we are best known for our XKs and E-Types we see plenty of Jaguar Saloons come through the workshop doors. In terms of how they are engineered, from the XK engine to the electrics, they share so much in common with XKs and E-Types we are easily able to turn our hands to them. This MK2 joined us for a thorough service, check over and a new clutch.
A clutch change on these saloons is a tricky job. The engine bay is much more restricted than on XKs and the engine and gearbox have to be removed to change the clutch. Great care must be taken when removing the engine out so as not to damage anything. The old clutch has now been replaced with a new diaphragm clutch (balanced to the flywheel) and a roller release bearing. This will give a lighter and smoother clutch pedal making the car significantly easier and more enjoyable to drive. 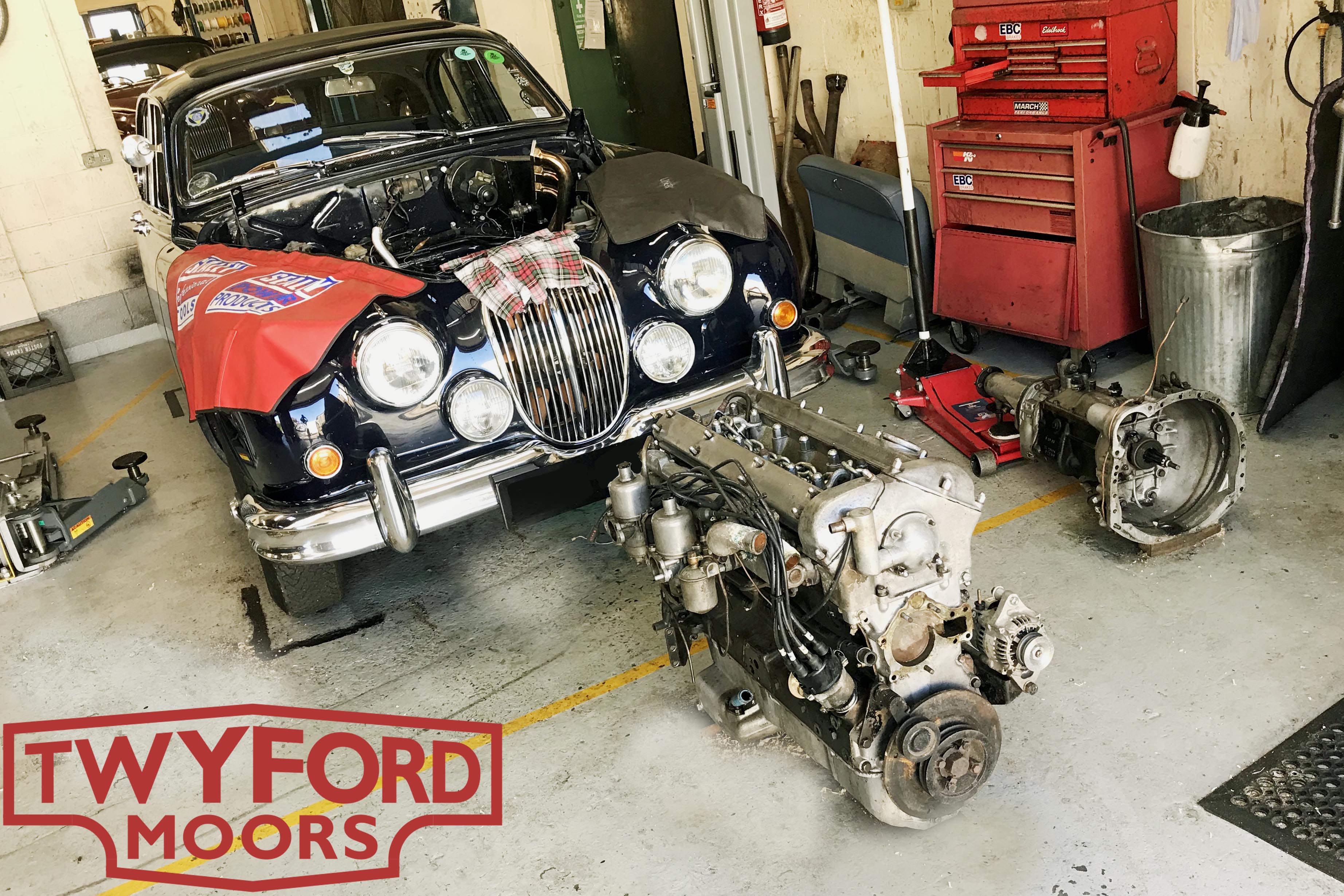 The showroom remains busy with high demand for visits and test drives. If you would like to come down to view our stock, discuss having work done on your classic Jaguar or simply visit to see what we do please get in touch to book an appointment.
Sales remain swift and the latest car to head off for a new owner is this lovely XK140 fixedhead. This XK is an original UK, matching numbers, right-hand drive car. We have looked after this car for nearly 15 years and carried out an extensive programme of work on it back in 2007 when the car was upgraded for modern use. The car benefits from polyurethane suspension bushes, disc brakes, overdrive gearbox, electric cooling fan and an alternator. This is a fantastic example of a useable 'everyday' classic which we hope the new owner will get many years of pleasure from. 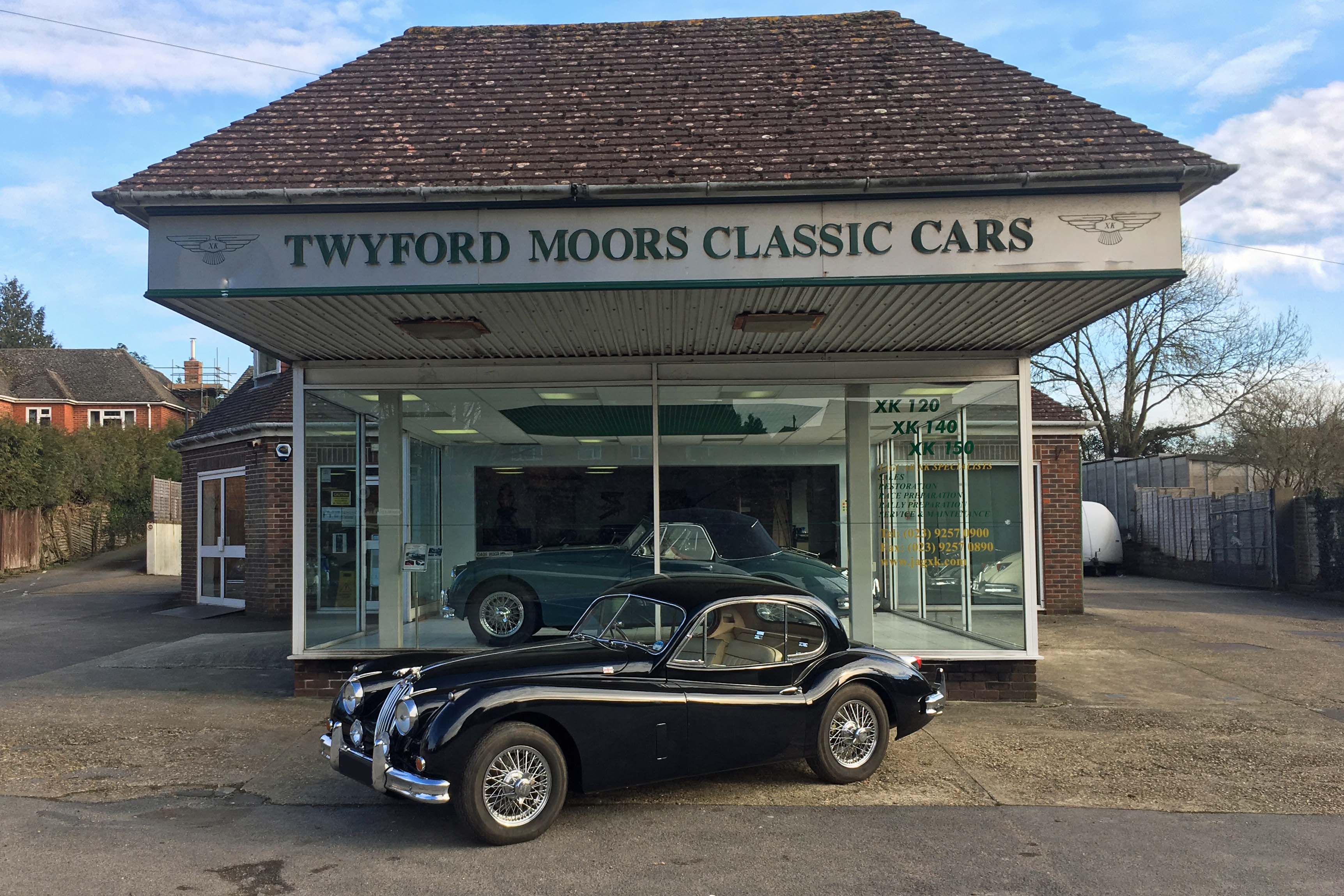 At any one time we have over half a dozen full restorations on the go at various stages. These full restorations are carried out to order for customers and to their exact specifications. We can build cars anywhere from completely standards to extensively upgraded for modern use. The vast majority of our customers opt to have their cars upgraded and we pay particular attention to designing our upgrades to be well hidden and unobtrusive. We believe that a classic car should look as it would have in period but offer build quality, performance and reliability far beyond that expected in the 1950's.
The chassis pictured here is the latest restoration which we are just starting to build up. This is an original UK, right-hand drive Jaguar XK140 drophead coupe. The chassis has been stripped back to bare metal, repaired as necessary, protected and then painted. We favour painting chassis to powder coating as we have learned from experience that over time powder coating can crack and start to come away. 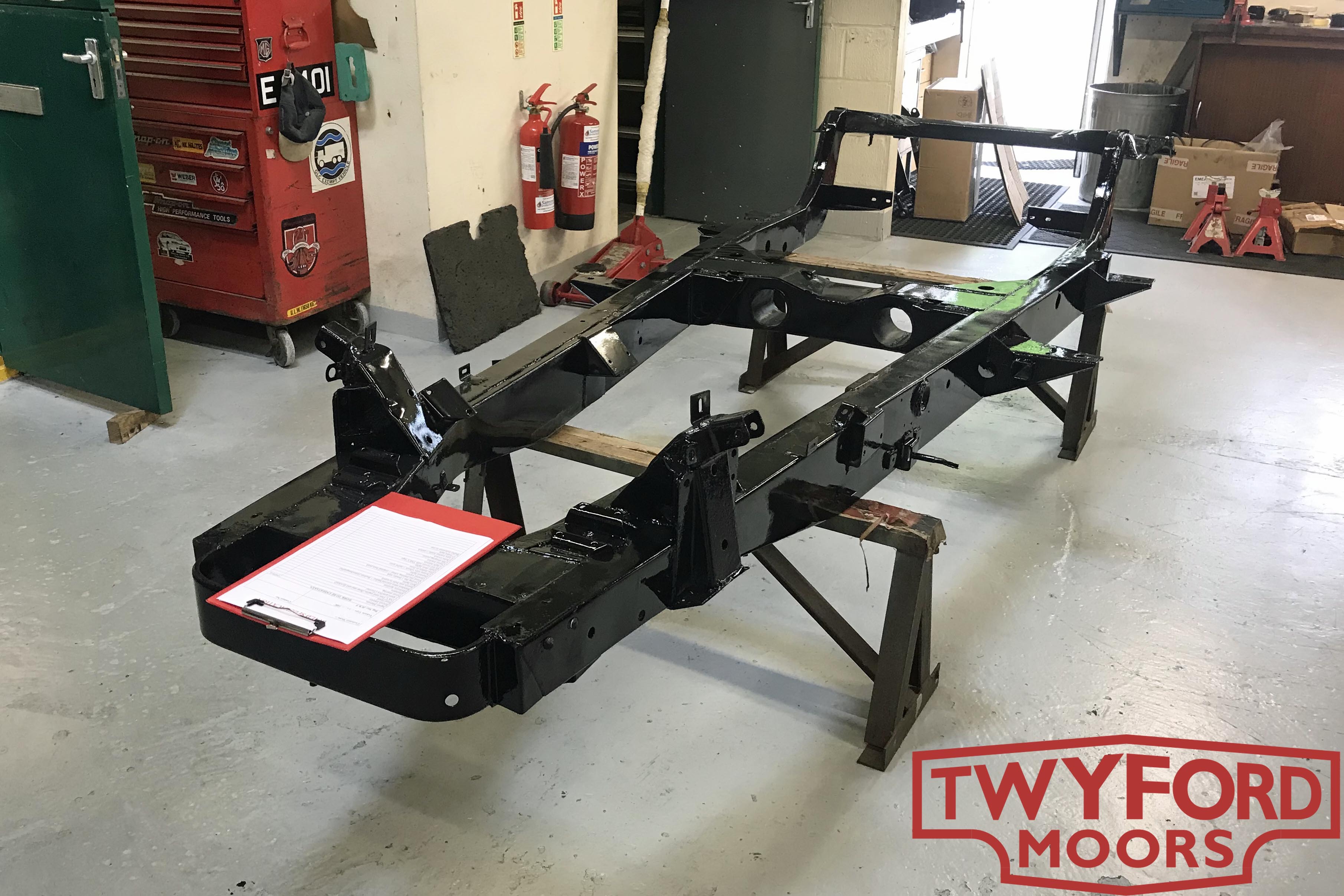 An area so often overlooked but vitally important to a safe and reliable classic is the electrical system. We frequently see very smart cars that are still running their original wiring complete with overspray and electrical tape repairs. Add to this the increased demand put on electrical systems by modern upgrades such as cooling fans and electric power steering it is hardly surprising that cars suffer breakdowns due to electrical faults.
This lovely XK150 drophead is just such a car. It has been rebuilt and upgraded for modern driving conditions and the owner has covered many miles in it without mechanical issue however hardly a long journey would go by without an electrical mishap, often relatively minor. We had reported that the wiring needed replacing on previous visits, so the owner waited until the time was right for him and has now brought the car in for a full rewire. The old, perished wiring is out, along with some very questionable old repairs hidden behind the trim involving twisted wires and blue electrical tape, and new wiring is being run in. At the same time, we will take the opportunity to overhaul the switch gear, light units, fuse boards and anything else requiring our attention. 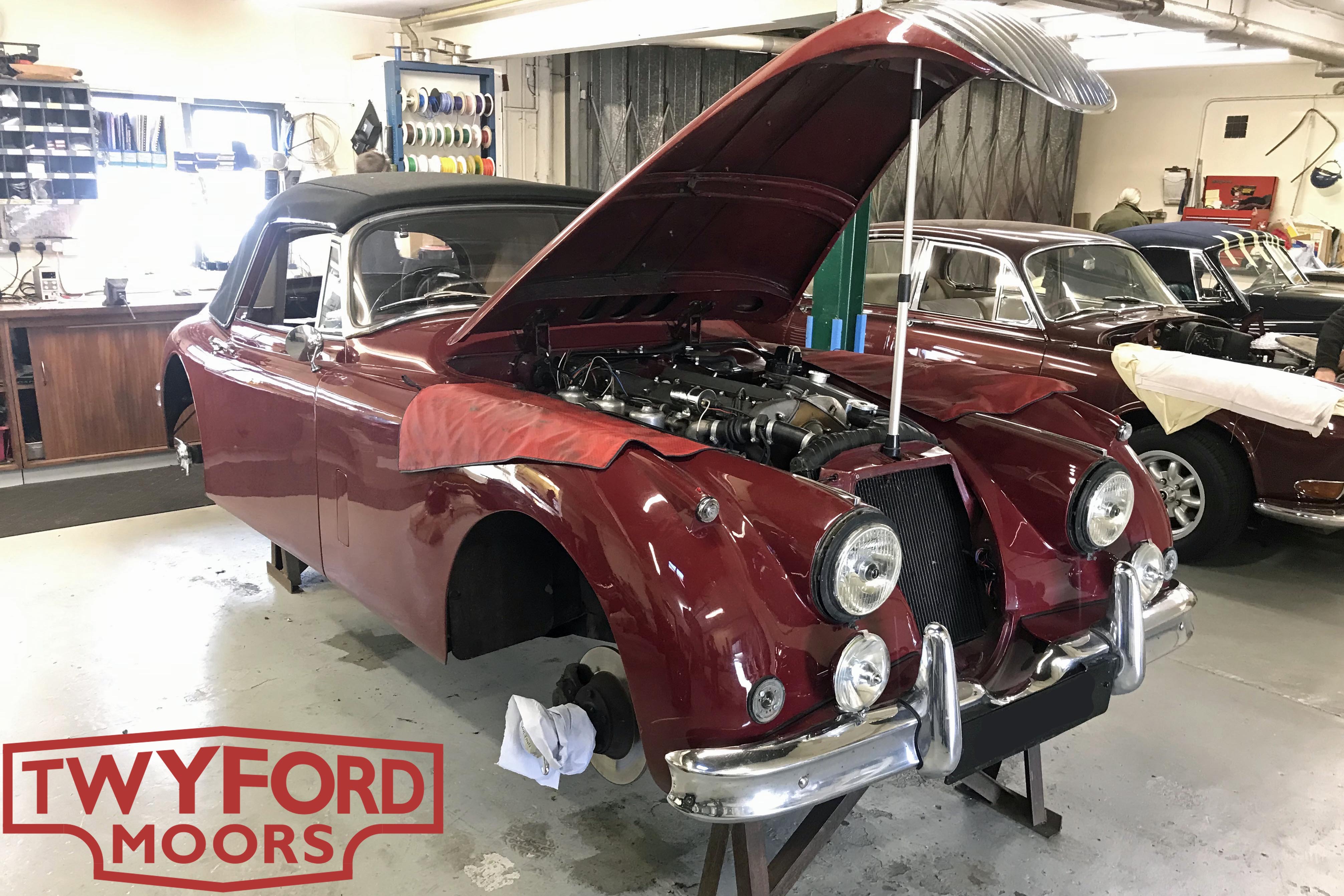 Play in your steering can really ruin the driving experience of a classic car. Worse still it can be dangerous and in excess is an MOT failure. This is a problem we frequently see in the Jaguar saloons. One of the most common causes of this on the later MKIIs, S-Types, Sovereigns and other Jaguar saloons of the period is play in the universal joint on the lower steering column. This was quite an advanced design at the time using a socket and nylon rollers. Unfortunately, the socket and rollers wear overtime and although the rollers can be replaced there is not a supply of the sockets. So over time the rollers get replaced but the slow wear on the socket gets worse and worse.
Pictured here is the original lower steering column from a MK2 next to the new replacement lower steering column our team have sourced specifically for the job. This new lower column fits perfectly in place of the original unit thus illuminating the play from over 50 years' worth of wear. If you have been struggling to resolve play in your saloons steering, please get in touch to see if we can resolve it. 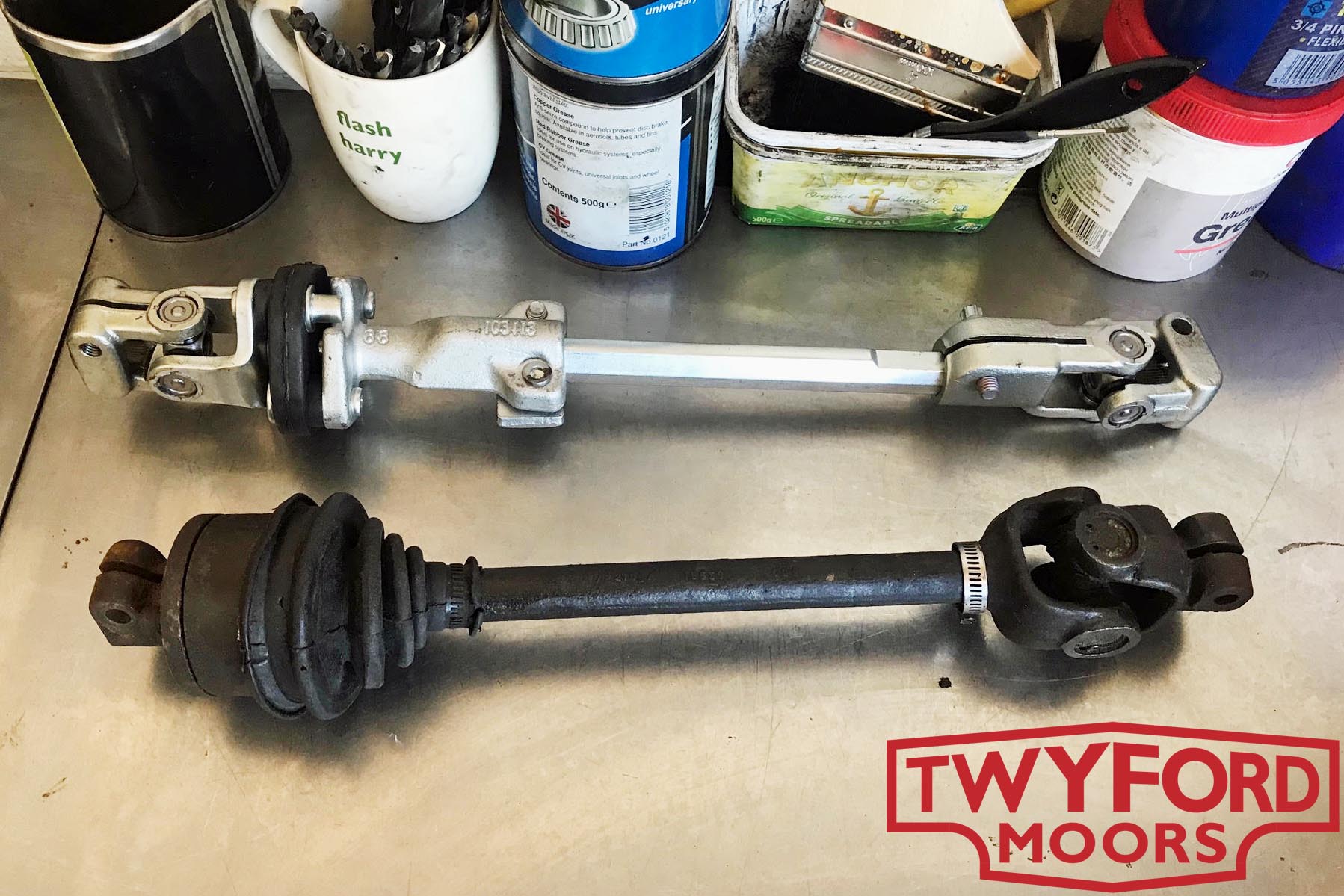