Despite the ever-present and recently increased spectre of this dreadful pandemic we are getting into the festive spirit here at Twyford Moors. The Christmas tree is up with a Leaping Cat taking the place of the usual Angle or star and a variety of vintage Jaguar badges as decorations. The office and workshop also have a sprinkling of decorations and we are all looking forward to a well-earned break for the festive period after what has been an extraordinarily busy year in the workshop. We will be closing on Thursday the 23rd of December and will not reopen until Tuesday the 4th of January to give our staff some much needed time off with their families.
We obviously cannot avoid the subject of Covid-19 and the threats that the new Omicron variant may pose. At this time, we are taking a cautious approach and reintroducing a number of measures. We hope this will allow us to keep working as normal and keep both our staff and customers safe. With luck this new variant will not prove as dangerous as initially feared. Please read on for the detail on the measures we will be employing.
In this weeks’ update we look at a lovely XK140 FHC, a rather special V12 E-Type, an XK150 restoration and more besides. 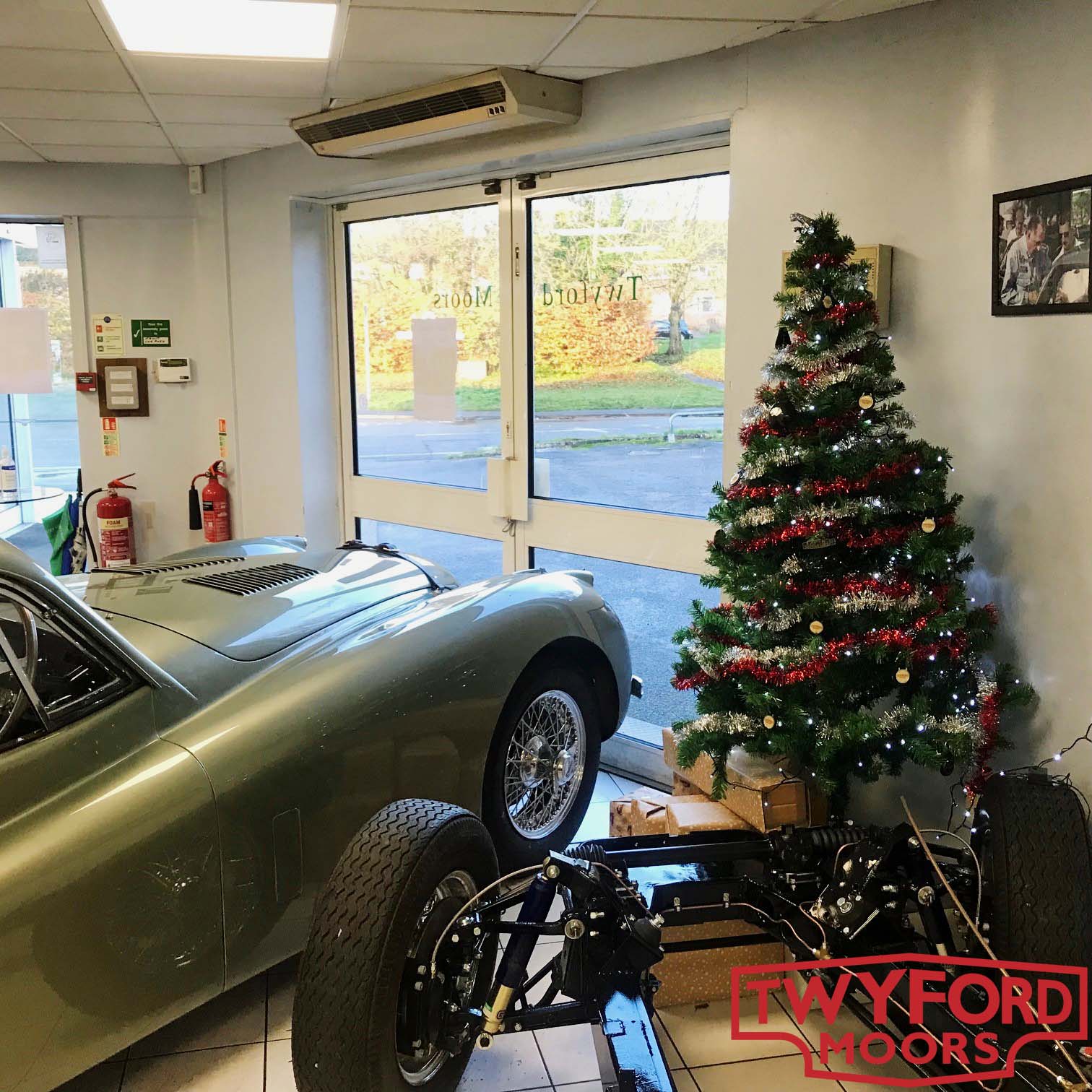 With the warnings around the new Omicron variant of Covid-19 combined with the winter months setting in we have taken the decision to strengthen the measures we have in place to keep both staff and customers safe. We are exercising this cautious approach in the sincere hope that it will avoid any interruption to the progress of work both in the workshop and our showroom.
We would ask that all visitors wear a face covering when on site. If you wish to visit, please call or email in advance to book an appointment and we would be grateful if you could carry out a lateral flow test before visiting. For our customers comfort and safety, we have created a new customer waiting room off of our showroom. We ask therefore that no customers enter the office. Test drives remain available by appointment. Equally we ask that no visitors enter the workshop unless invited to do so.
In addition to these measures, we have various protocols in place on site including increased cleaning and sanitation. We would like to thank everyone in advance for their cooperation with these measures which will allow us to operate safely and still welcome customers to visit. 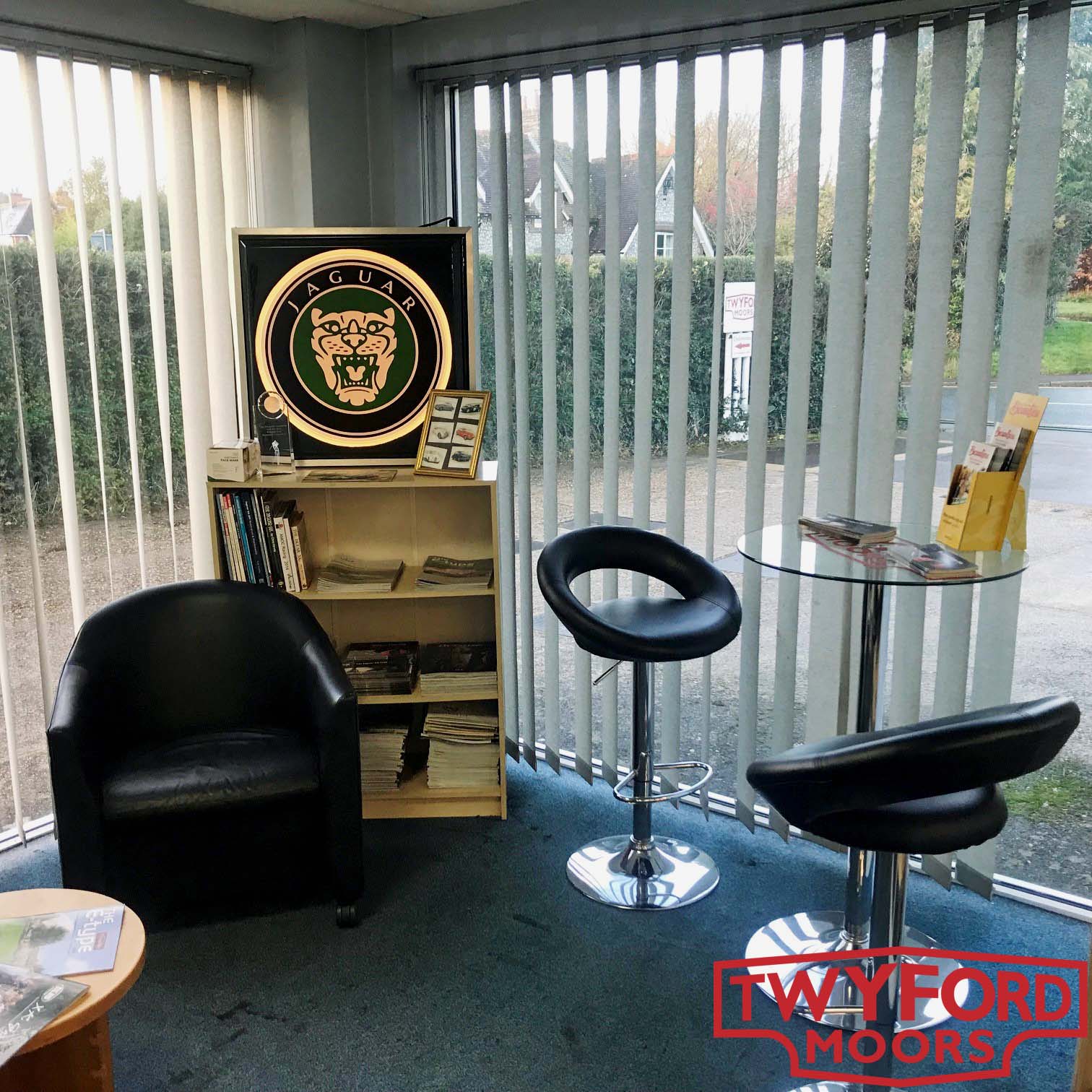 As I was sat working in an E-Type the other day I looked out across the workshop and was greeted this rather wonderful site of a row of heads poking up out of various classic Jaguars. These posts usually focus in on work we are doing on individual cars but I felt this image gave the opportunity to take a broader look at the average day in our workshop.
In the foreground you can just catch the corner of the Primrose Yellow Series 1.5 E-Type we are currently restoring. I (Harry the Assistant Manager, Auto Electrician and the man responsible for writing these updates) have been wiring it up over the past few days, testing the electrics and getting it ready for the engine to be started.
The next car is a rather nice and early Series 1, flat floor, 3.8 E-Type Coupe. Martin can be seen here fitting electronic ignition. Martin is well respected for his many years of experience in the historic motorsport industry and is now lending his extensive talents to servicing and restoration here at Twyford Moors.
Sulking low behind the E-Type you can just make out the lines of a D-Type replica having a starter motor fault investigated by Jonny. Jonny joined us after he left the Army over five years ago. He started out driving our tow vehicle and as a workshop assistant but has trained with us over the years and is now one of our highly valued mechanics.
Right at the end of the row Marc can be seen fitting the door mechanisms and sound deadening to a Jaguar XK150 undergoing a full restoration. Marc has decades of experience in the classic car industry and is our guru when it comes to making all the fiddley bits of these cars fit together and work properly. 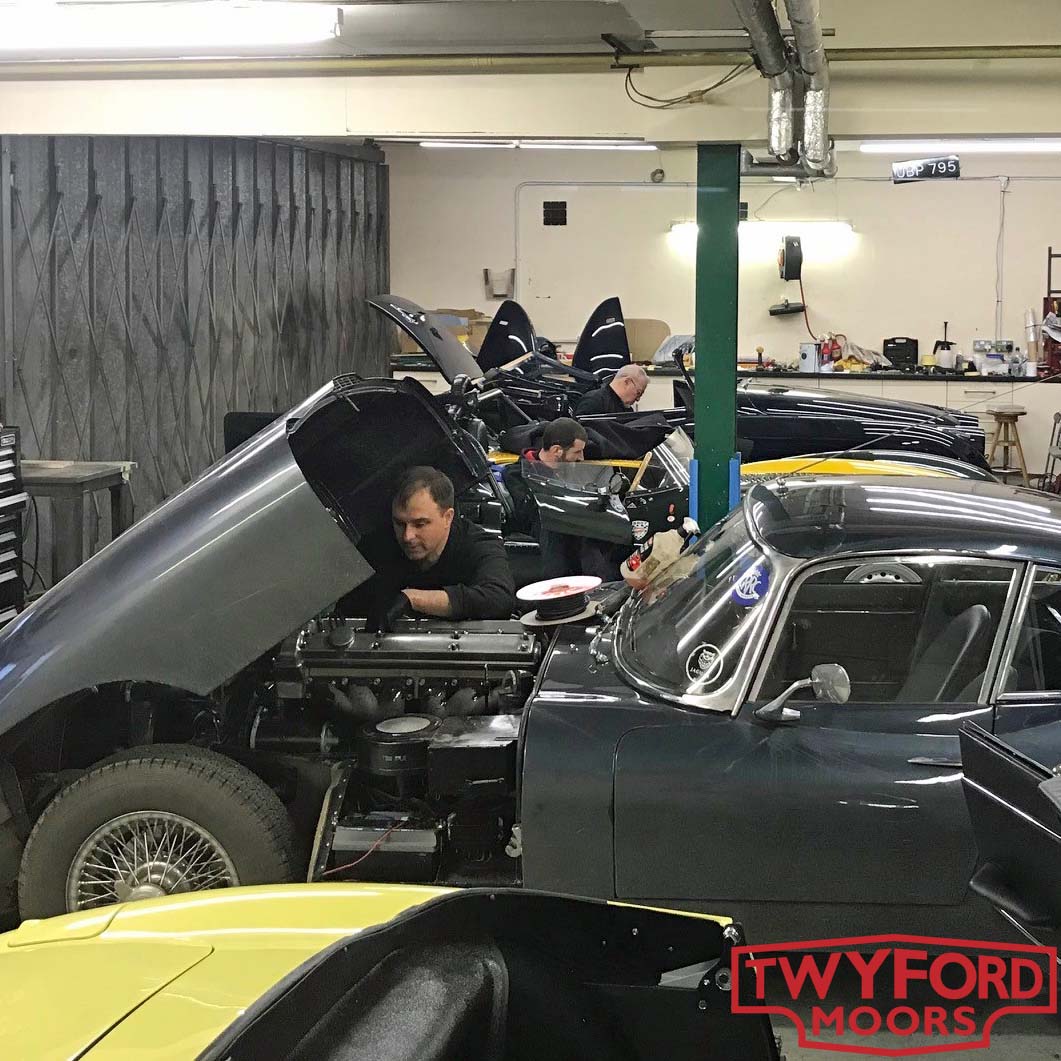 Swift progress continues on this XK150 drophead coupe restoration which we featured last week. The body has now been fitted to the chassis and work has moved onto fitting the rest of the car together. The floors are now in place along with the flap through to the boot area. All the wiring had already been run in so this can now start to be connected up. The linkage for the upgrade wiper system has been custom made and the full system is now in place. All small pieces in the puzzle but all progress in the right direction.
Pictured here is the door release mechanism restored and ready to be fitted. It is not uncommon to see these left in place and simply painted over as they cannot be seen but we like to do things properly here. More over if they are left in place they often get clogged up with paint, old grease and dust from filler/polish which can stop them operating properly. Whilst these are installed sound deadening will be fitted to the inside of the doors. This reduces ‘drumming’ and gives the car a more solid feel. The doors will also have cavity wax applied before being trimmed to ensure they are fully protected for the future. 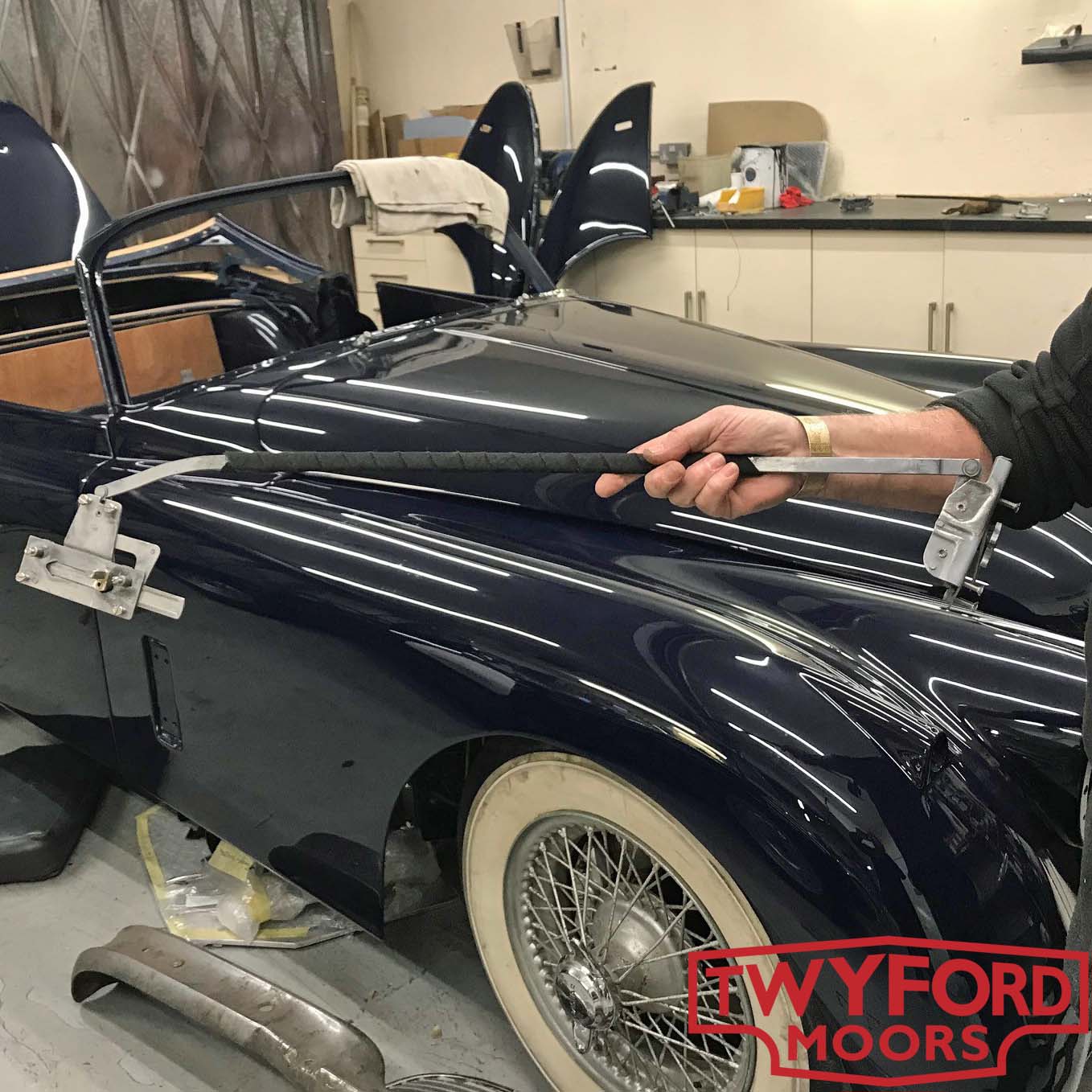 The latest car to be prepared to leave our showroom and head off to a new home is this stunning XK140 fixedhead. These cars are wonderfully practical with plenty of interior space and the usual performance you expect from an XK.
This Jaguar XK140 FHC is an original UK, right-hand drive car. It was originally dispatched in August 1955 and sold by Ernest W Hatfield Ltd of Sheffield. The first owner was a J W Beevers also of Sheffield and the car still wears its original number plate of VWB 88. A full nut and bolt restoration here at Twyford Moors was completed in May 2000.
Pictured here the car is just being moved onto one of our ramps to be checked though and serviced ahead of being MOT’d. All cars we sell from the showroom come with a fresh service and MOT so the buyer can drive away with confidence. At this point we often also carry out and upgrade work or alterations the new owner may want on the car to suit their needs. There is such a broad spectrum of tastes when it comes to how a classic car should be built that we often find new owners wish to customise their new car in some way. This can be anything from electric power steering to inertia seatbelts to match the interior trim. 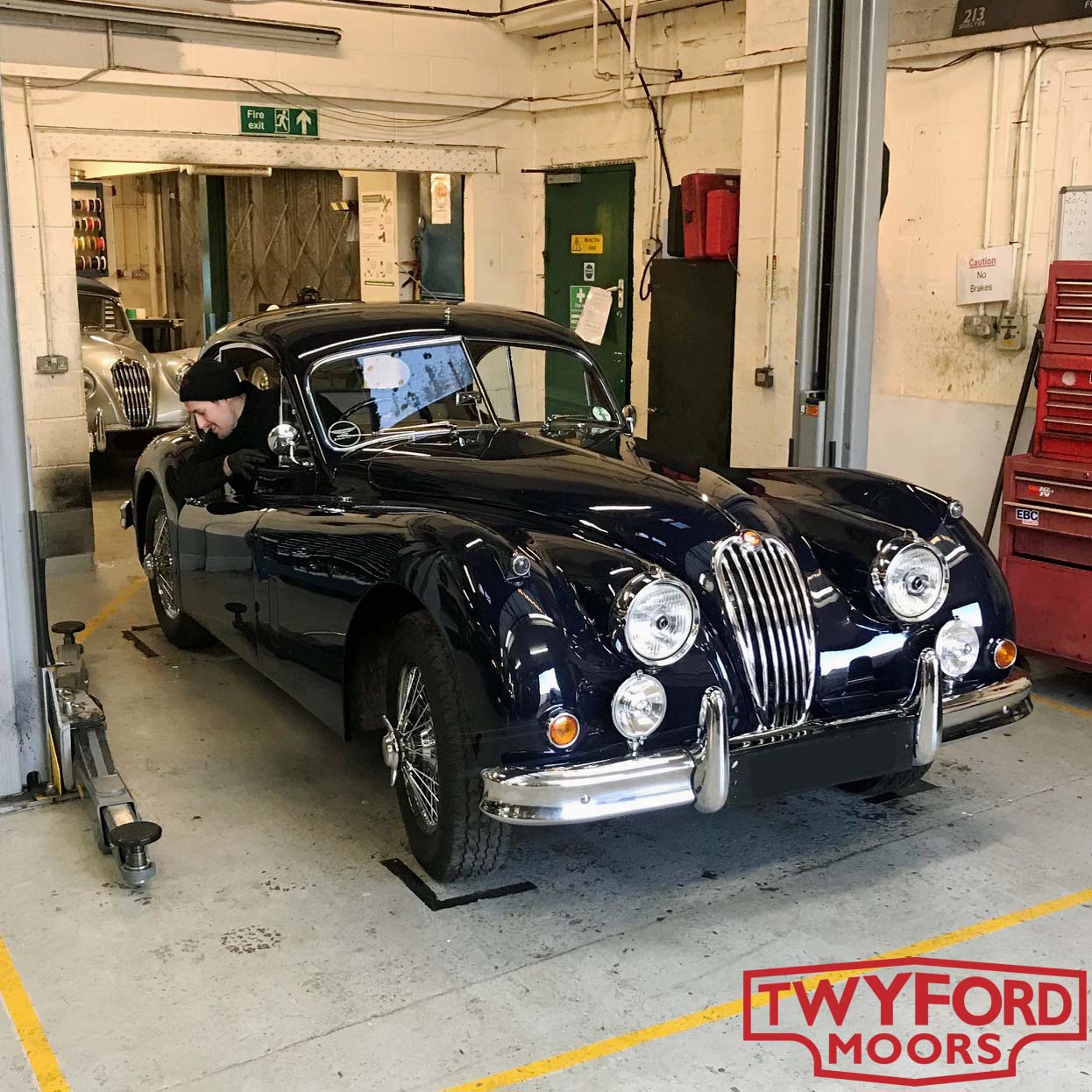 In this month’s XK Gazette our long-time customer and friend Tony Hall takes a look back over his many years of XK restoration and ownership. He shares some of what he has learned along the way and offers guidance to those thinking of buying or restoring an XK. This month’s magazine also features some other great articles. Our highlight this month is a reprint of Philip Porters interview with Bob Knight, the XK120 chassis designer, from back in 1998. What a rich history and archive the XK Club has!
If you are not familiar with the XK Gazette it is the monthly magazine published by the XK Club and is included in the cost of membership. It is a great read every month featuring technical articles, contributions from owners and enthusiasts. There are fascinating dives into the history of the cars we love from some of the most world-renowned experts including Philip Porter and Malcolm McKay. If you are not yet a member, we would strongly urge you to join up and start enjoying the magazine along with the other benefits the XK Club offers. 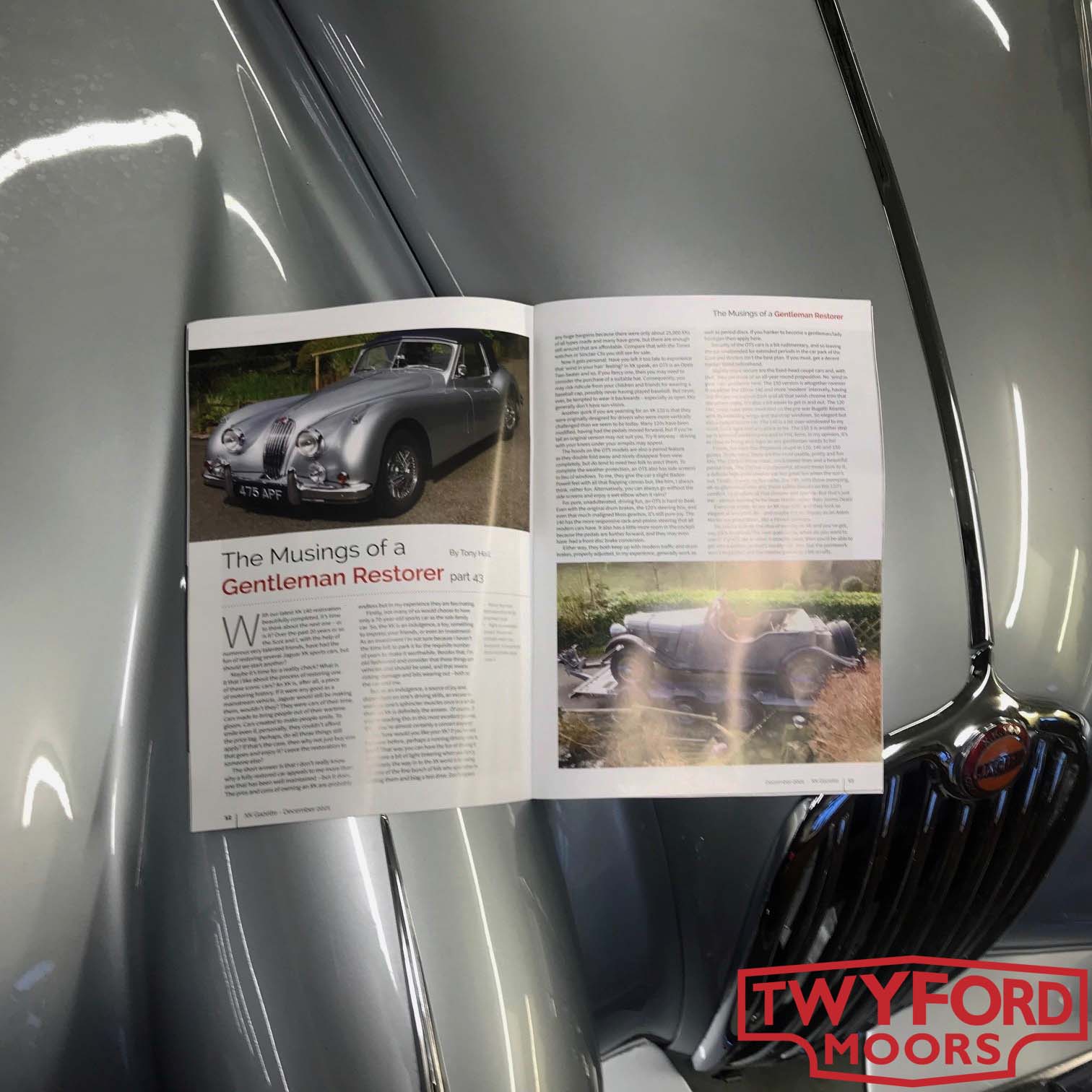 We currently have a rather special Series 3 E-Type in with us which is fuelled by six twin choke Weber carburetors. The owner, who is not UK based, has struggled to find a garage to get the car running properly so has brought the car over to us for a tune up, a check over and a few other jobs whilst it is here. As we have noted in recent posts, we are big fans of the V12 E-Type and have been seeing more of them in the workshop in recent years. This however is a very different beast. Where the standard V12 engine is a rather lazy, torquey and smooth engine suited to the long-distance cruiser that the Series 3 is, the addition of Weber carburetors (and a few other tweaks) has transformed the character to this engine. The sound this thing makes is incredible! The pickup when you open the throttle is so much quicker and the engine becomes much keener to rev. It would be interesting to do a rolling road comparison to see how much of a difference this all makes power delivery wise but it seems significant. Of course, one cannot just go changing the carburettors on an engine and expecting more power, but mated to the right engine and the right exhaust this is quite the combination to behold. Perhaps the V12 E-Type really does have the potential to be a sportscar in the same ways its predecessors were when built to the right specification? 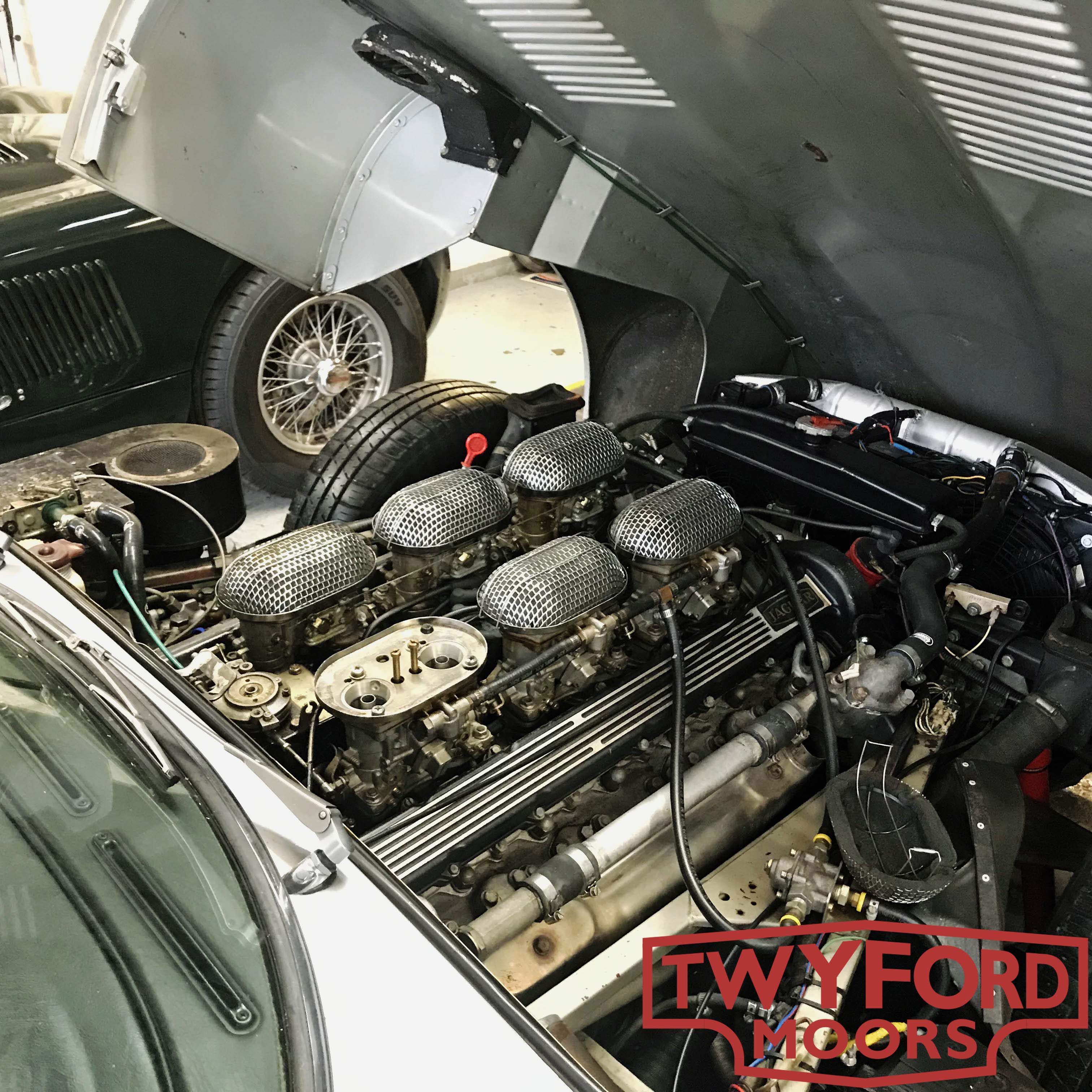