Modification and upgrades on classic cars is always going to be controversial; however the owners of classic cars, understandably, want to get as much use out of them as possible. To that end we have developed a range of modifications and upgrades for the XK120, XK140 and XK150 to make them more useable and pleasurable to drive in the modern day. These modifications have been developed with the specific aim of leaving the car looking as visually standard as possible and maintaining the 'connected', classic driving experience, which is after all a major reason for having a Jaguar XK.

In this article we will be focusing on our 5-speed gearbox conversion for the XK120, XK140 and XK150. We have fitted, tested and worked with many different gearbox setups over the years. From XJ overdrive boxes to Getrag five speed gearboxes we have tried most but have settled on our current setup as it offers the optimum combination of usability and feel, flexibility of gear ratios, reliability and ease of fitment.

Jaguar XK120, XK140 and XK150 5 speed gearboxOur 5-speed gearbox modification, using a Tremec T5 (Bourg-Warner design), fits to the original XK bell housing. Using a modified adapter plate between the bell housing and gearbox it allows the clutch mechanism to be left totally original. Additionally we offer a hydraulic clutch conversion for the XK120 and XK140 bringing them up to XK150 specification. The original gear leaver and knob can then fitted to the gearbox. These come out in almost the exact same place as the Moss 'box leaving the interior of the car looking totally standard, such that no one could tell you a five speed gearbox was fitted without looking under the car or driving it.

Another huge advantage of this five speed 'box is that the combination of it's size and the way it is fitted to the bell housing allows us to remove it though the car by taking out the interior and gearbox tunnel. This means that changing a clutch is much quicker, easier and ultimately costs less than with the original Moss gearbox (which on most XK models require the engine and gearbox to be removed as a whole to change the clutch). 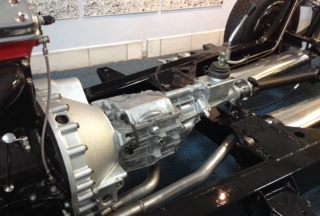 Five speed gearbox - XK150, XK140 and XK120Our 5-speed gearbox's feel direct, mechanical and in keeping with the period of the car, as apposed to the overly modern feeling, loose and vague alternatives available. These upgraded boxes allow for much quicker progression though the gears than the standard Moss gearbox ever did (let alone with worn syncros) and has synchromesh on all five gears allowing you to change down to first gear without coming to a complete halt. We can offer five speed gearboxes with a range of different gear ratios to suit any application from matching the original ratios of an overdrive 'box for comfortable cruising to close ratio gearboxes for those with sportier aims.

If a 5-speed gearbox is not your cup of tea we also rebuild original Moss gearboxes and can even convert your Jaguar XK to have an overdrive gearbox if not originally fitted. Please get in touch for more information.

We offer an extensive range of other modifications and upgrades for the XK120, XK140 and XK150. Please click here for more information.