With the clocks turned back we are now settling into the flow of 'winter work' with many a long-term project coming in and cars being prepared for winter storage. This week's update takes a look at 'pumpkin' cylinder heads (in honour of Halloween), SS100 rear axle rebuild, XK engine oil leaks and a Fiat 500 which has snuck in amongst all the leaping cats. 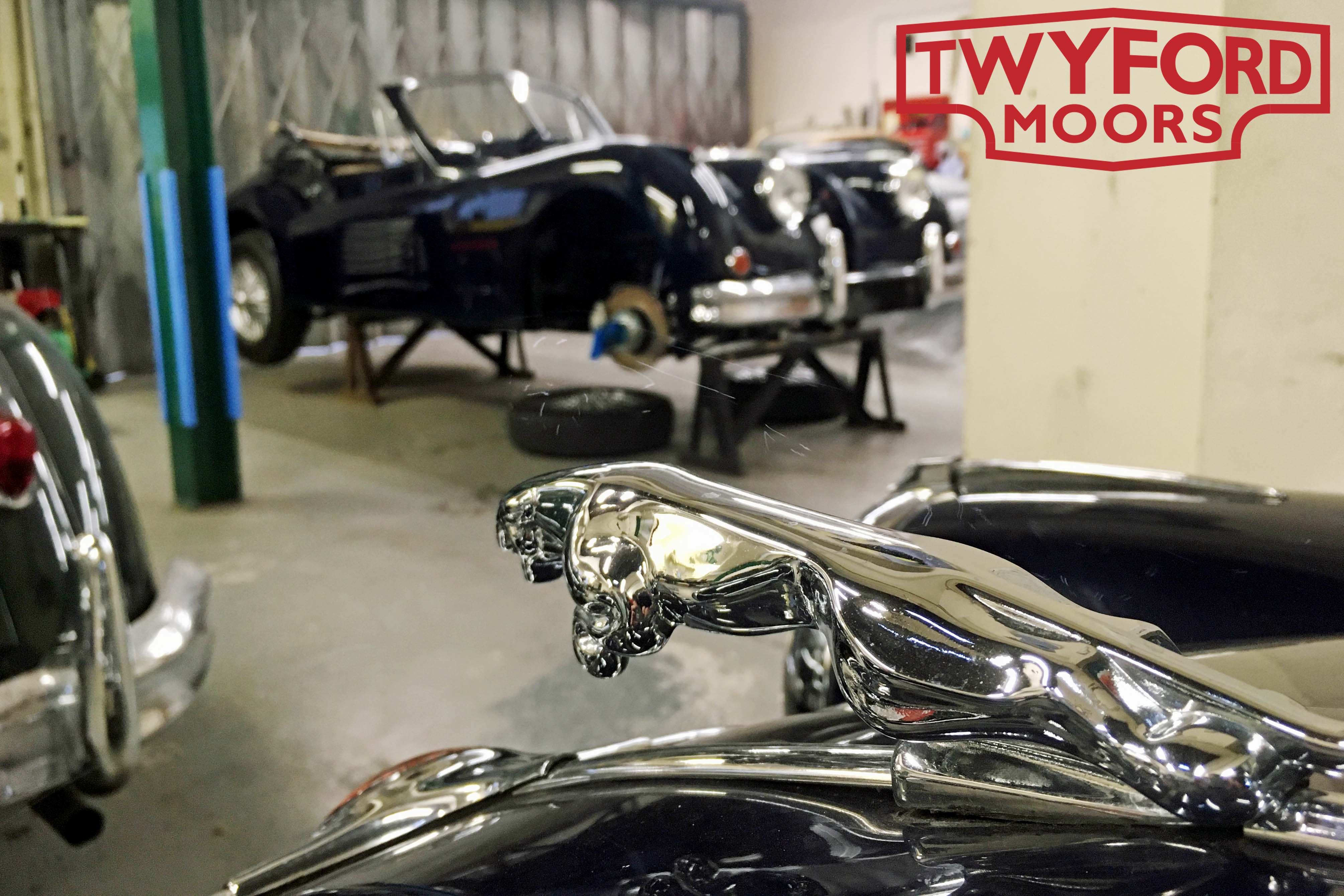 Some find the colour of these cylinder heads down right spooky! We are often asked at shows "why did you paint the cylinder head that colour?" or similar but less politely phrased versions the same question. The answer is that we paint them pumpkin (not orange!) because that is the colour Jaguar painted them originally. Jaguar colour coded all XK cylinder heads other than the early XK120s and there appears no rhyme nor reason to the colours chosen for each specification. What is clear is that Pumpkin was certainly the most "out there" colour choice Jaguar went for.

In 1958 Jaguar released the XK150 S. It was an upgraded version of the XK150 with a triple carburettor and a straight port cylinder head intended to compete with ever more powerful American V8 cars in the American market. This new version of the XK cylinder head was the version Jaguar chose to bless with the pumpkin paint job. Although it is described as a straight port head, the ports are not actually quite straight. The head is however a huge improvement over its predecessors in terms of air flow and when mated to triple carburettors and bigger valves really unlocks the potential of the XK engine. Later the XK150 3.8 S was introduced and this engine went on to power the early E-Types. These 3.8 E-Types also sport the pumpkin coloured cylinder head but Jaguar (perhaps wisely) changed over to the iconic gold coloured cylinder head when they introduced the 4.2 litre engine to the E-Type. 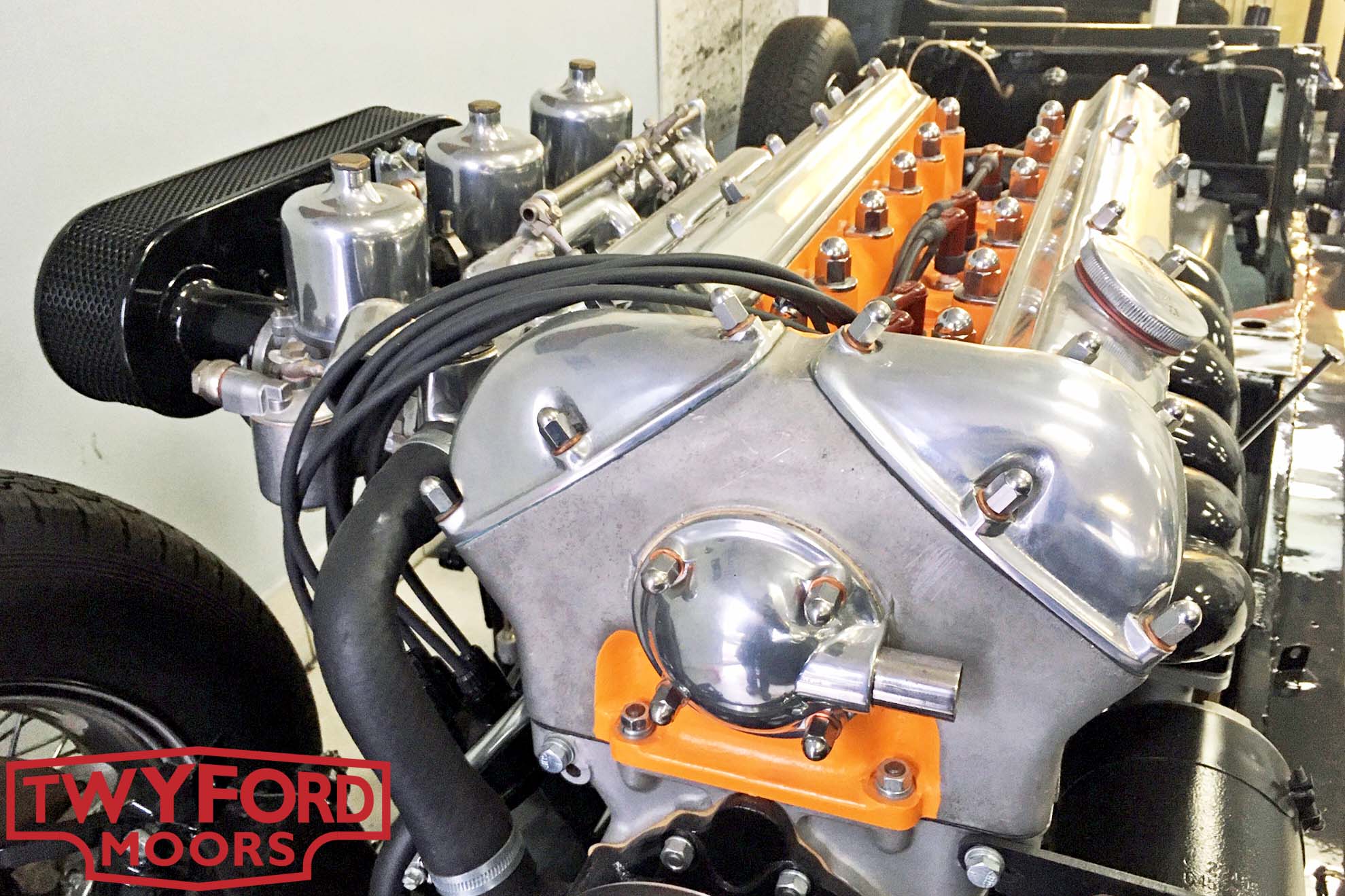 This XK140 DHC has been coming into our Hampshire workshop for many for an annual service and MOT. On this occasion, the customer also asked if we could improve his windscreen wipers, provide some interior lighting (his interior lights had never worked) and get the clock running. These are the sort of small details which really make an XK comfortable and enjoyable to use.
Having discussed the windscreen wipers with the customer he opted for our upgraded wiper system. This not only provides more power but it also gives a bigger sweep on the wiper blades. We then set about repairing the interior light wiring, fitting door switches and fitting our LED footwell lights which are white when the interior light is on and glow a soft red when the panel lights are on for night driving. Finally, the clock was overhauled and upgraded to make it keep good time, without replacing the original mechanism! We will look at each these upgrades in more detail in the future. 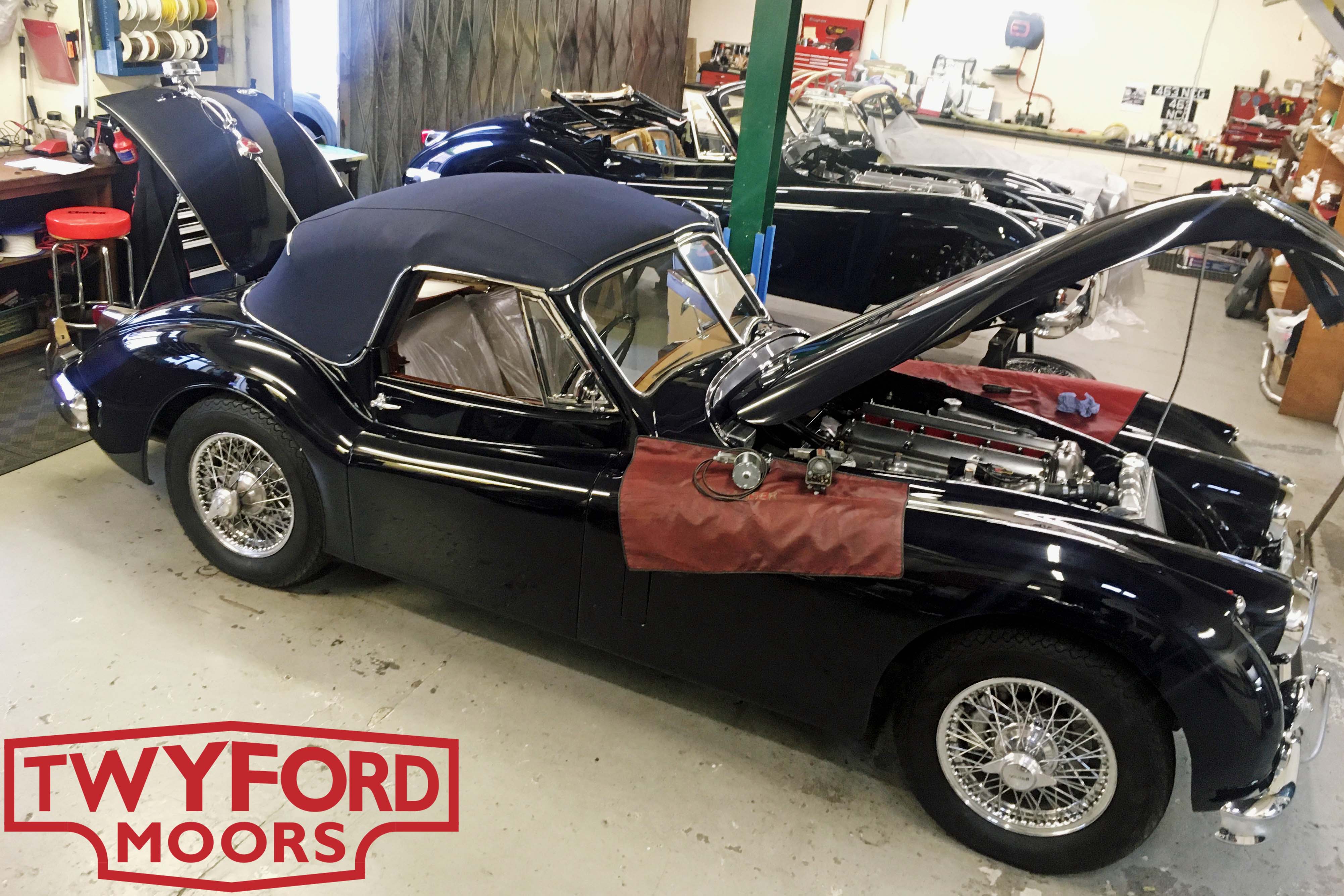 A few weeks ago, in our workshop update we had a look at a stunning SS100 with a rear axle fault. We have since removed the axle and dismantled it to investigate the problem. Our mechanic, Martin, removed the differential and found that several teeth had broken on the crown wheel with corresponding damage to the pinion. Parts for ENV axles are not easy to come by, however we have now sourced a new crown wheel and pinion. Pictured here on the left is the old crown wheel and the damaged teeth can be seen at the top right of the wheel. To the right is the new crown wheel which has been engineered to be significantly stronger than the original. Work is well underway rebuilding the differential. 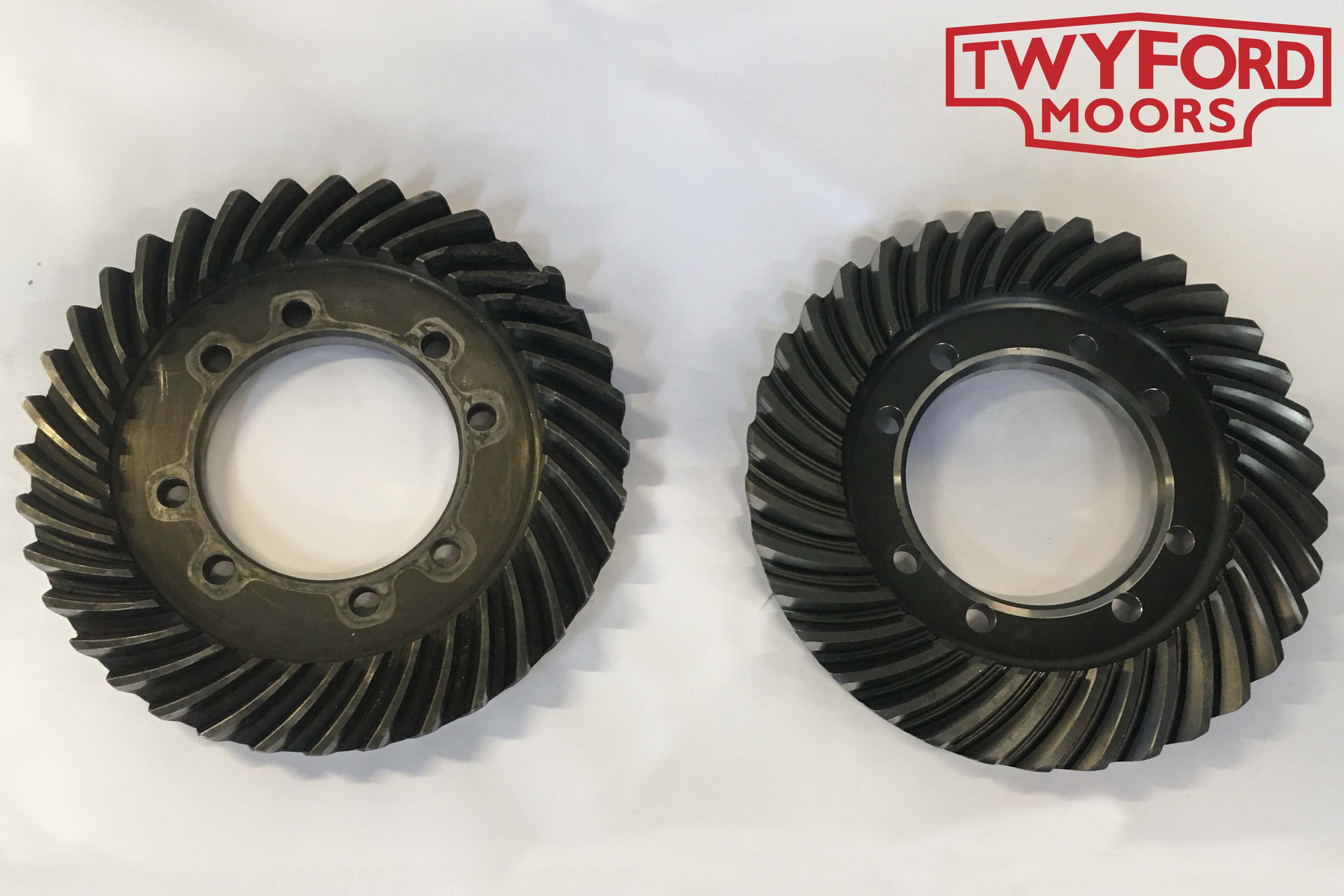 Pictured here are the engine and gearbox for an XK140 FHC just about to be reunited. The original spring clutch has been replaced with a diaphragm clutch. Diaphragm clutches are fitted to modern cars and offer a number of benefits over their coil sprung predecessors. Coil spring clutches loose pressure as the clutch friction material wears away allowing slipping and causing the clutch to wear out more quickly. A diaphragm clutch by comparison provides the same amount of pressure all the way though its life. Being a more modern and compact design, the diaphragm clutch also weighs less which reduces weight on the flywheel allowing the engine to rev more freely. From the drivers' point of view though the biggest benefit is that this upgrade makes the clutch pedal lighter, smoother and more responsive. Before fitting to the car, the clutch is balanced to the flywheel (which is lightened and balanced itself) to give the very best performance.
Also pictured here is our roller release bearing upgrade. This is a vast improvement over the original carbon clutch release bearing as it reduces friction making the clutch operation smoother and quieter. We are also aware that there have been quite a number of issues with carbon clutch release bearings wearing unevenly and braking up over the past few years. So a worthwhile upgrade to avoid such problems. 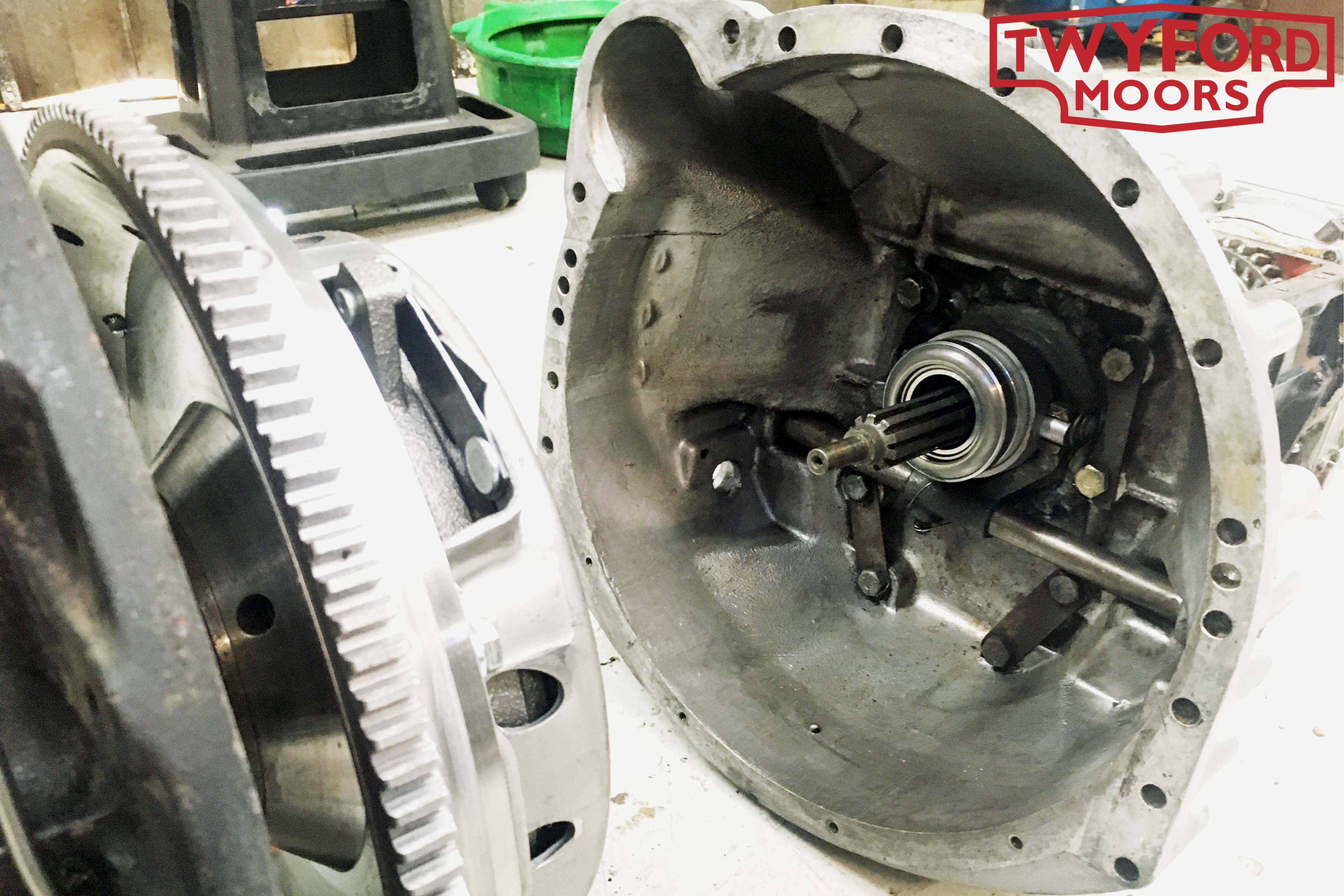 If you visit our Clanfield workshop you will always be greeted by a large variety of classic jaguars but there are often some other classic cars hiding amongst them. This week it was this little Fiat 500 which, being so compact, was hard to spot amongst the jaguars some times. This little Italian classic has just been purchased by one of our regular customers who brought it straight down to us for a check over and some paint work. We are pleased to report the car is in good condition and once it is sporting some black pin stripes it will be ready to return to its owner. 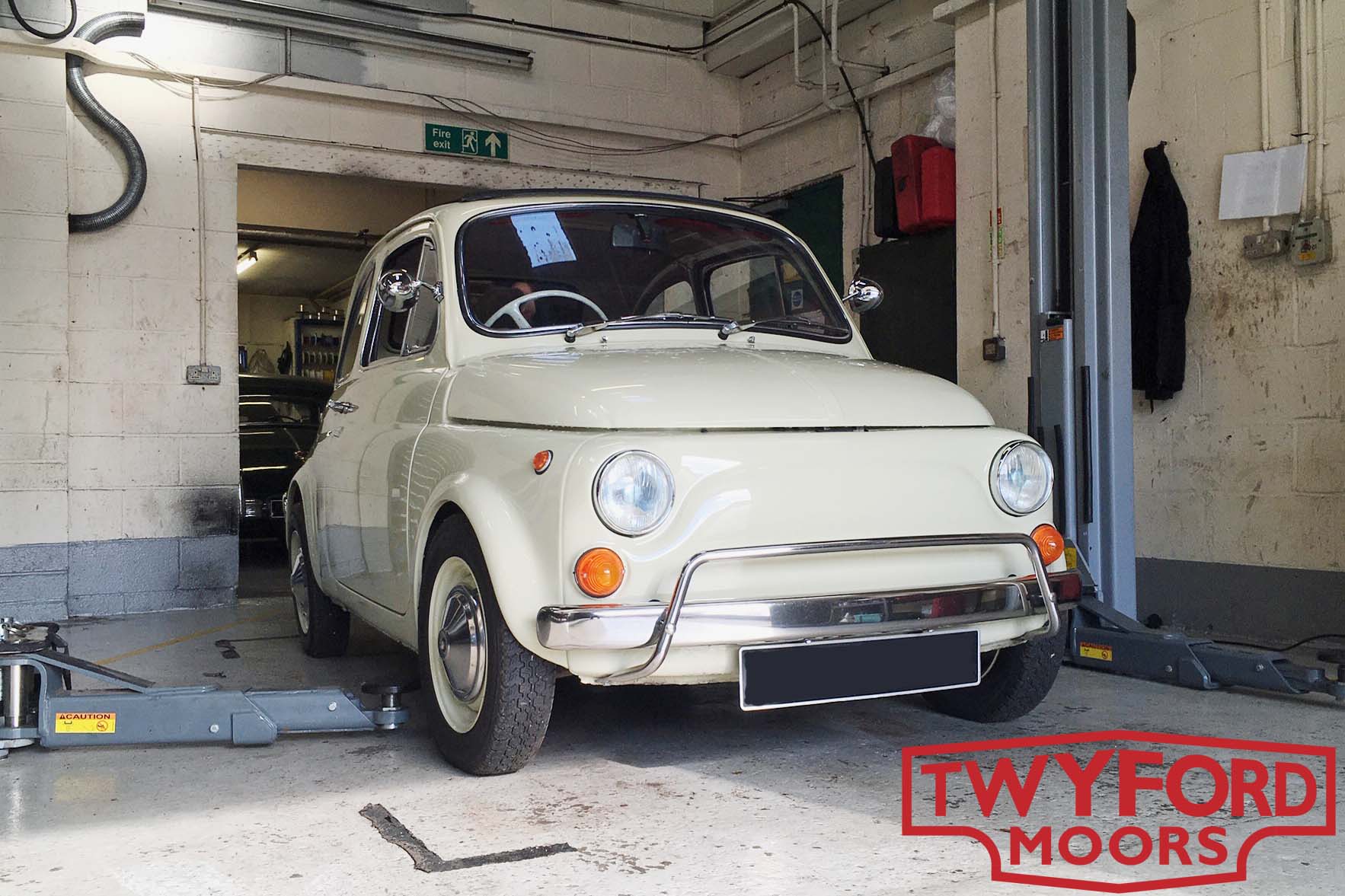 XKs are wonderfully engineered cars however they are known for the oil leaks. Some of these oil leaks are due to the engine design such as the scroll oil seal on XK120 main bearings which requires significant modification to resolve. Others however need not be an issue and are often purely due to the age of the gaskets or incorrect fitting. This XK120 drophead coupe was suffering with some serious oil leaks from a number of locations. The worst culprit was the cam covers. This is a common issue, particularly on early XK120s with 'studless' cam covers. Our mechanic Jonny has set about removing the cam covers, cleaning the mating faces, ensuring the mating faces are flat (the aluminium cam covers can easily be damaged and distorted) and then fitting new gaskets with appropriate sealant. It is vital that the correct type of sealant is used to stop any leaks but also to ensure no damage is done to the engine. Modern silicone sealants can cause major issues as whole chunks of sealant can come off inside the engine and then block oilways leading to oil starvation. 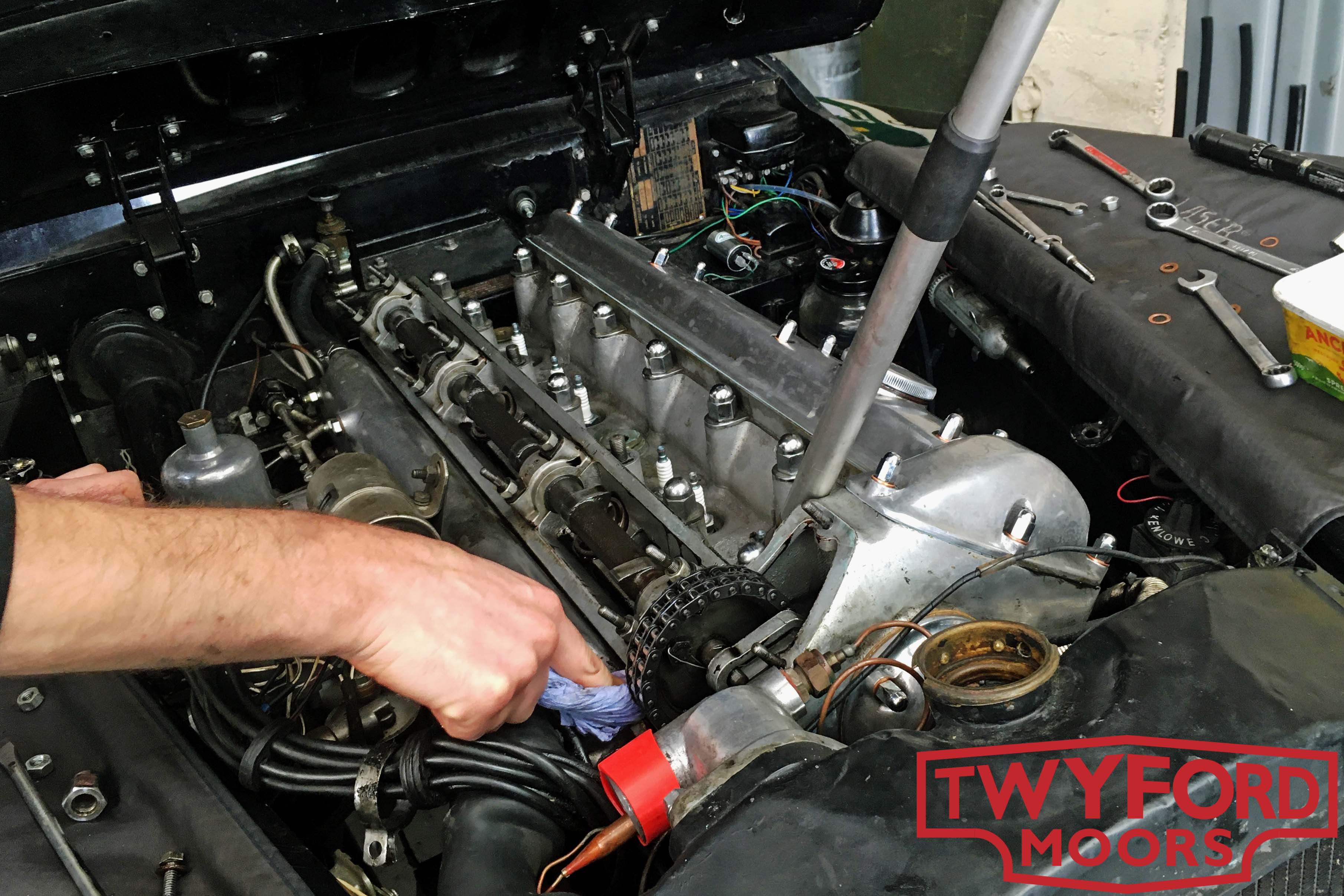