Happy days are abundant in our Hampshire workshop at the moment. We are packed with every variety of XK and E-Type you can dream off along with a few other classic cars. Highlights amongst these in the past week have been the lovely Aston Martin DB2/4 featured in last weeks' update and a super rare Gordon-Keeble we will be looking at in this weeks' update. The weather has been on our side over the last week so we have been able to have the workshop doors wide open, conduct test drives without fear of getting rained on and we have been out for some photo shoots.
This week we will be bring you up to date with a secret filming project which took place last summer and looking at cars passing though the workshop from Gordon-Keeble to Series 3 E-Type. 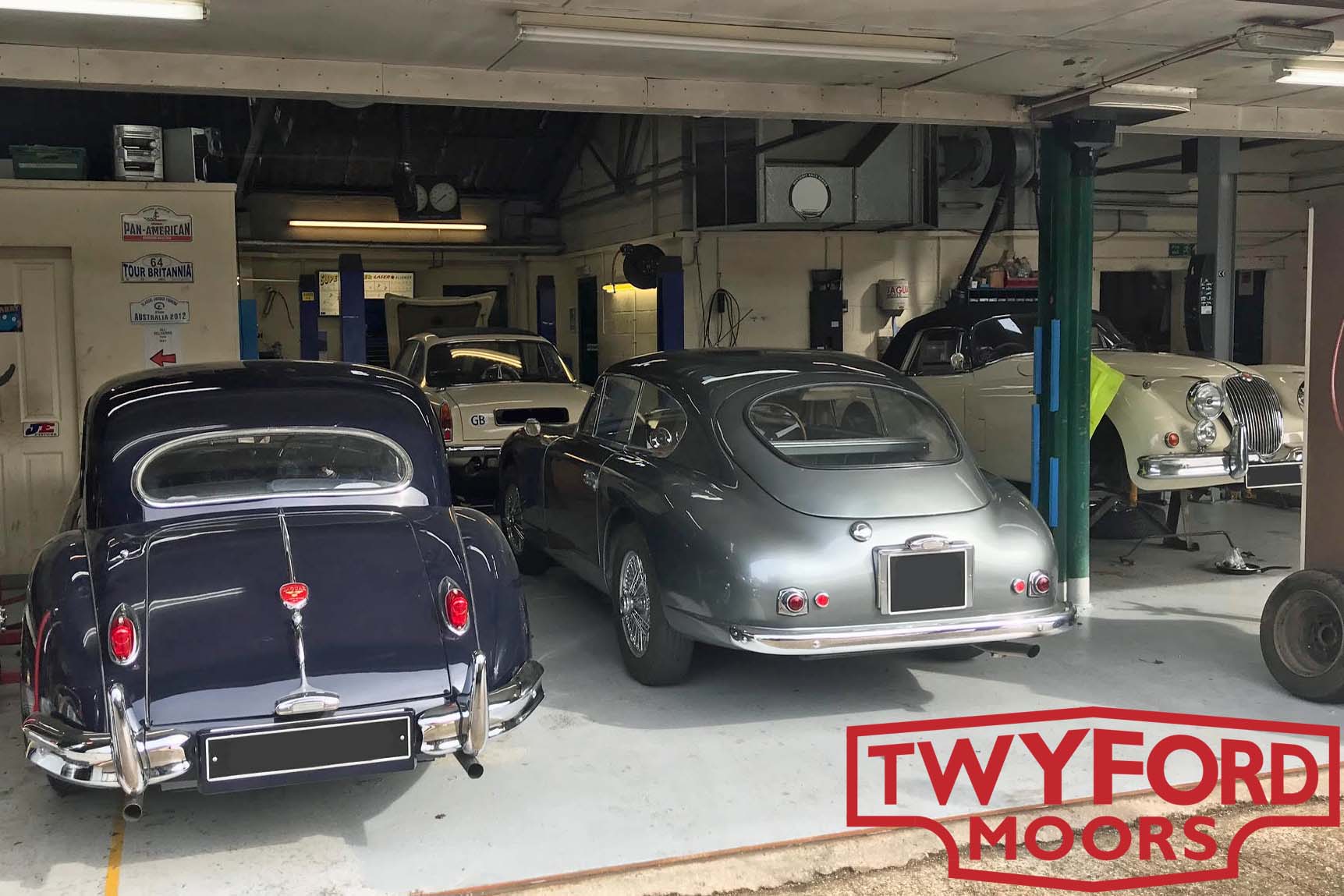 Last summer we were paid a visit by the charming Titch Cormack along with a film crew from Two Four Media. We couldn't divulge details at the time but we are delighted to now be able to announce they were here visiting our fully restored Jaguar XK120 OTS. This stunning car is an exceedingly rare and early aluminium bodied example which we finished restoring in 2019. It was featured in the Freddie March enclosure at the Goodwood Revival that year. The XK120 was chosen for the filming of a series that explores the quickest cars through history, comparing cars of the day with todays' supercars.
The first episode of Secrets of the Supercars will go out on Dave on Sunday the 28th of March at 7pm. It will also be available on UKTV Play after this to be watched at your leisure. Our XK120 will feature in episode three which is scheduled for Sunday the 11th of April. 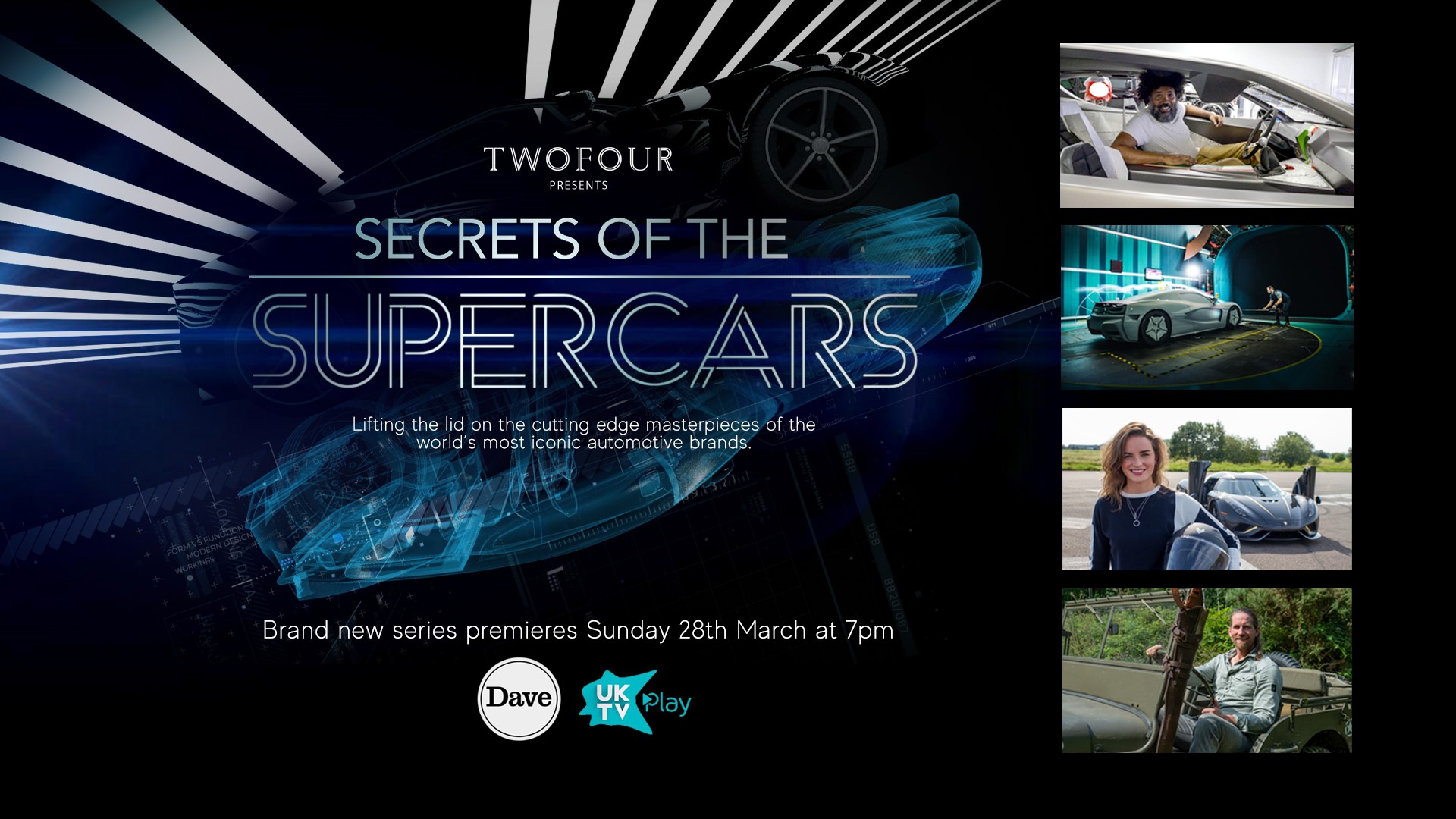 With the recent flurry of interest in the cars we have for sale we are delighted to be getting fresh stock in. This lovely Jaguar XK140 is an original UK, right hand drive car. It is an older restoration which Twyford Moors have know since 2003. This stunning car is finished in its original colour scheme of Suede Green paint with a Fawn hood and is in great condition throughout. It features many upgrades making it a very usable and drivable car in modern conditions. For more information and photos please visit the 'for sale' section of our website.
If you are looking for an XK or E-Type please do get in touch with us to discuss your needs. We have a number of lovely classic Jaguars in stock and even more in our little black book together with extensive contacts throughout the industry so can often source cars to suit fit a buyer's needs.

This months XK Gazette has a great feature on a Jaguar XK140 DHC which we are currently carrying out a full nut and bolt restoration on. This feature is part of an ongoing series by Tony Hall entitled 'Musings of the Gentleman Restorer'. In this series he has been following our full restoration of his XK140 from start the finish. In this months' update he looks at the car being trimmed by our friend Mike Thomas.
The XK Gazette is the monthly magazine published by the XK Club. As part of your XK Club membership you will receive a physical copy of the magazine through your door every month as well as a digital subscription. The wonderful magazine aside we really would urge all XK owners to join the XK Club. They put on some entertaining events and tours ranging from their great series to Round Britain Coastal Drives to wine tasting tours. 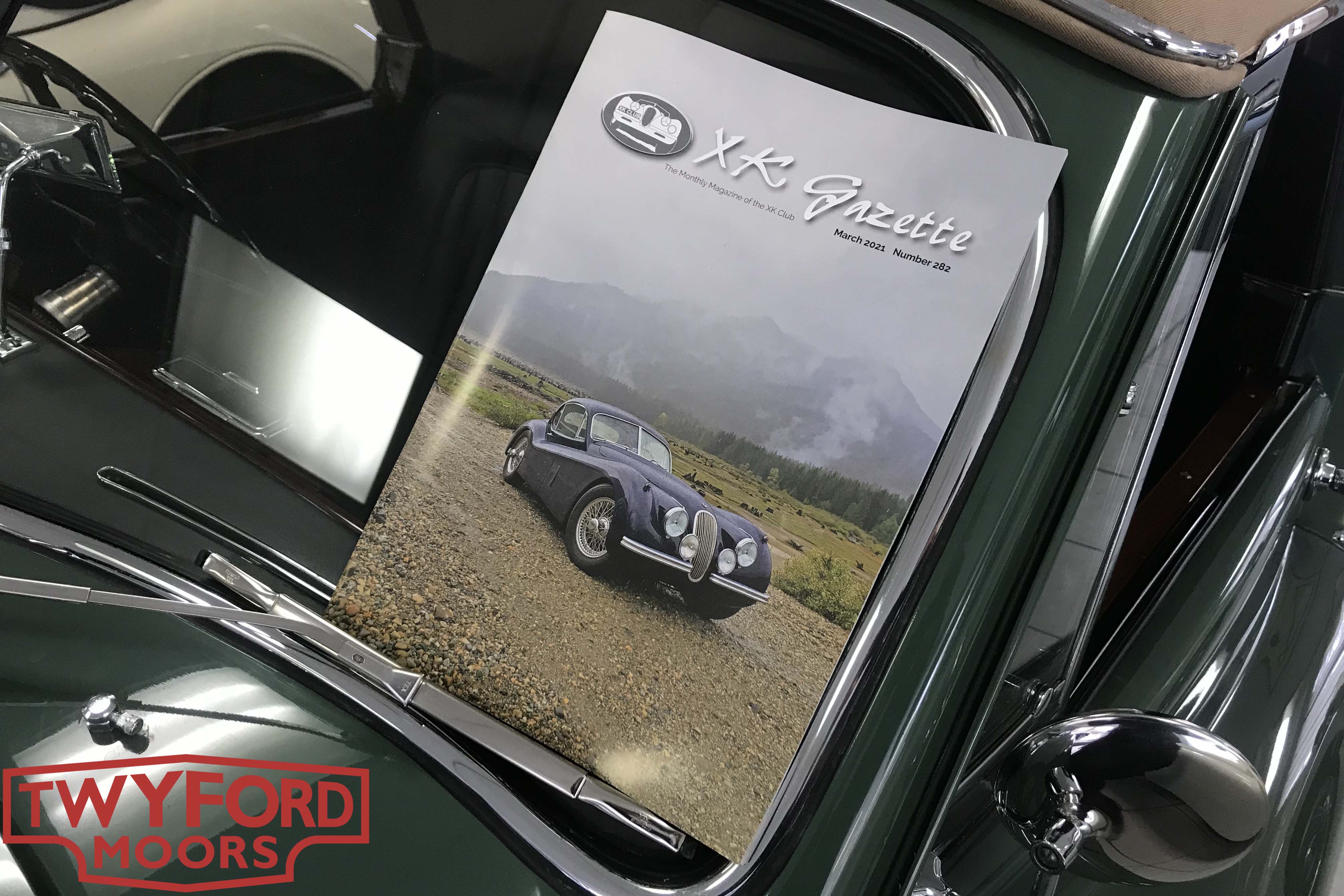 This Gordon-Keeble is an annual visitor to our workshop and has to be one of the rare cars we look after as one of just 100 cars to have been produced. Gordon-Keeble was founded by John Gordon, formerly of Peerless, and Jim Keeble in 1959. The car is based on a square-tube steel spaceframe chassis with independent front suspension, all-round disc brakes and a Chevrolet V8 engine. The prototype body was designed by Giorgetto Giugiaro and built by Bertone in Italy however when the car went into production the body was changed from steel to glass fibre and produced in the UK. Only 100 cars were produced between 1964 and 1967 in which time production was moved from Slough, to Eastleigh and then finally Southampton.
The marque is notable as having a tortoise on its badge. This is reputed to be because during a photo-shoot for the cars a pet tortoise walked into the shot. It was felt that the irony of a slow tortoise made it an appropriate bonnet emblem. 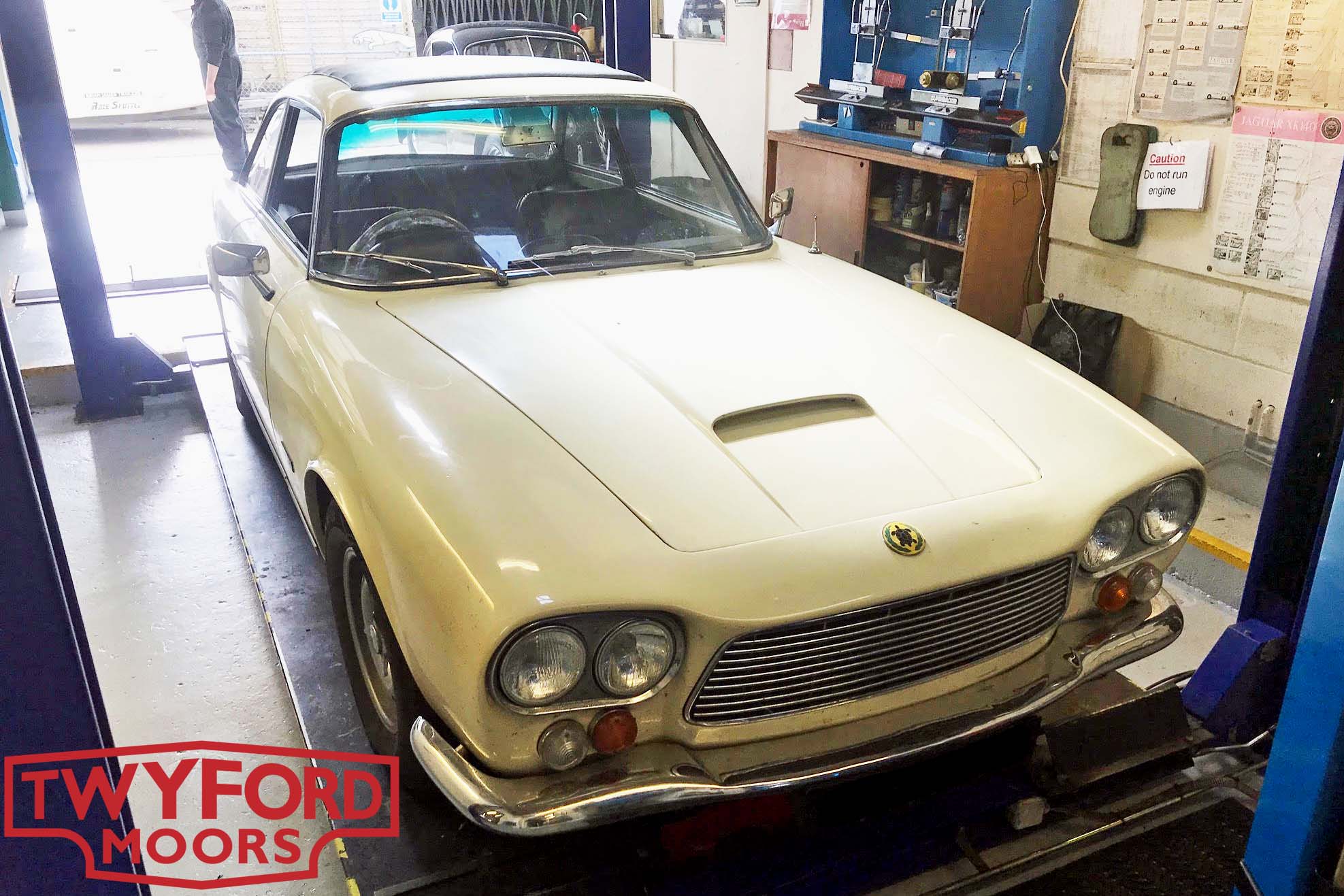 There are plenty of E-Types in our Hampshire workshop at the moment. Pictured here is a Series 3 V12 E-Type in the foreground and a 4.2 Series 1 E-Type behind it.
The Series 3 is in with us for a full service, MOT, check over and 'advise'. We are seeing more and more of these lovely late E-types in the workshop. We are hearing from many customers that they struggle to find mechanics both capable and willing to look after these V12 E-Types. It seems this is because of the complexity of the fuel systems on them, particularly the emissions controls. Our experienced team have all the knowledge required to get these cars running properly and provide the care they deserve.
On the subject of E-Type please don't forget that E-Type 60 is fast approaching on the 12th and 13th of June. This event is being run by the E-Type Club and will be held at Shelsley Walsh hill climb. It promises to be the biggest gathering of E-Types in 2021. If you have not booked your ticket yet please head over to the E-Type 60 website. 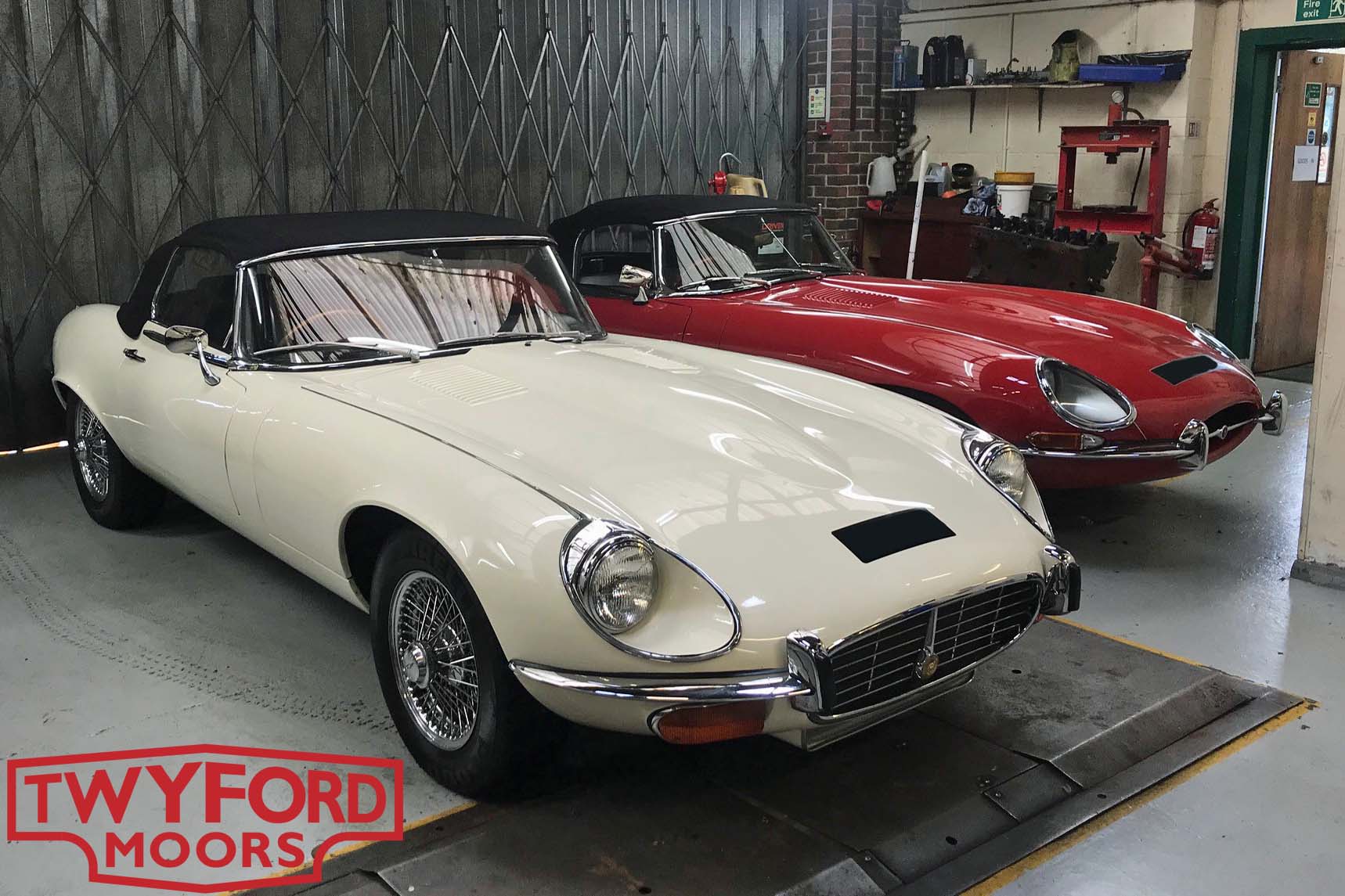 Getting down under with an XK150

This Jaguar XK150 OTS is being prepared to head to Australia. We have recently finished converting it from left to right hand drive ready for the owner to enjoy down under and now we are preparing it for shipping. As has been evidenced by many an immigration television programme on Dave or UKTV the Australians quite rightly take their biosecurity very seriously. In the light of the current pandemic this seems even more sensible than ever. As such when preparing a car to go to Australia, for permeant import or just for a tour, it is vital to follow the correct procedures and prepare the car appropriately.
We have a great deal of experience preparing cars for Australia having sold several cars to Australian customer and having had countless cars take part in tours in the Southern Hemisphere. As such we know the drill well. We have already had the appropriate tests and reports for asbestos prepared and pictured here the car is having a deep clean inside, outside, underneath and in every nook and cranny. 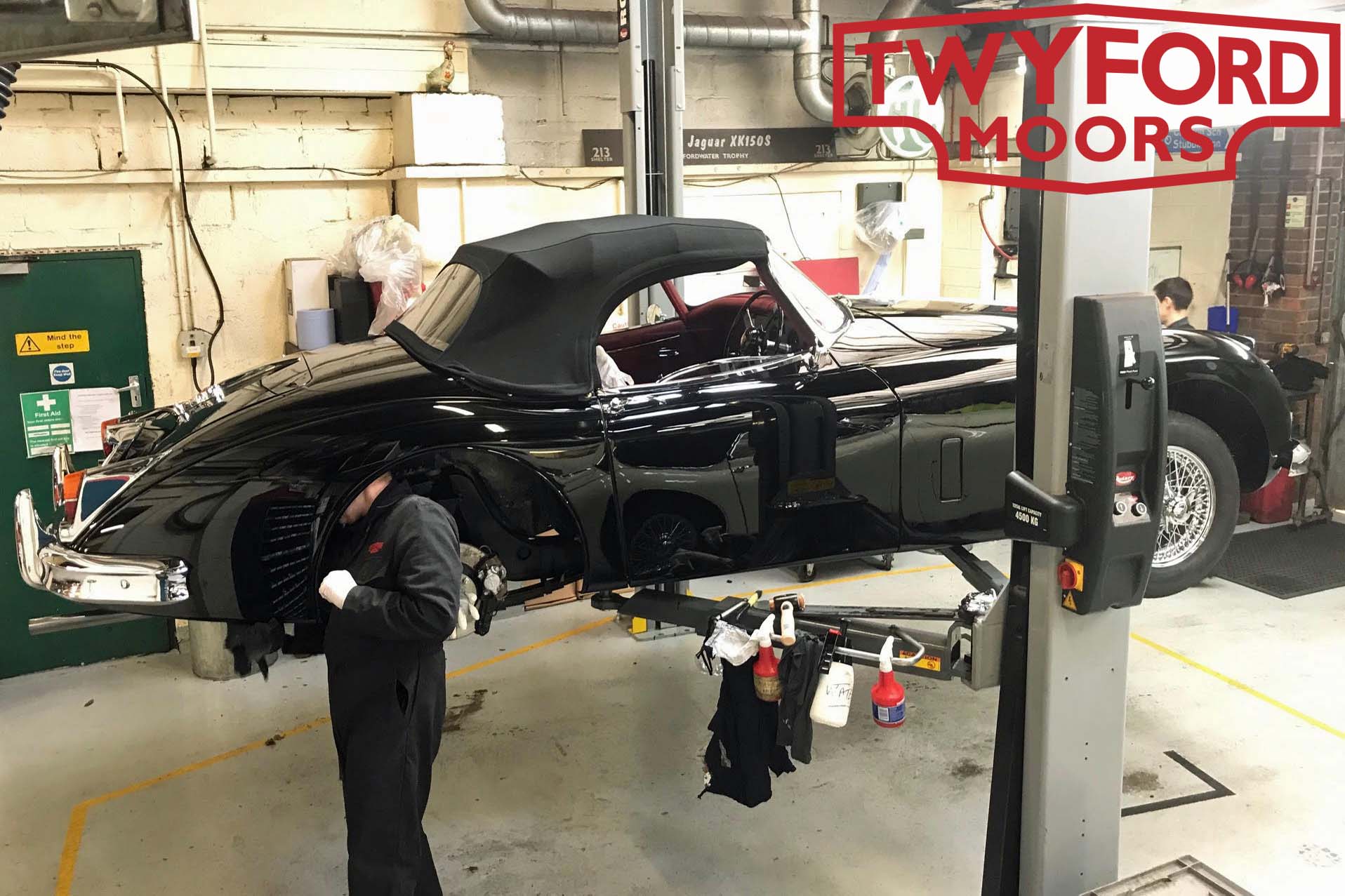