We are now fully back in the swing of things after the wonderful Goodwood Revival last month. Business in the workshop has marched on as ever with many cars still passing through for regular servicing and MOTs. We have even had a couple of cars in to be prepared for a tour which set off in the last week of September heading for Grease. We hope they have a wonderful time and that the cars perform well. For the most part, the season is starting to wrap up and our diary is starting to fill up with cars booked in for longer ‘winter jobs’. Please get in touch if you are looking to get some work completed and your classic car back in tip-top shape for the 2023 season. These autumn and winter months seem to pass all too quickly when you have so many lovely classic cars to upgrade and repair.
In this weeks’ update, we have a look at a couple of E-Types, XKs in for both servicing and restoration, a rather striking Mercedes-Benz and a Morgan Plus 4. 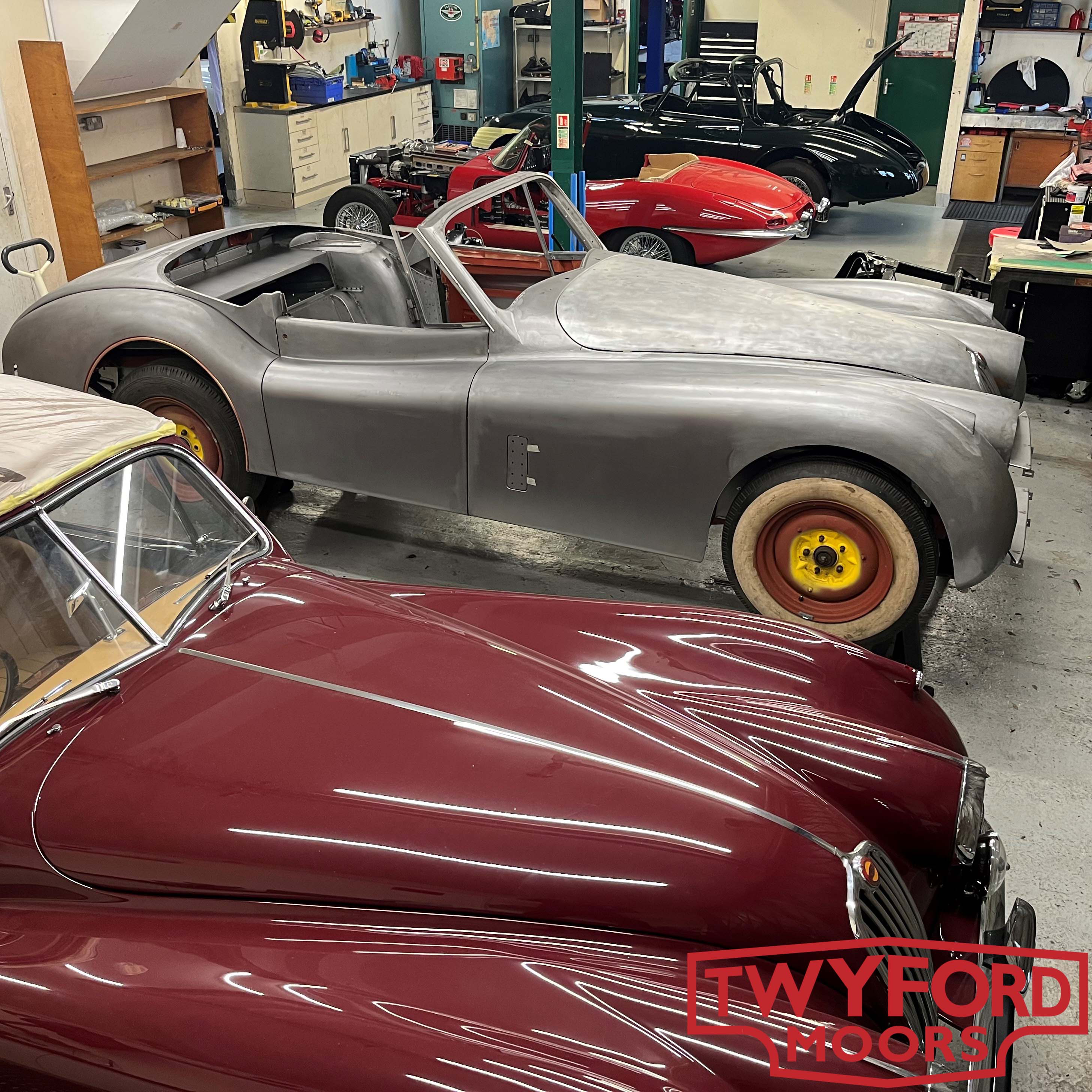 During and after the Goodwood Revival we often find ourselves helping our friends from abroad who have come over to attend the event. This year was no exception to the extent that we even collected an XK120 directly from the auction for an Australian gentleman to be inspected in our workshops (we will likely have a look at the XK120 in a future update).
This stunning Series 1 4.2-litre Jaguar E-Type made the journey over to West Sussex from Austria. Over the weekend at Goodwood, the owners had found their clutch was getting harder and harder to operate and increasingly they were grinding gears or having to pump the clutch pedal. The owner, having seen us at The Revival and seen our work, entrusted us to get his car back into working order ready for the drive home. The fault was quickly traced to a leaking slave cylinder. As Classic Jaguar specialists we keep an extensive range of parts in stock so had a clutch slave cylinder fitted and the system bled out in good time ready for the journey back to Austria. The owner also mentioned the car had been suffering with rattley brake pads after these had recently been changed. These were checked and refitted correctly and with that, we sent another happy visitor on their way. 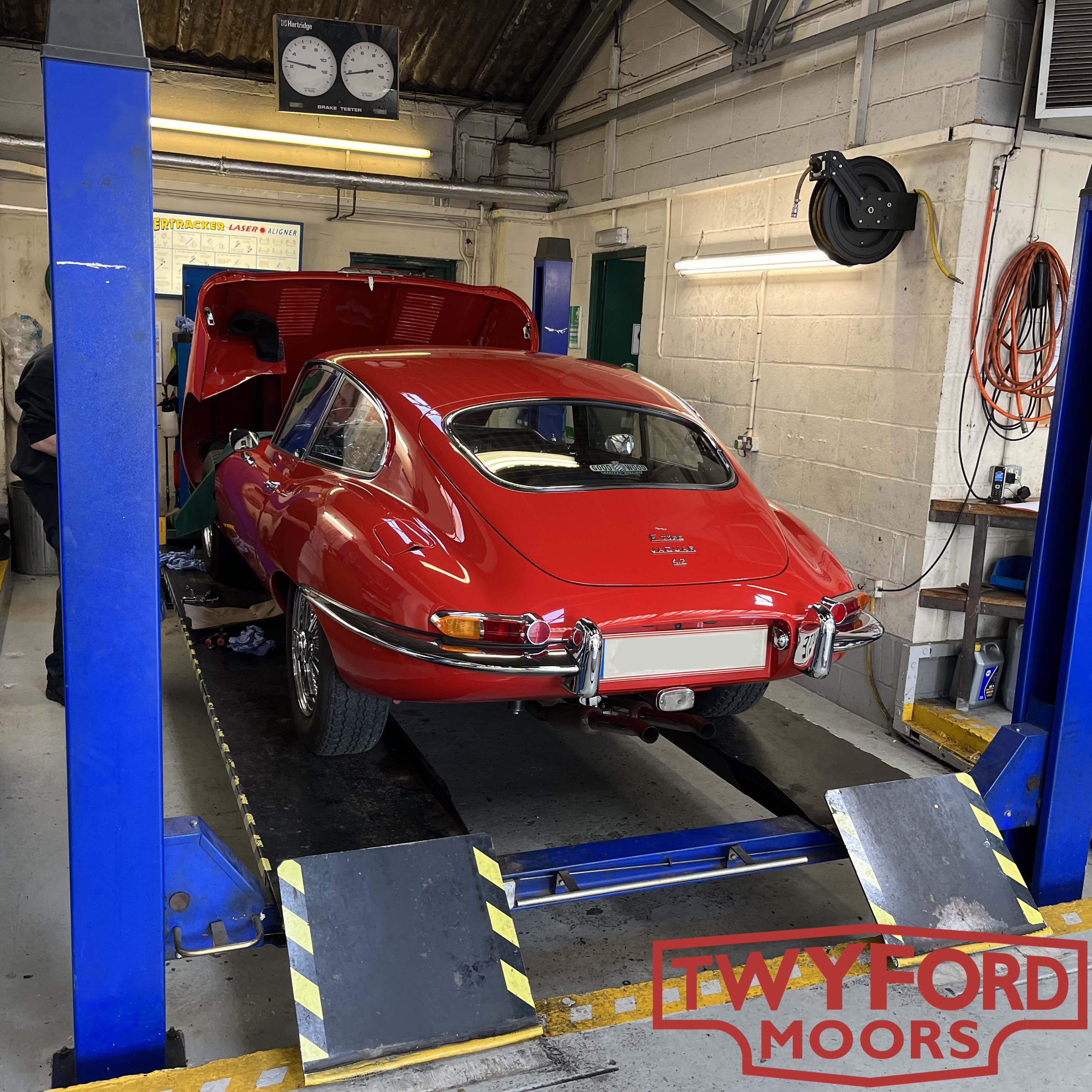 This charming XK120 roadster is a very early steel-bodied car. The first XK120s were constructed using aluminium over an ash frame however demand quickly exceeded what Jaguar had predicted and they had to rethink the production of these limited-run sportscars. In 1950 they shifted over to steel-bodied, though the bonnet, doors and boot lid remained aluminium; the change to steel bodies allowed them to speed up production and meet demand. These early steel cars are distinguishable from the later cars as they retained the separate chrome side lights and lacked both the heater and wing vents of the later cars. Interestingly this car actually had the space in the bulkhead for the heater but retained the early dashboard so as such never had the heater fitted. We suspect it must be one of the last cars before the changeover.
We have been caring for this XK120 for many years now and it is always a delight to see it in the workshop for its annual service and MOT. The car is used extensively for touring and general driving. It has a rather battle-scarred with great patina but is a solid and mechanically excellent car. It seems to be the cars which are used most that become the most reliable. This is likely a combination of regular use keeping everything in good order but also, initially, going through the process of troubleshooting issues the car may have. Please remember that storing your car properly and starting it over the winter period is essential. Please keep an eye on the website for our upcoming guide to winter storage. 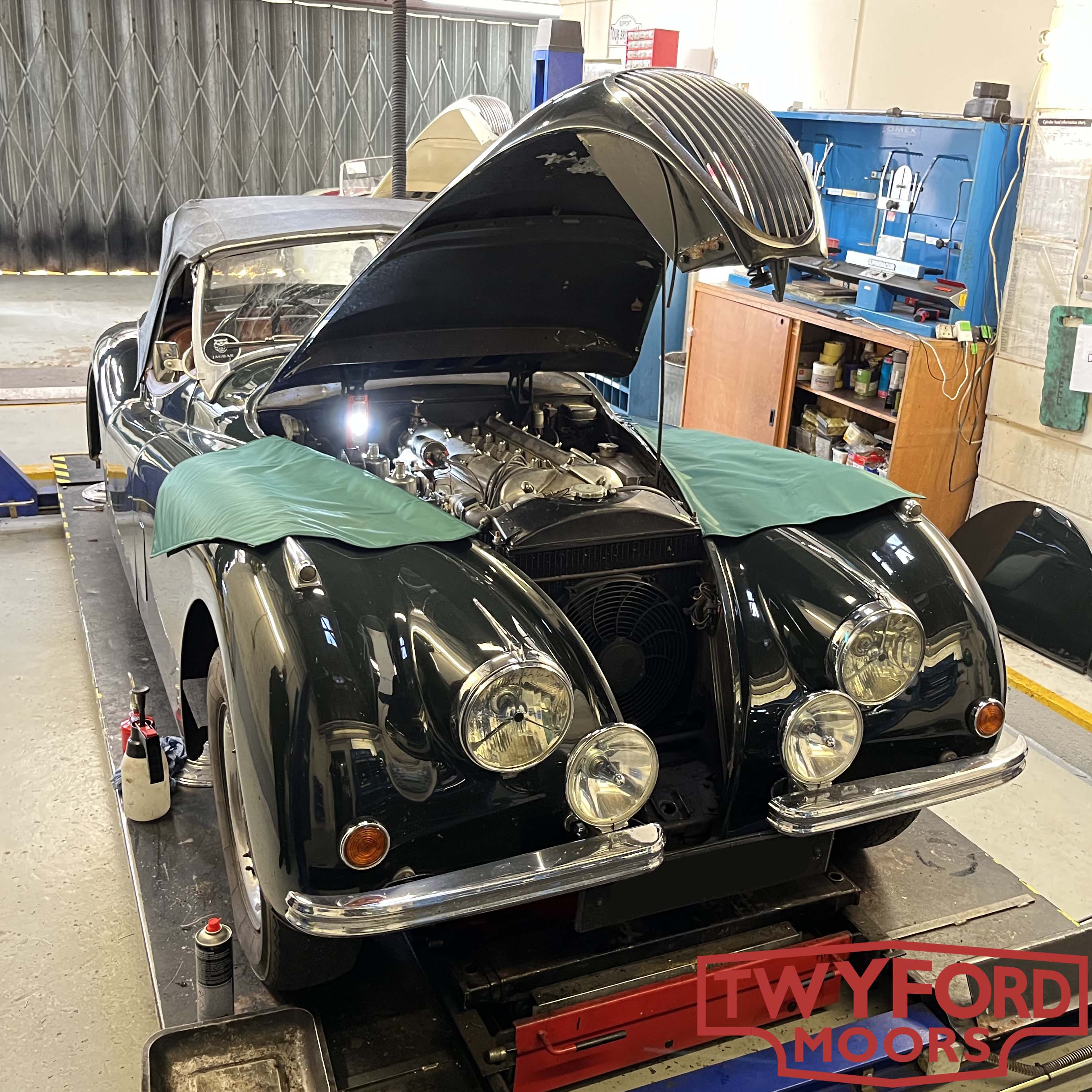 As many of you will know we cater for more than just Classic Jaguars and it is often a nice breath of fresh air to have something different pass through the workshop. Usually, we see British Classic Cars ranging from Aston Martins to Gordon-Keebles. It is less usual for us to get European cars in so this Mercedes-Benz drew rather a lot of attention when it arrived. The car belongs to a good customer of ours who owns a number of classic British cars including an XK150 S and an E-Type. When he started having issues with this 220S he had it trailered down to us for some tlc.
The car was suffering from a suspected fuel pump issue as no fuel was reaching the carburettor. These cars run an engine-driven mechanical fuel pump so a little different old SU electric fuel pump we are used to dealing with on Jaguars. Initial investigations found that the fuel pump was working but that it wasn’t able to draw any fuel up. Further work traced the issue to the fuel filter, which also operates as a changeover between the main fuel tank and the reserve tank. A blockage in here appears to be the issue. Parts have now been ordered in to rebuild the filter and we are hopeful we will have the car back on the road shortly. 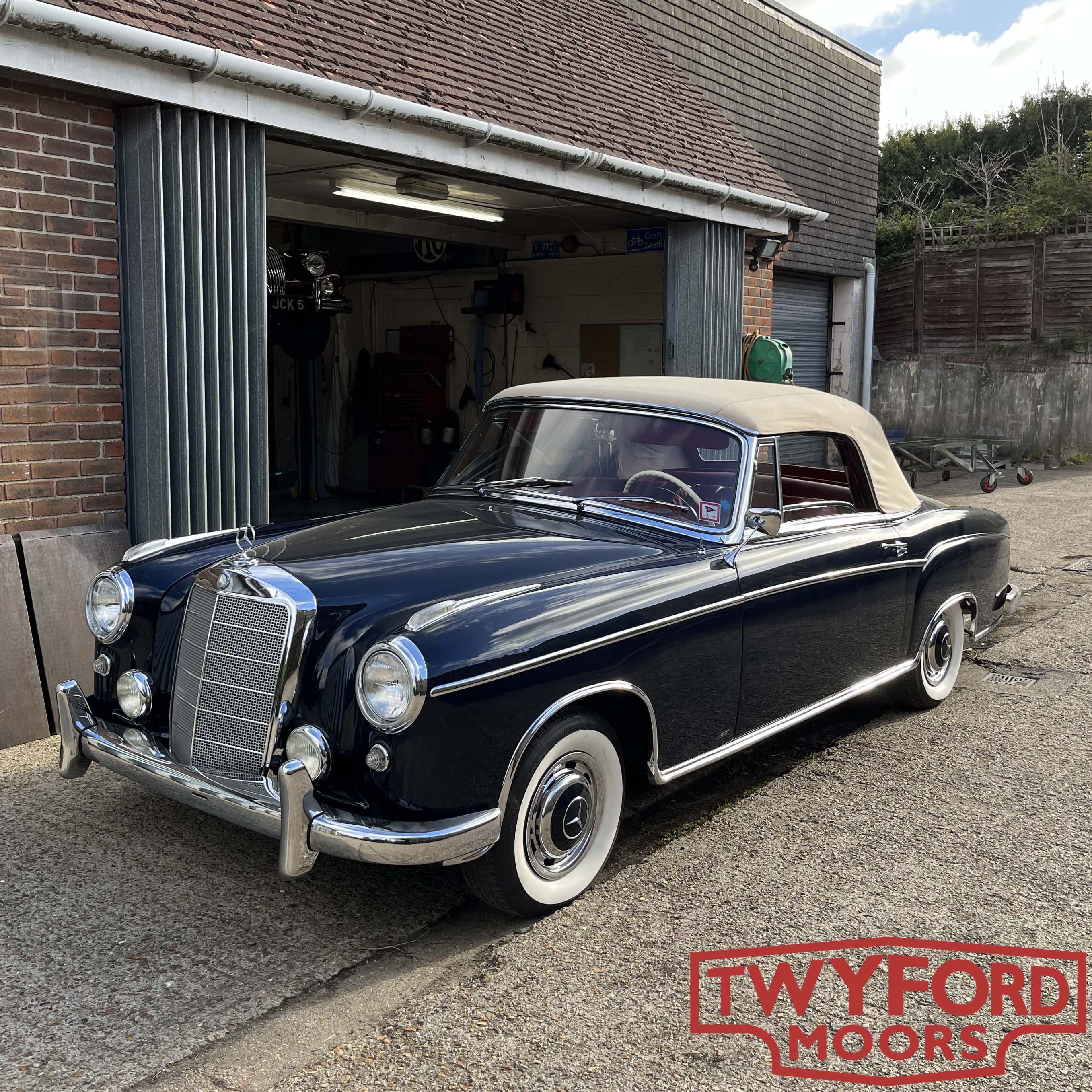 Pictured here is the 3.4-litre XK straight six removed from an XK150. We have just removed it from the car and it is in our engine rebuild room to be carefully dismantled, assessed and prepared for a rebuild. The car came into us with engine issues and was fully assessed with compression tests, leak down tests and our micro camera down the bores before reporting the results to the owner. We found the compressions to be very low and the engine to be generally very tired and worn so with the owner in full possession of the facts it was agreed that the engine should be removed and rebuilt.
We offer our in-house engine rebuilds to a range of specifications from completely standard to race spec’. Our most popular specification is our fast-road spec’ engine which, among other improvements, features fast road cams and larger valve gear. The focus of this engine is improved performance at lower revs and an increased but very flat torque curve. This delivers consistent power across the rev range and particularly at the lower end where you want it for road use. We carry out engine rebuilds for both our own restoration and also for those restoring cars at home so please get in touch if we can help with your home restoration. 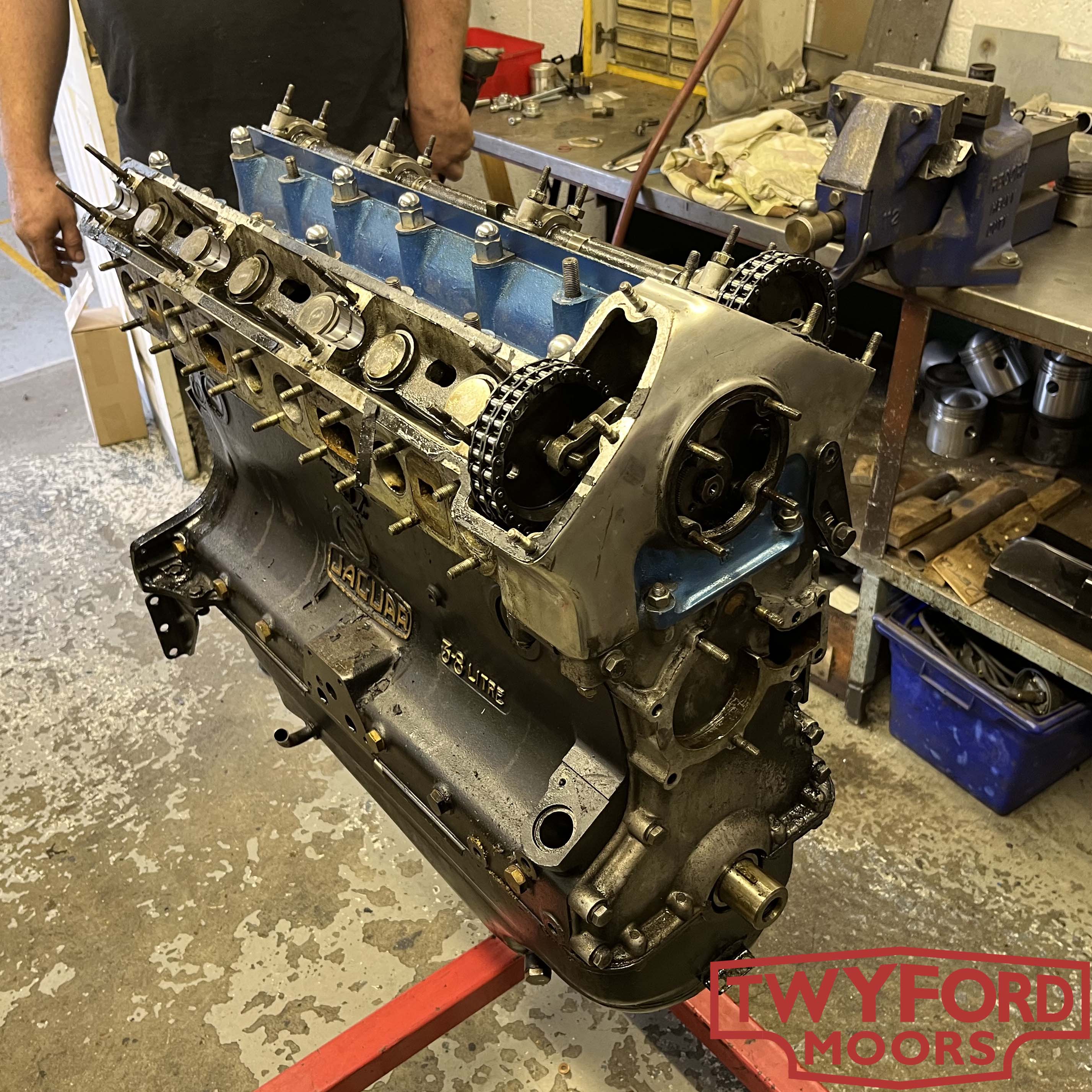 If you have followed our updates for some time, you might recognise this rather striking, Primrose Yellow, Series 1.5 E-Type. This car was with us last year for a partial restoration. The car had been stripped and painted elsewhere and then the project ran into problems. After five years off the road, the car arrived with us with a brief of getting it back on the road on a measured budget. We think the finished car has come together rather well and now after a few hundred shakedown miles the car is back with us to have a pre-tour check-over and to have some improvements, upgrades and adjustments made.
The main task on this occasion was to give the car a thorough check though and nut and bolt check. This ensures that anything that has settled since the car was completed is adjusted and tightened up. The ride height was checked and the exhaust adjusted up as the owner had found it occasionally touched speed bumps. This is a common issue with E-Types and although we have done our best to improve this, care will still need to be taken. We also fitted a rally trip computer running off wheel sensors for the tour they are about to embark on. 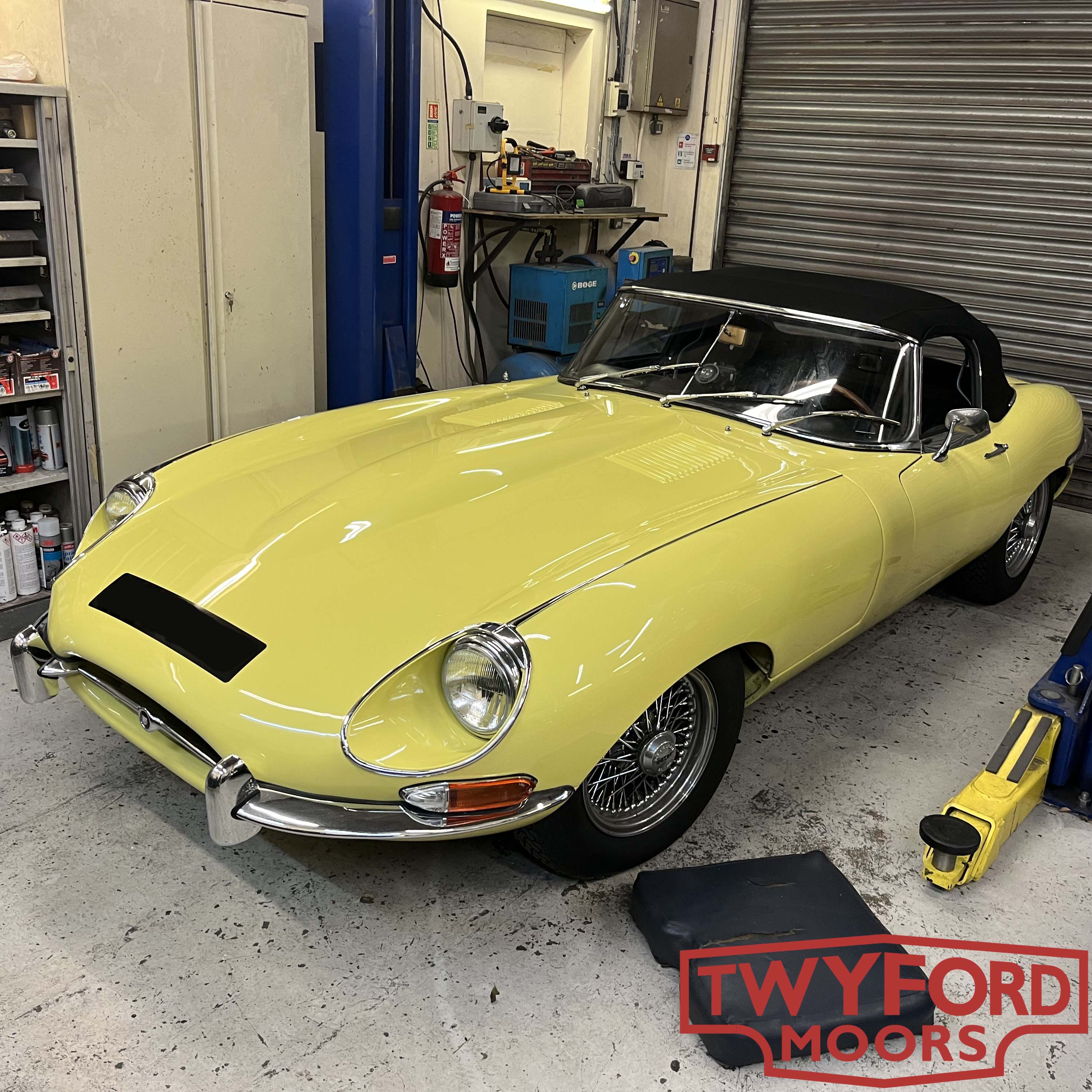 We have looked at this stunning XK140 drophead coupe at various points during its full nut and bolt restoration. We are reaching the end of this project and cannot wait to hand the car over to its owners. There are still many small detailed jobs to do before the car is ready to go. With the trimming completed the next step is to fit the hood chromes. These have already been trial fitted and shaped in bare brass to ensure a perfect fit before being sent off the be chromes. We do this delicate work first as if they have to be bent after chroming the chrome can crack. It is vital that the shape of these chromes is just right otherwise it really lets down the finish of the car. With the chromes back and looking stunning the careful work of finally fitting them without damaging the hood can take place. Great care also has to be taken not to damage the hood or the paintwork. This is even more imperative on this car as it has a Sand coloured hood which tends to show any marks. 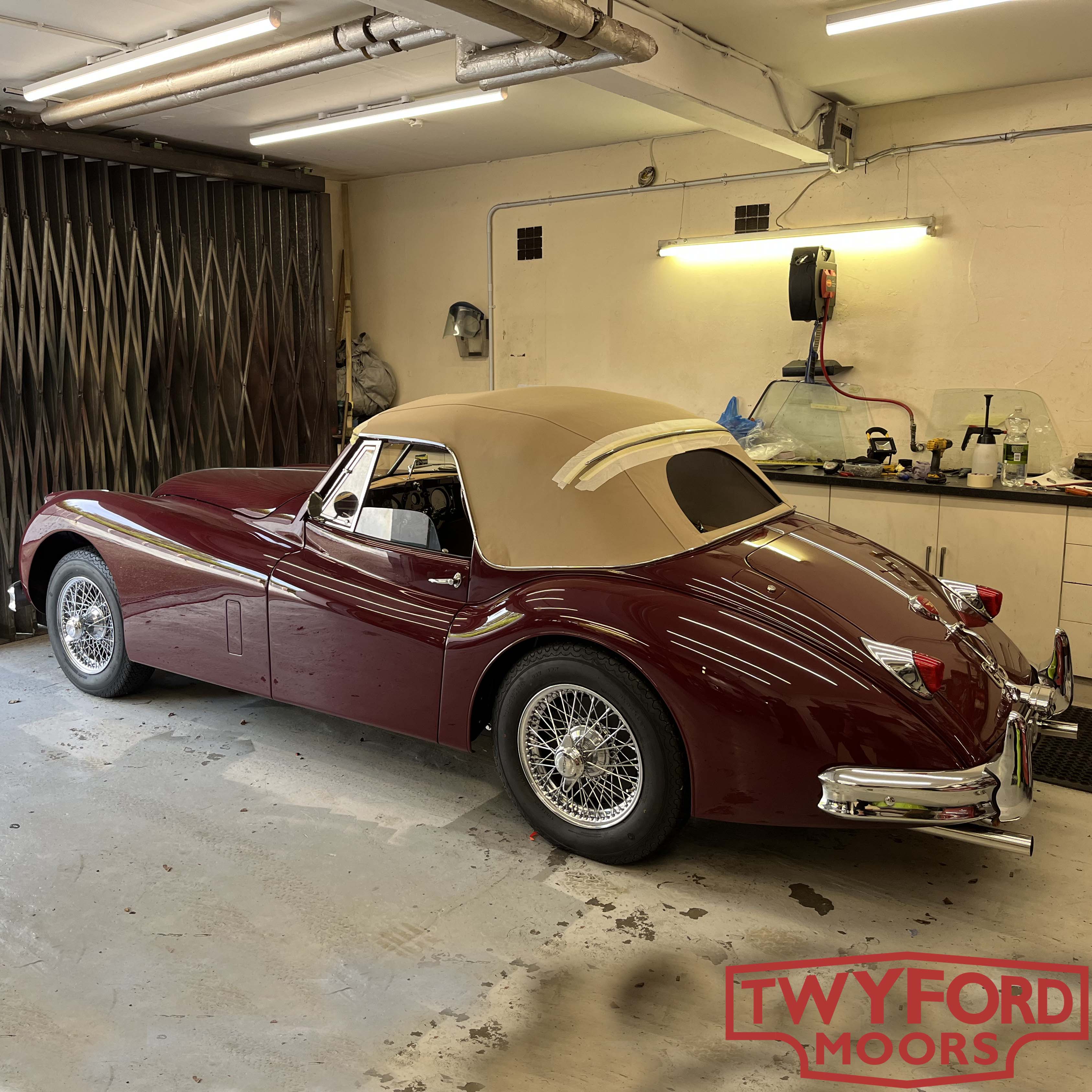 This Morgan Plus Four is another of our regular visitors belonging to a local chap who has owned the car from new. We have been looking after the car for the best part of 15 years and have got to know it very well. It is a mid-1990’s Plus Four and as such features the much-maligned Rover K-Series engine. In practice, we have seen no issues with the unit fitted in this car though we understand the 2-litre version fitted in this car was more reliable than the smaller 1.6-litre unit. Combined with the five-speed gearbox this car is absolutely fabulous to drive delivering swift, if not mind-blowing, performance through a chassis that gives a real feeling of connection to the road. These Morgans have become almost timeless in their unchanging consistency through the decades. It is always a pleasure to see this one come in year after year and knowing that it brings its owner so much enjoyment.

If you have seen us at a classic car show over the last few years you will most likely have seen the chassis of this XK150 3.8 S restoration. The car is a very rare original UK, right-hand drive drophead couple and as such is one of fewer than 50 such examples built. There is some debate as to the exact production figures but it is believed that it could have been as few as 19 cars were built in this specification. The car was found beautifully preserved, though slightly rotten, some years ago and we started the process of restoring it as a demonstrator. We had such interest in the car as a rolling chassis, and so much other work to be going on with, that it has remained as a chassis for many years now and has been used at countless shows.
Finally, after so many years the time has come to reunite the chassis with its now beautifully painted body. The car is finished in its original British Racing Green and in all other respects, we are keeping the car as original as possible. Lowering the body over the fully built-up chassis with the engine and gearbox installed is our preferred method of fitting. This minimises the risk of damaging the bodywork at a later stage. We bring you more updates as we progress with this project. 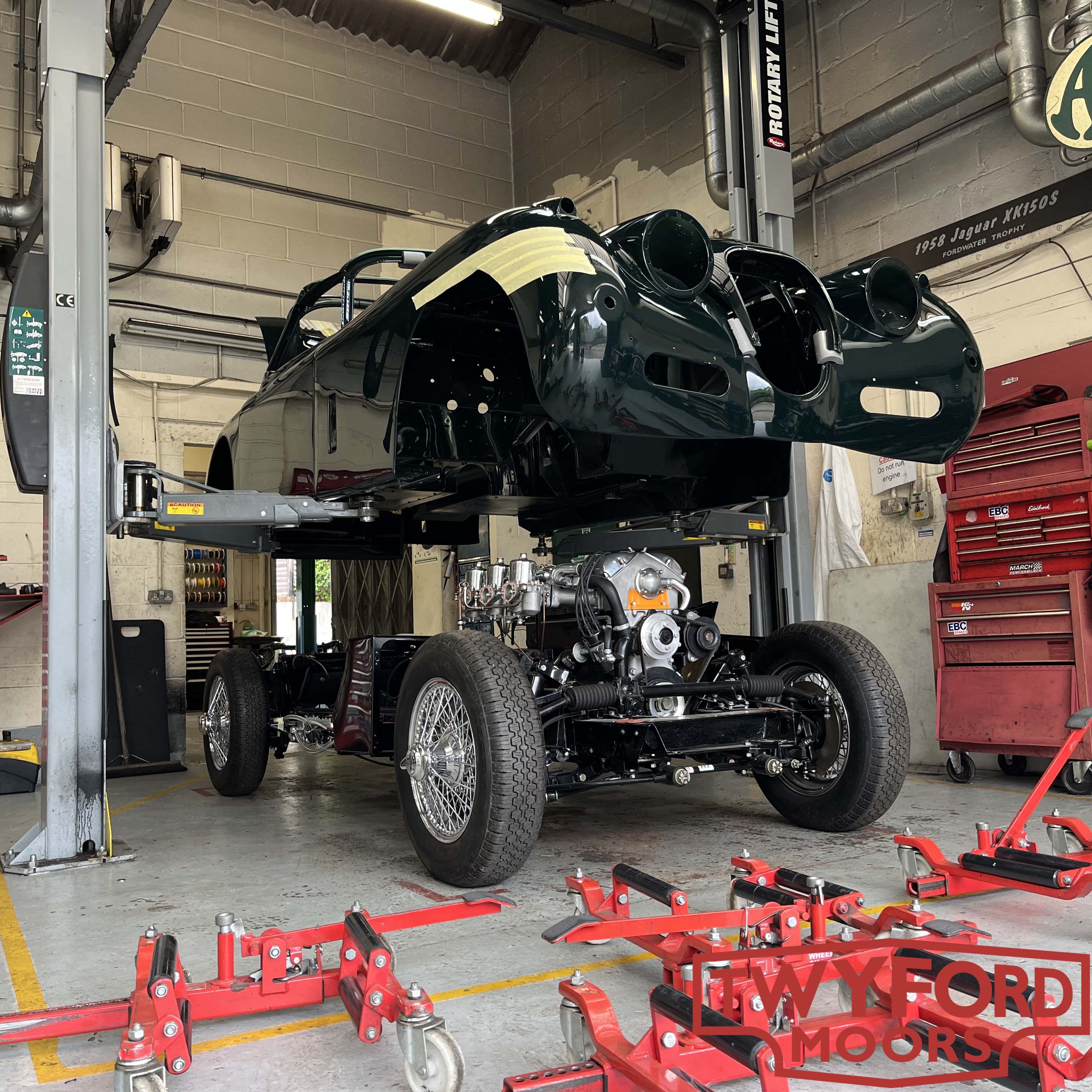