Another busy and varied week has passed here in Hampshire. The workshop is busy with plenty of servicing work coming and going. Restorations at all stages progress, from the E-Type we are stripping down to an XK140 DHC which is being road tested and everything in between. Better yet with the fine weather we have been having there is no need to dodge the rain to get out on test drives.
In this weeks' update we check in on progress with our series 1 E-Type restoration, see some XKs in for servicing and look back at a vintage aerial photo of our workshop. 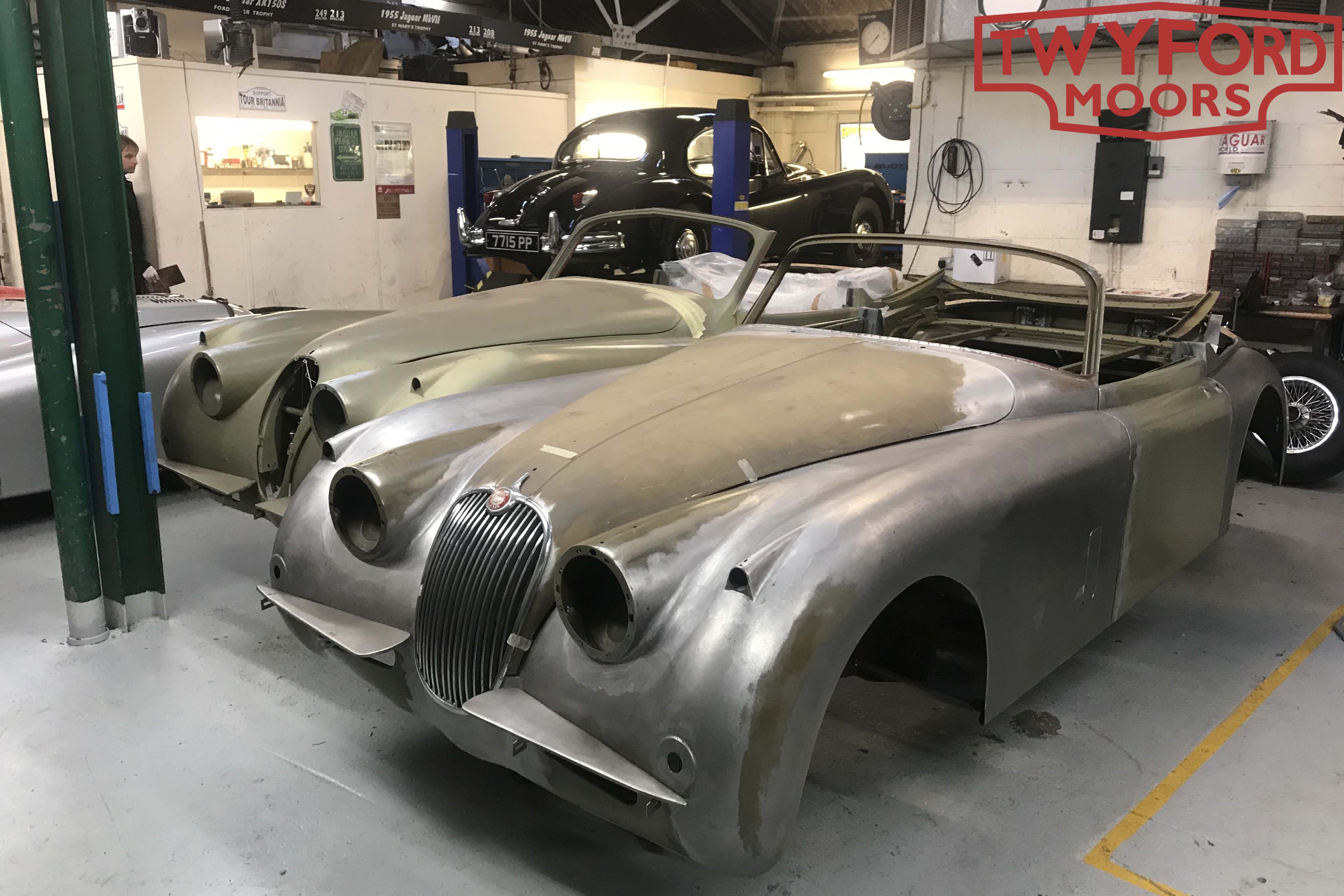 We're cracking on well with our Series 1 Jaguar E-Type restoration. The car is completely stripped down to the tub and welding work has begun. Fortunately, the body is in remarkable condition so only a few repairs are necessary. Much attention is being given to the all-important shut lines which, in our opinion, make or break a restoration.
Meanwhile we can start assessing and reconditioning the rest of the car's components when they have been removed from the car. The engine is in with our engine builder to be stripped down. The rear subframe is in line to be rebuilt and our electrician is starting work on the gauges and switches.
We hope to have this lovely car on display at E-Type 60 on the 12th and 13th of June, though most likely not quite finished. If you have not yet booked your ticket please visit the E-Type 60 website and check out all the wonderful activities they have planned. 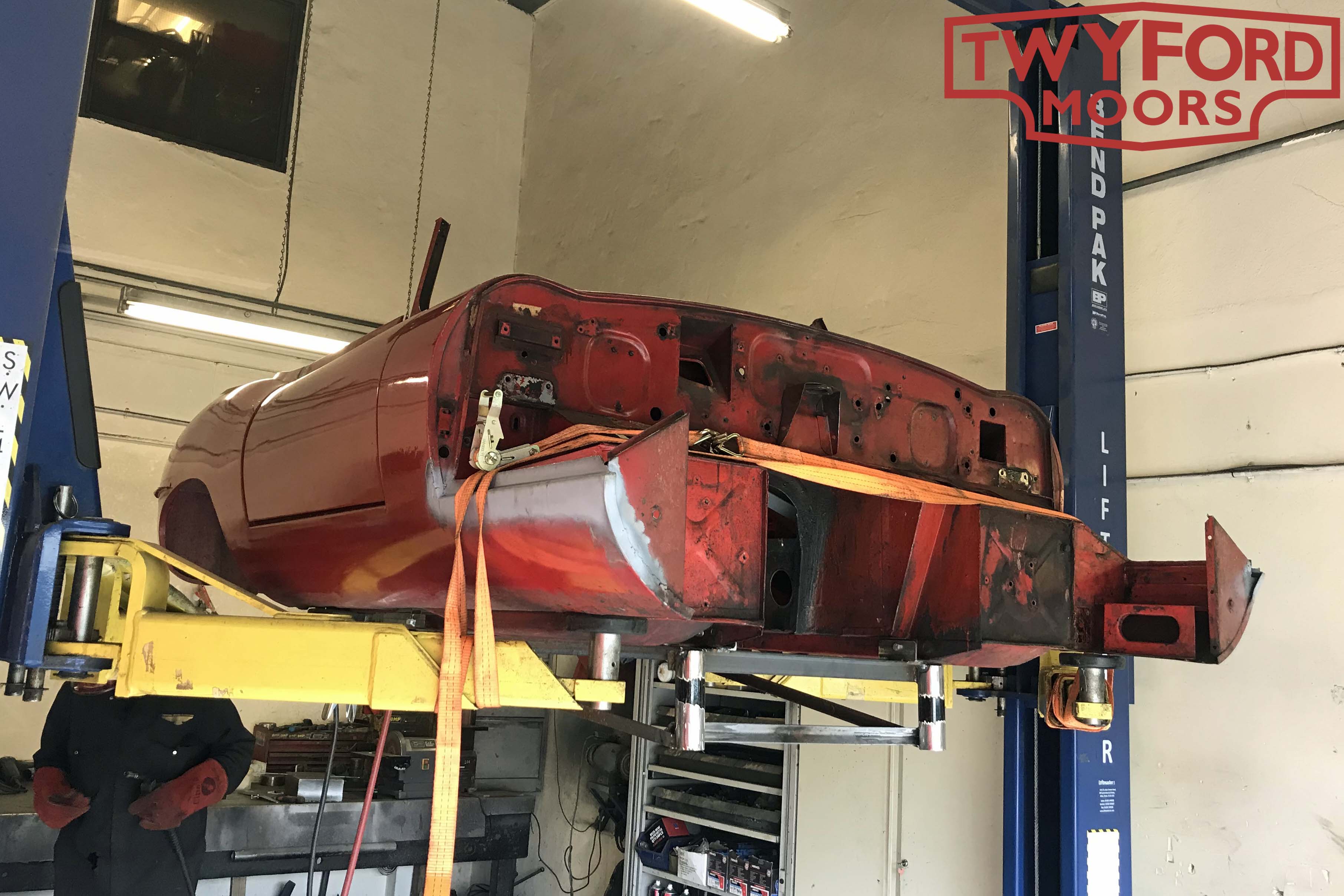 We are delighted to have this wonderful Jaguar XK150 SE drophead coupe in for sale. The car underwent a full nut and bolt restoration in the 1990s which was finished in 1998. It then came into us in 2004 to be sold and has been with one of our customers ever since. The car has taken part in many events and tours with the XK Club over the years and is very well known on the XK scene. It has come back to us every year to be serviced over the past 17 years and is in excellent condition though out. The car has been extensively upgraded for touring and features a triple carburettor fast road specification engine. A real driver's car!
We are looking forward to being able to welcome customers back to the showroom when we reach the next stage of the Governments 'road map' (which seems to us to be more of a time table than a road map) on the 12th of April. Until then if you would like more information about cars we have for sale please get in touch and we would be delighted to help in any way we can. 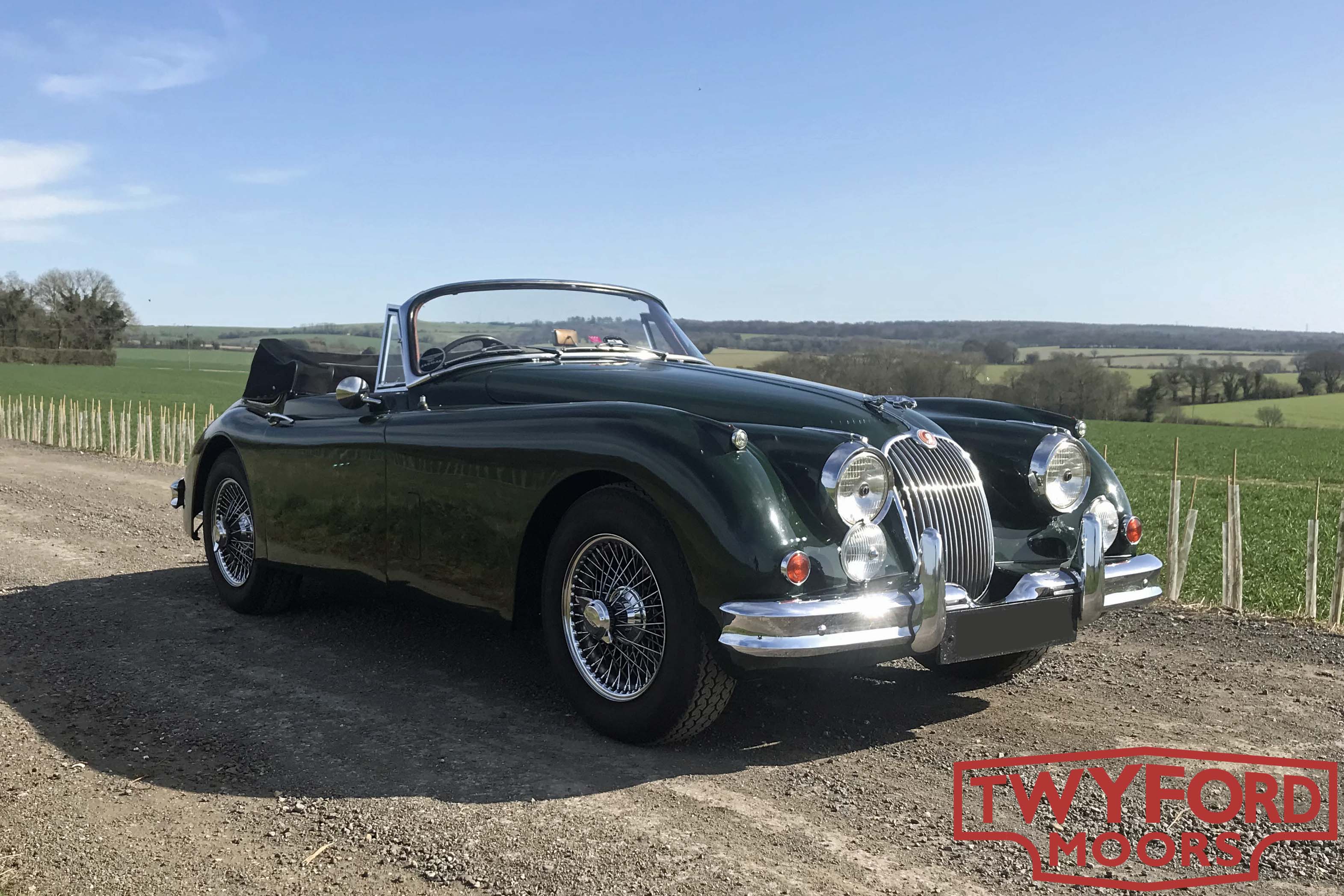 This lovely Jaguar XK120 is in for its annual service and MOT. The car is an original UK right-hand drive car making it very rare indeed. It has been extensively upgraded and is currently running a 4.2 litre engine and five-speed gearbox, although the owner has retained the original engine and gearbox should he wish to refit these at a later date.
Back in 2009 this XK featured in one of Top Gears famous challenges. It took part in a race between a Black Shadow motorbike, a steam train and the XK120. Jeremy Clarkson wanted to drive the car but found he could not fit into the XK120 so instead acted as fireman steam train. James May got the honour of driving the XK120 on what was tilted 'the race to the North' from London to Edinburgh. The XK went on the win the race and must certainly have been the most comfortable of the three ways to travel. The steam train came in a close second arriving just 10 minutes after the XK and the motorcycle suffered a breakdown coming in last. 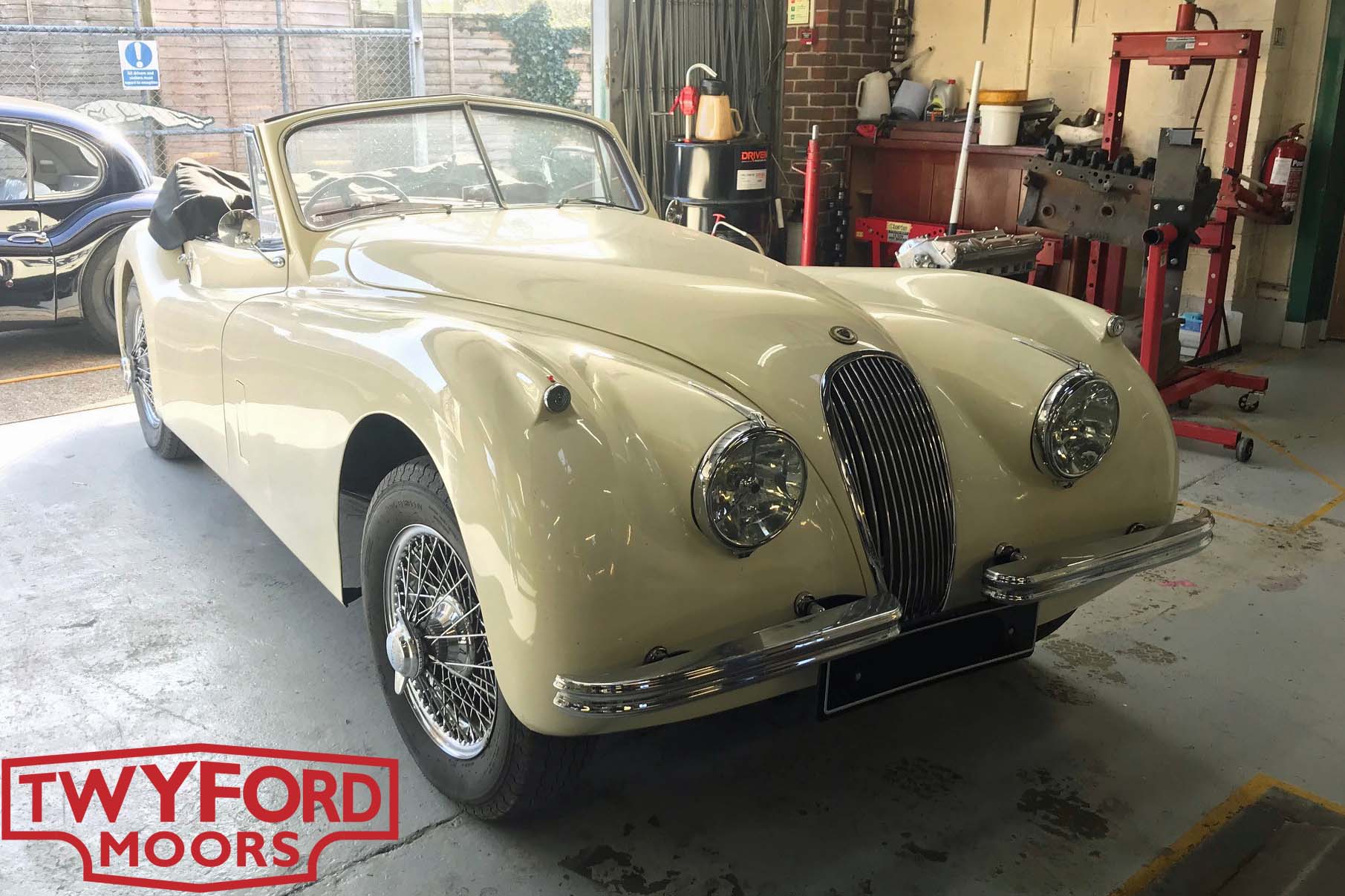 This series 3 Jaguar E-Type is new to us and it must be one of the finest V12 E-Types we have ever had the pleasure of working on.
Amongst a few 'niggling' issues the customer brought the car in for was a blocked boot drain hole on the near side of the car. Various people had 'had a go' at resolving the problem without success. We investigated the issue and found that the drain was blocked almost all the way down where there is a metal 'Y' union joining the boot drain and the fuel filler drain. Whatever was bocking it was not going to be shifted with water, rods or compressed air so there was no choice but to get to the union. This 'Y' union, along with the hose from the boot to the union, is located behind the fuel tank which probably explains why previous attempts to rectify the problem had been abandoned. Here at Twyford Moors we think if a job is worth doing it is worth doing properly so, with the customers consent, we removed the fuel tank and cleared the blockage. It turned out the be the rather rotten bolt pictured here which must have been down there for quite some years. 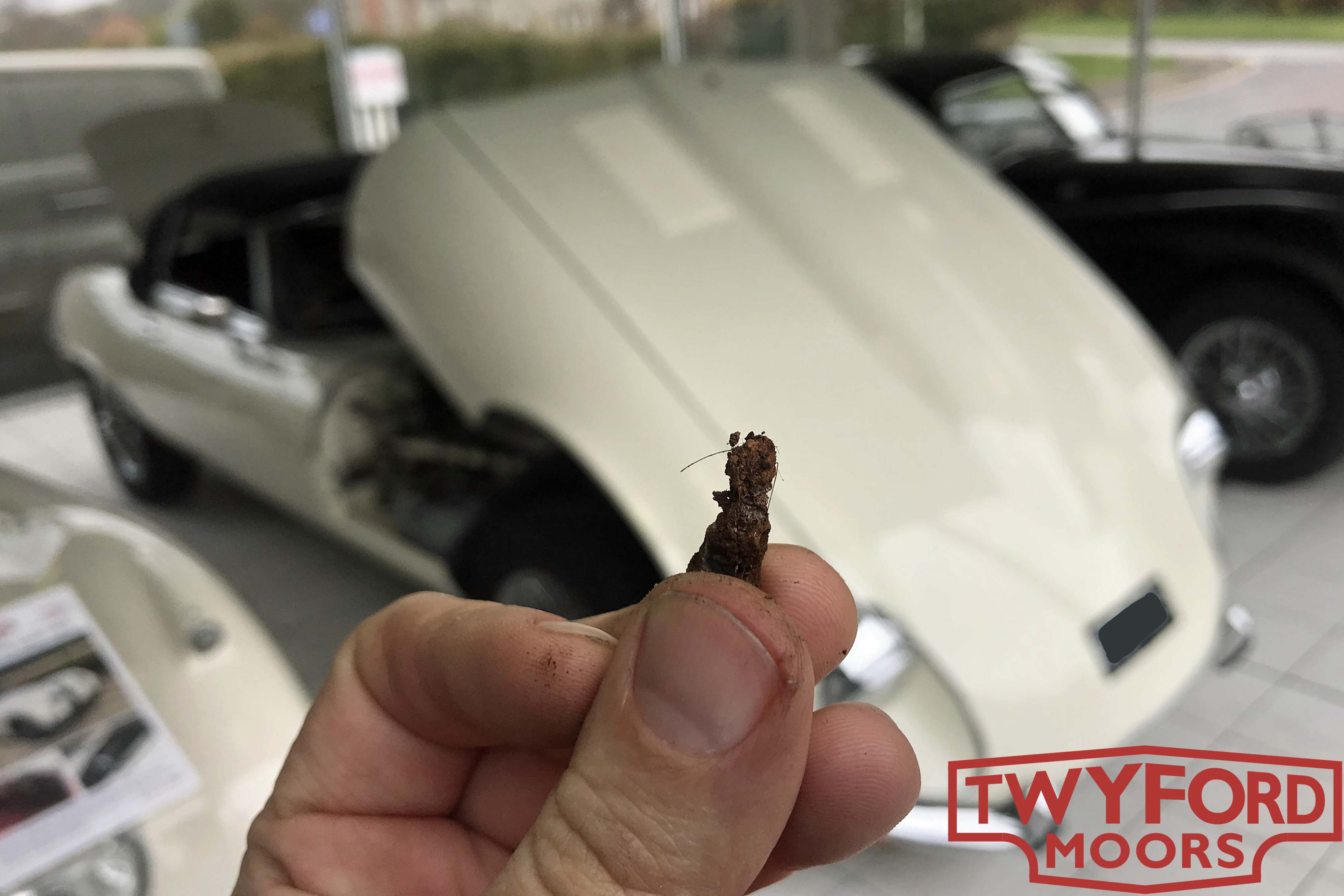 Aerial photo of the workshop

Continuing our series of vintage photos of the workshop here is a great shot we came by a few years ago. It is of our workshop and the surroundings from the air and was taken in 1964. There are more cars in the photo than we are going to list here but there seems to be a wonderful array of motors from Minis to Morris Minors and Rolls-Royces to Jaguars. If anyone fancies coming up with a comprehensive list of all the cars, please feel free to share it with us. A bonus point if you can identify the small boat!
As we have mentioned before, the main workshop pictured here is still our main servicing and maintenance workshop today. The building has since been extended in all directions with our showroom to the front, restoration workshop to the left as you look at the picture and our body workshop to the rear. 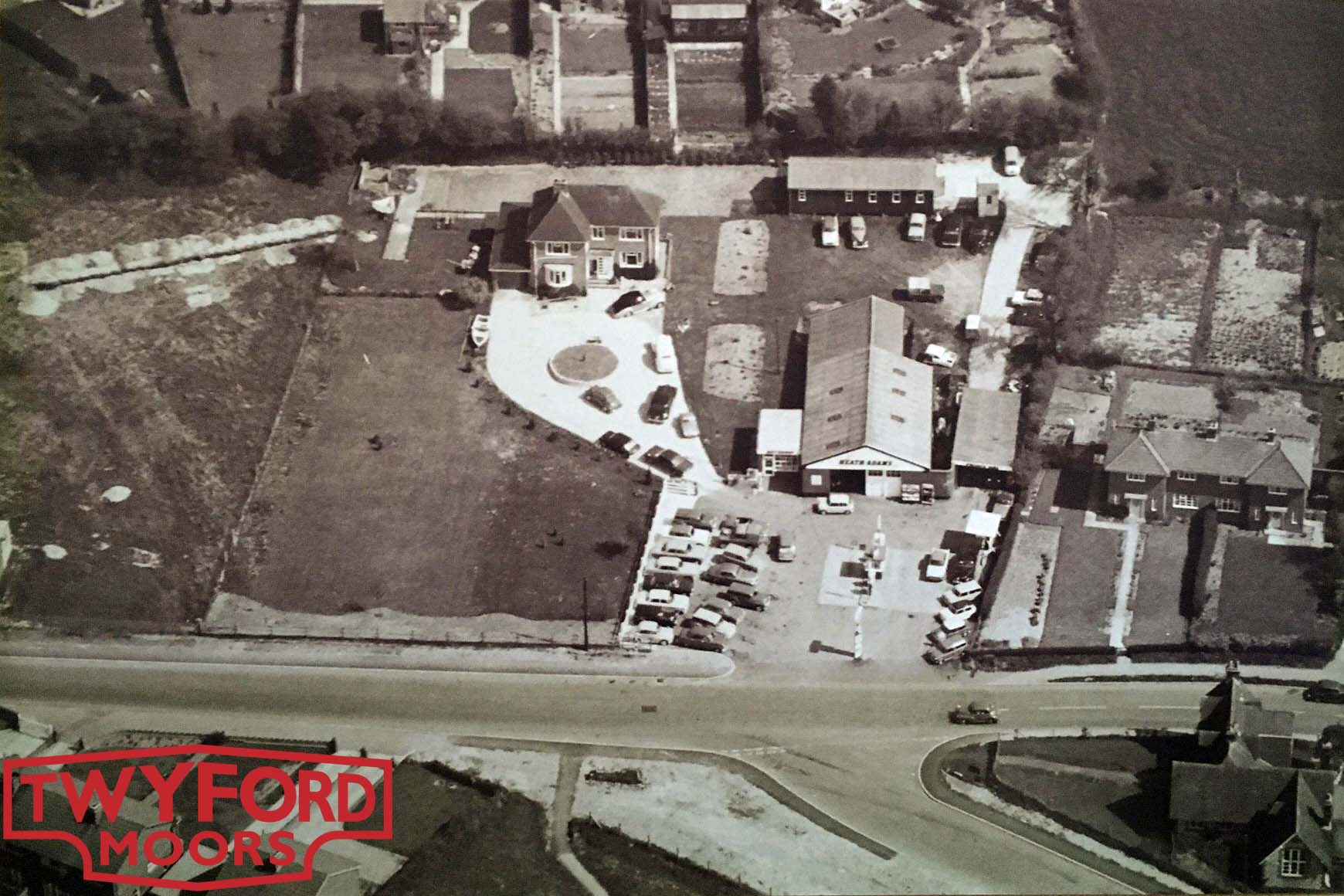 This XK140 drophead coupe is another one of our annual visitors. We have got to know her quite well over the years. It was bought for the owner as a gift from her husband as she had always loved XKs. She found that the clutch was too heavy, so the car has since been converted to automatic with a modern auto gearbox fitted. This is a lovely conversion if you are that way inclined and makes the XK into a very relaxed cruiser to drive.
This year the customer asked us to investigate some knocks and creaks on the front end. We found that the front suspension bushes were worn. We advised that the suspension be rebuilt using modern bushes and the owner gave us the go ahead. All the suspension has been powder coated and new polyurethane bushes have been fitted throughout. This really does make such a difference to both the ride and handling of an XK. 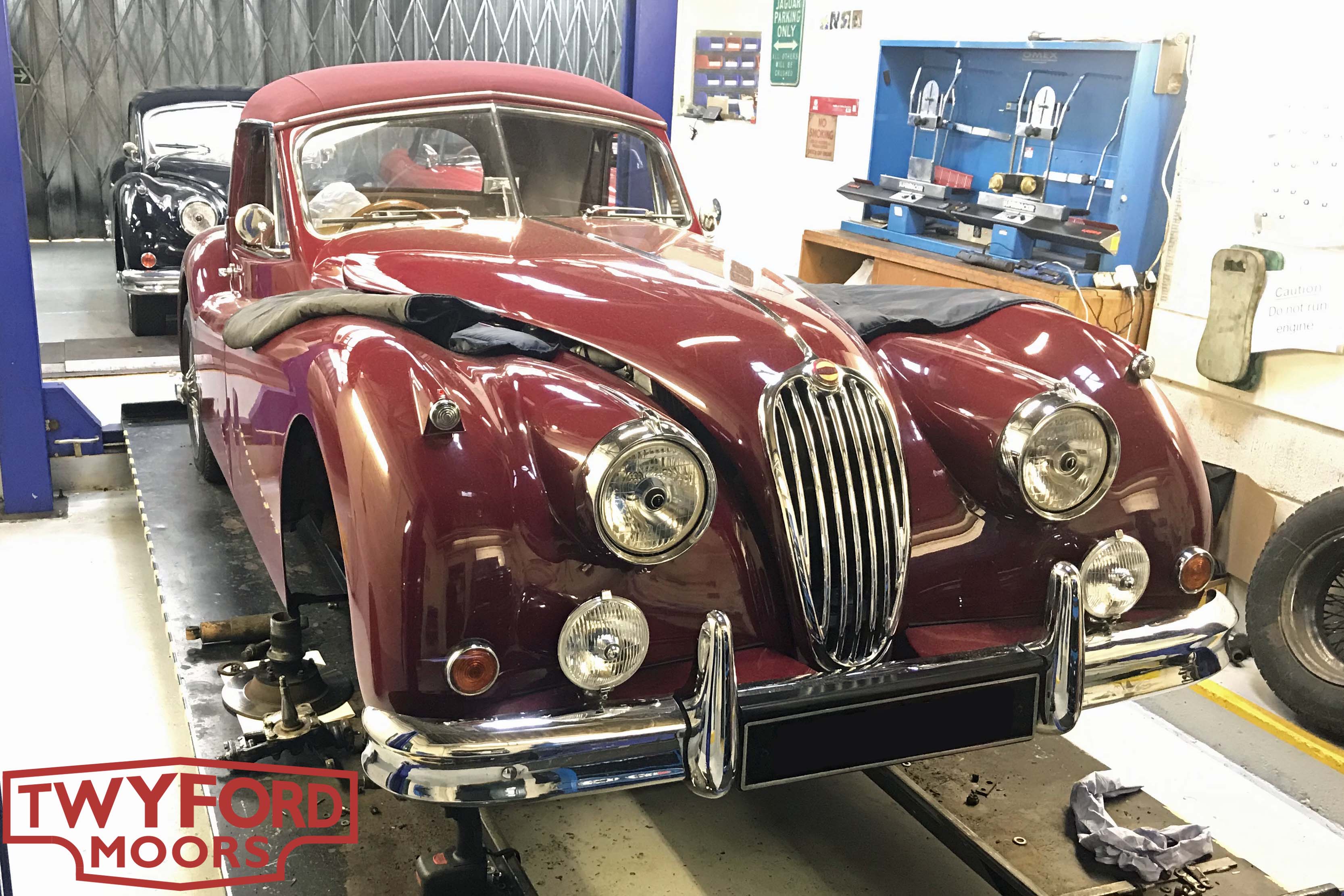