LVC 345 was produced in February 1952 as a left-hand drive XK120 fixed-head coupe. The car was first loaned to Sir Stirling Moss by Sir William Lyons in 1952 when he was racing for the Jaguar team. The car was used by Moss to travel between race events in Europe. Wonderfully, the car still retains its original buff logbook with Moss's signature as first and second owners. The car has a unique two-tone green and cream paint scheme chosen by Moss himself and the car has a colourful and varied history which has been embraced by its new owner.

In the early 1950s, LVC was seen being driven by Moss all over Europe, on and off of airliners and even towing his caravan as evidenced by the many charming photographs still in circulation.

One particularly notable and famous occasion was when Moss was using the XK120 to tow the caravan with his manager Ken Gregory driving. They were travelling to Luxembourg for a Formula 3 race. Amongst the luggage in the caravan were ten dozen eggs presented to them as a gift from one of the mechanic's mothers. The caravan somehow broke loose, overtook the XK120, hit a kilometre stone, bounced up in the air and overturned. The pair turned the car around and were greeted by the sight of Moss' pyjamas hanging out of the broken skylight covered in broken eggs. All Moss and Gregory could do was sit at the side of the road overcome with laughter.

Although the car was initially loaned to Moss it became his personal car a year later as shown in the logbook. Primarily LVC was intended to be used as transport between events but it was also used for rallying and racing. The picture here shows the car competing in the 1952 Daily Express rally wearing number 216 with Moss driving and John Cooper in the passenger seat.

In 1954 Moss was signed to Mercedes so the Jaguar had to go. LVC was purchased by Raymond Playford who then went on to found the Jaguar Drivers' Club. Playford went on to rally and show the car extensively. As such, LVC could be considered the founding car of the Jaguar Drivers' Club. The car was pictured at a Jaguar Drivers' Club event in 1959 being driven by club-founder Playford wearing the number plate RP9. Mr Playford rallied and showed the car for almost a decade during which time he converted it to right-hand drive and fitted XK150 disc brakes. The car was then sold to a Mr John Turner of Norwich in 1963 and registered VCF950 (as RP9 had been removed). From there, the car stayed in the Norfolk area and changed hands again later in 1963 to a Mr Anthony Brett and then onto a Mr Edward Allison. Mr Allison part exchanged an Austin-Healey Sprite for the XK120 with cash his way 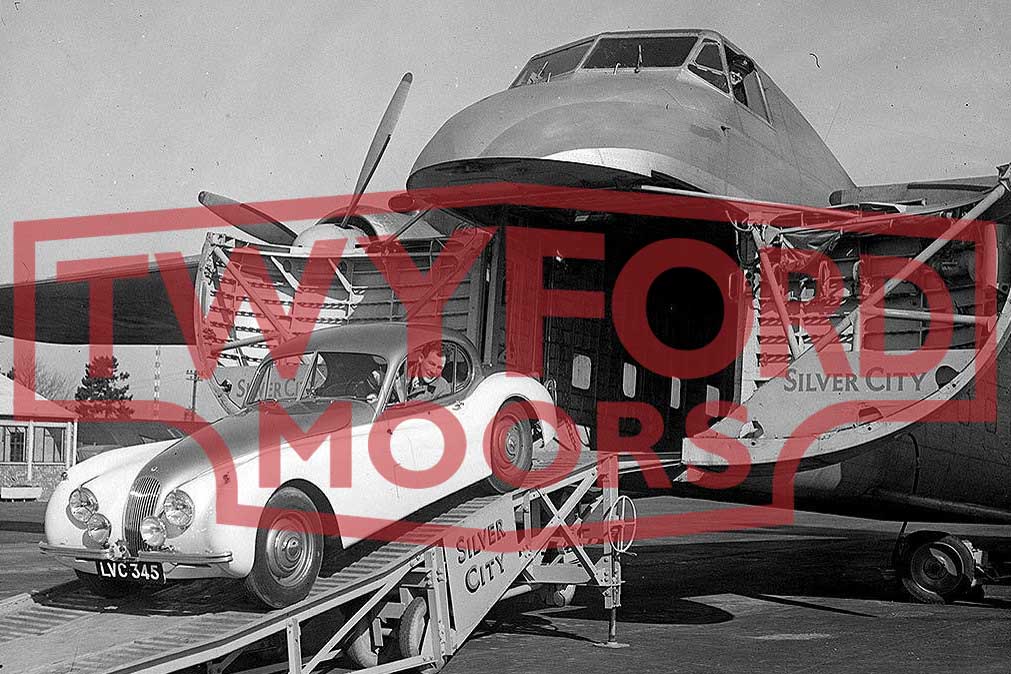 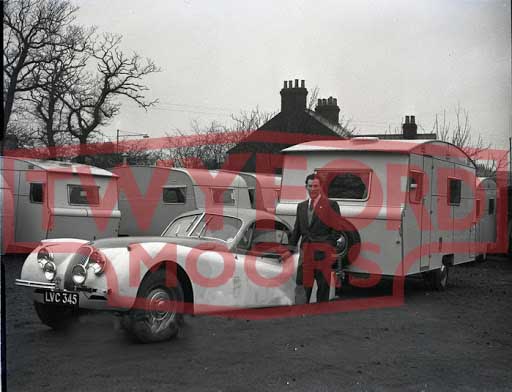 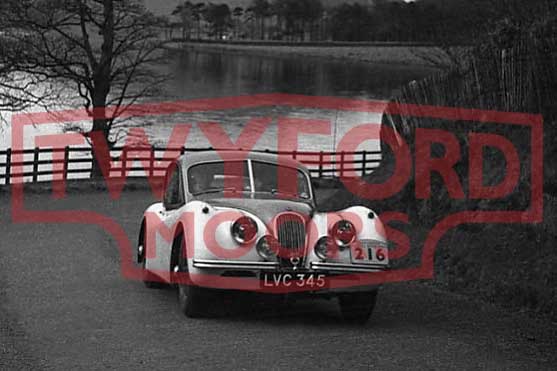 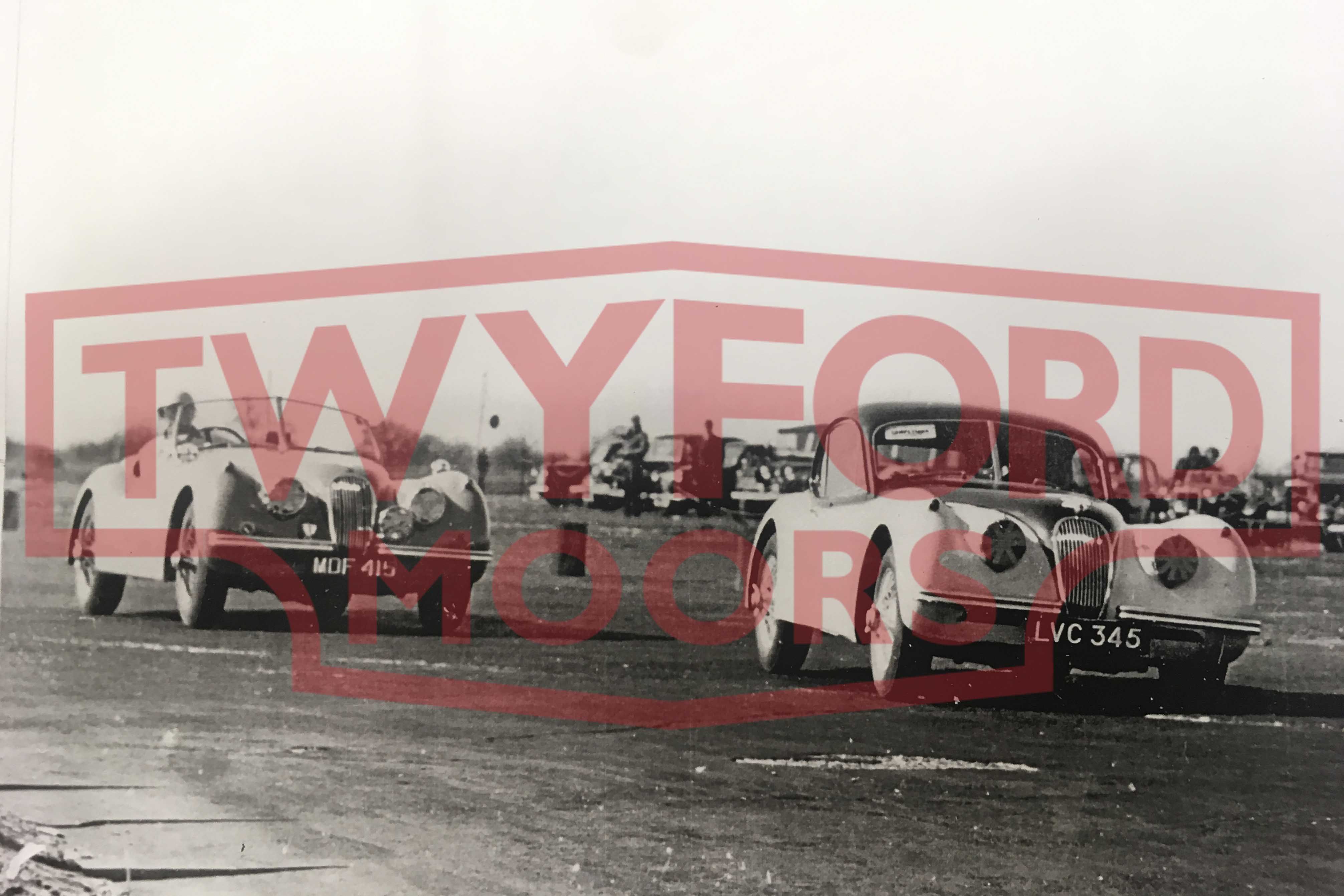 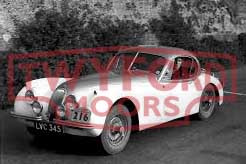 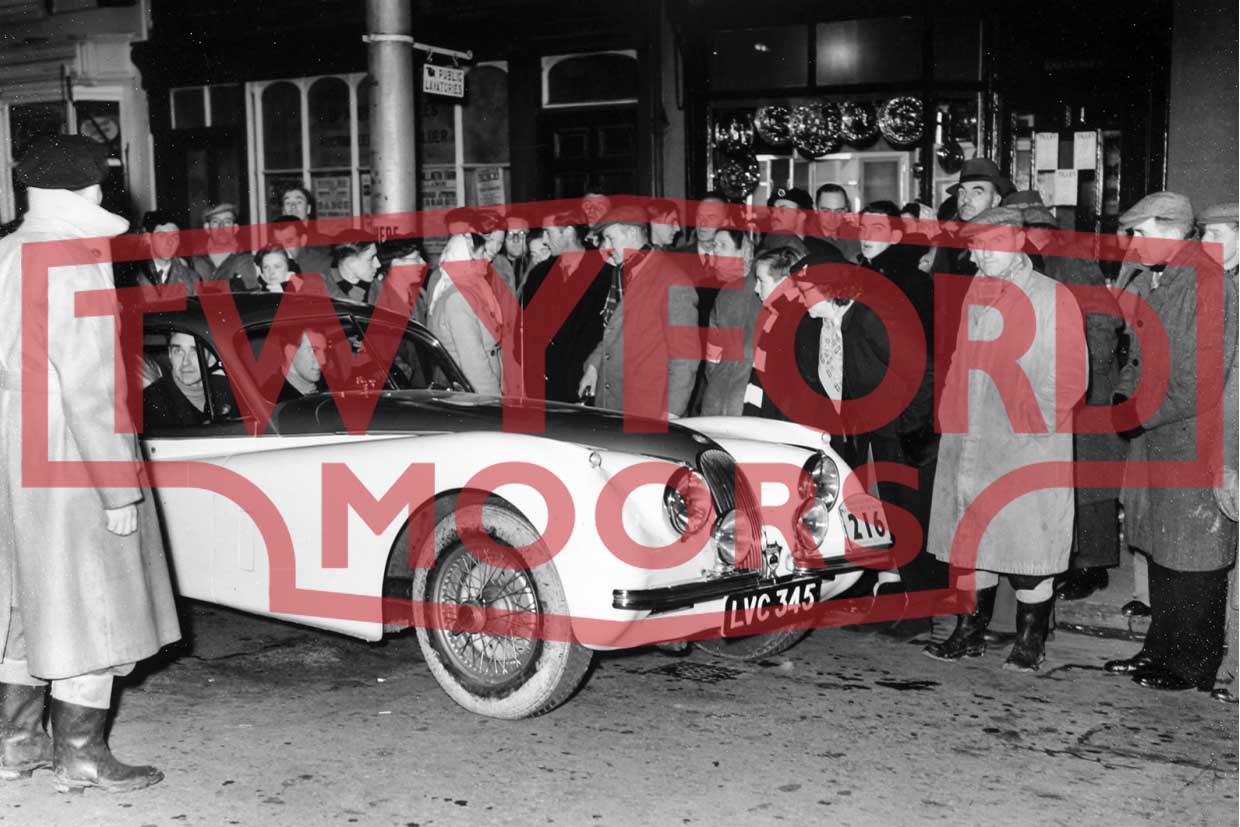 LVC was then sold to Mr Peter Balls of Norwich in 1967. Having found the car in a local newspaper classified Mr Balls agreed to buy LVC for Â£225 paying, Â£75 up front and then Â£5 per week. He used the car as his daily drive for four years until engine problems forced him to take the car off the road.

Mr Balls set about a full restoration of LVC in the mid-1970s. This was to be no ordinary restoration. His vision was for an extensively modified and upgraded XK. LVC went through a radical transformation having an E-Type independent rear suspension subframe fitted, cooling ducting, with the underside of the car completely enclosed and LT2 style doors and sills being added. All this meant that the exhaust could no longer run under the car, so it was run through the off-side sill and out through the rear wing. As can be seen from the photo, the car was also fitted with Jaguar S-Type front side lights and indicators, XK150 rear lights and the boot structure was modified.

The modifications weren't limited to the exterior, as the photographs show; the interior was radically upgraded using much of an S-Type dashboard and tunnel, armrests, Jaguar E-Type seats and steering wheel. Much of the interior modification must have been to accommodate the new sills and the extra chassis structure holding the rear axle in place.

The restoration was completed with the installation of a 3.8-litre XK engine, straight port cylinder head and an S-Type all-synchromesh gearbox. One imagines LVC must have been quite a machine by the end of all these upgrades and a unique driving experience. Mr Balls showed the car extensively in the 1980s and a Jaguar Drivers' Club article from 1984 is very complimentary about the quality of the work carried out, though the writer is clearly unsure whether or not such modifications were in good taste. Mr Balls, being aware the car was not wearing its original registration, successfully applied to the post office to reregister the car and was the man who reunited the car with the number plate LVC 345 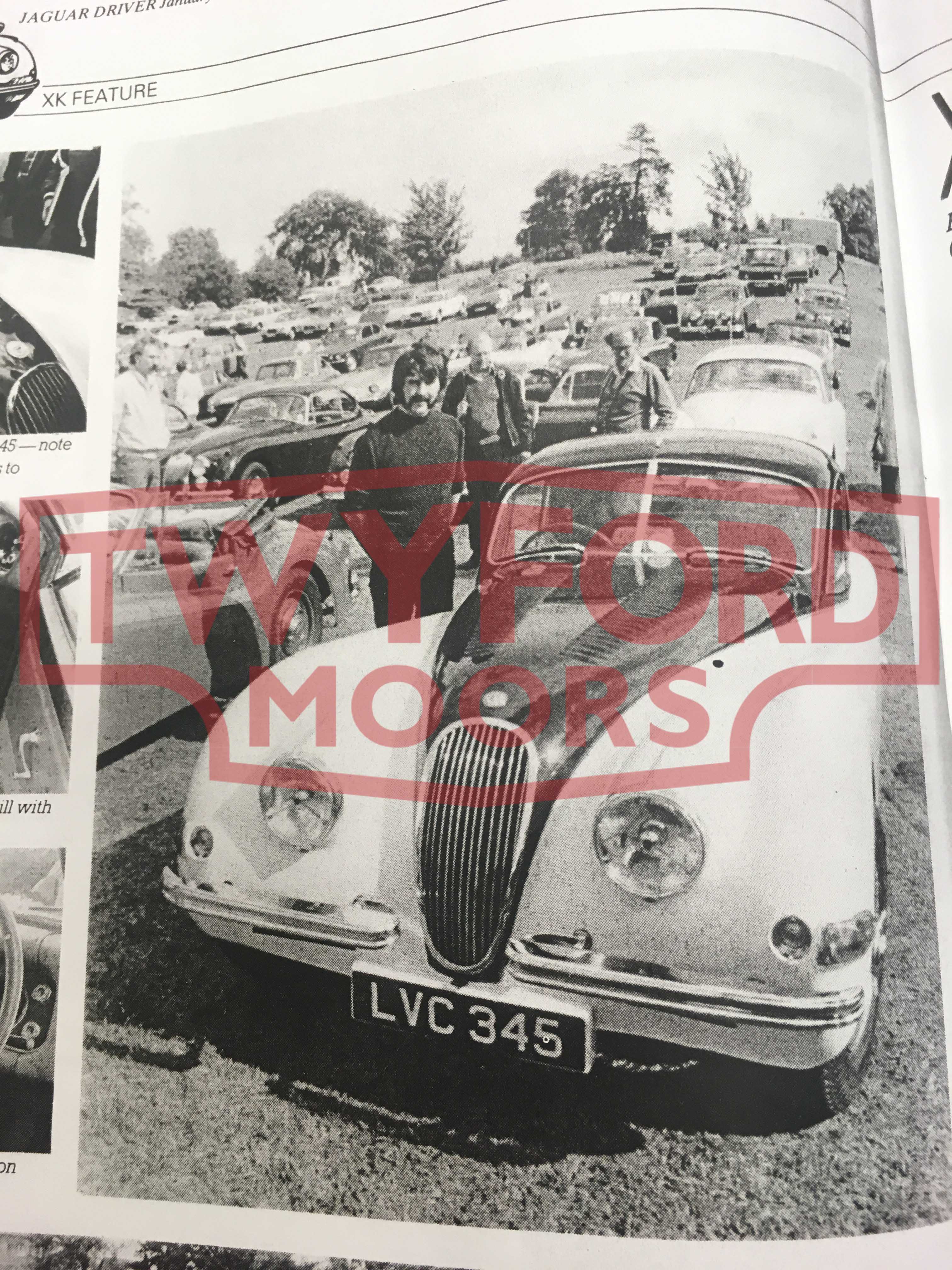 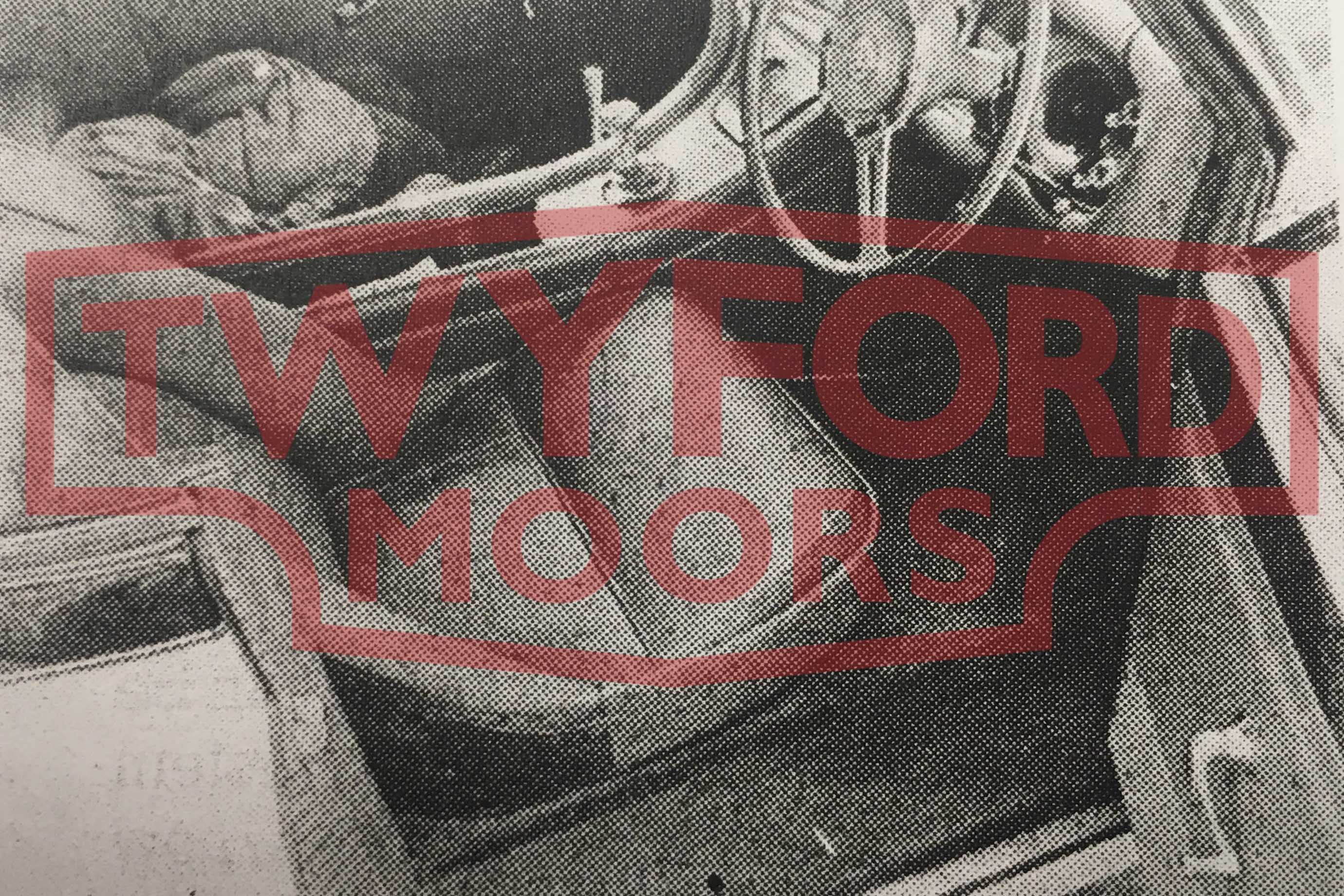 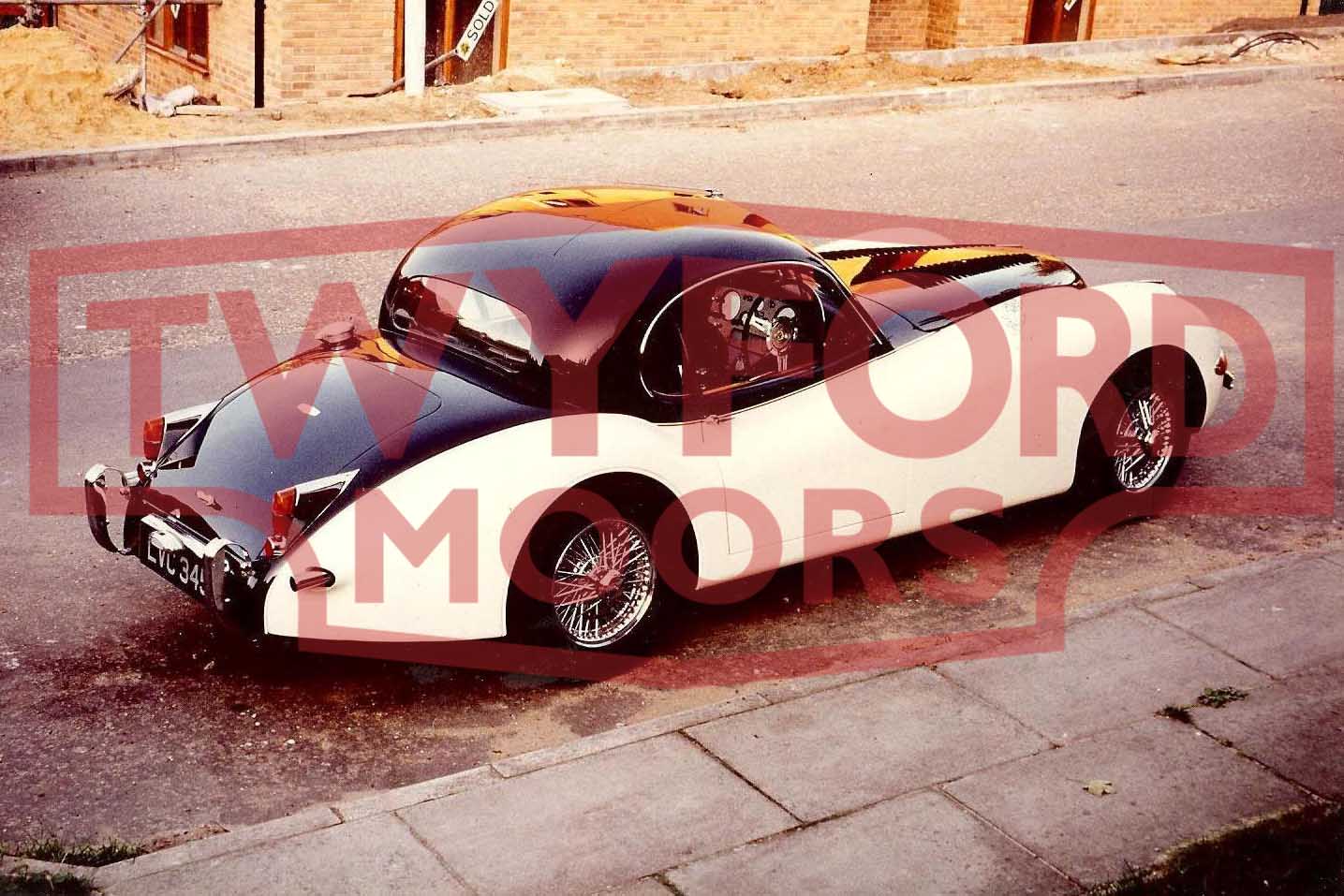 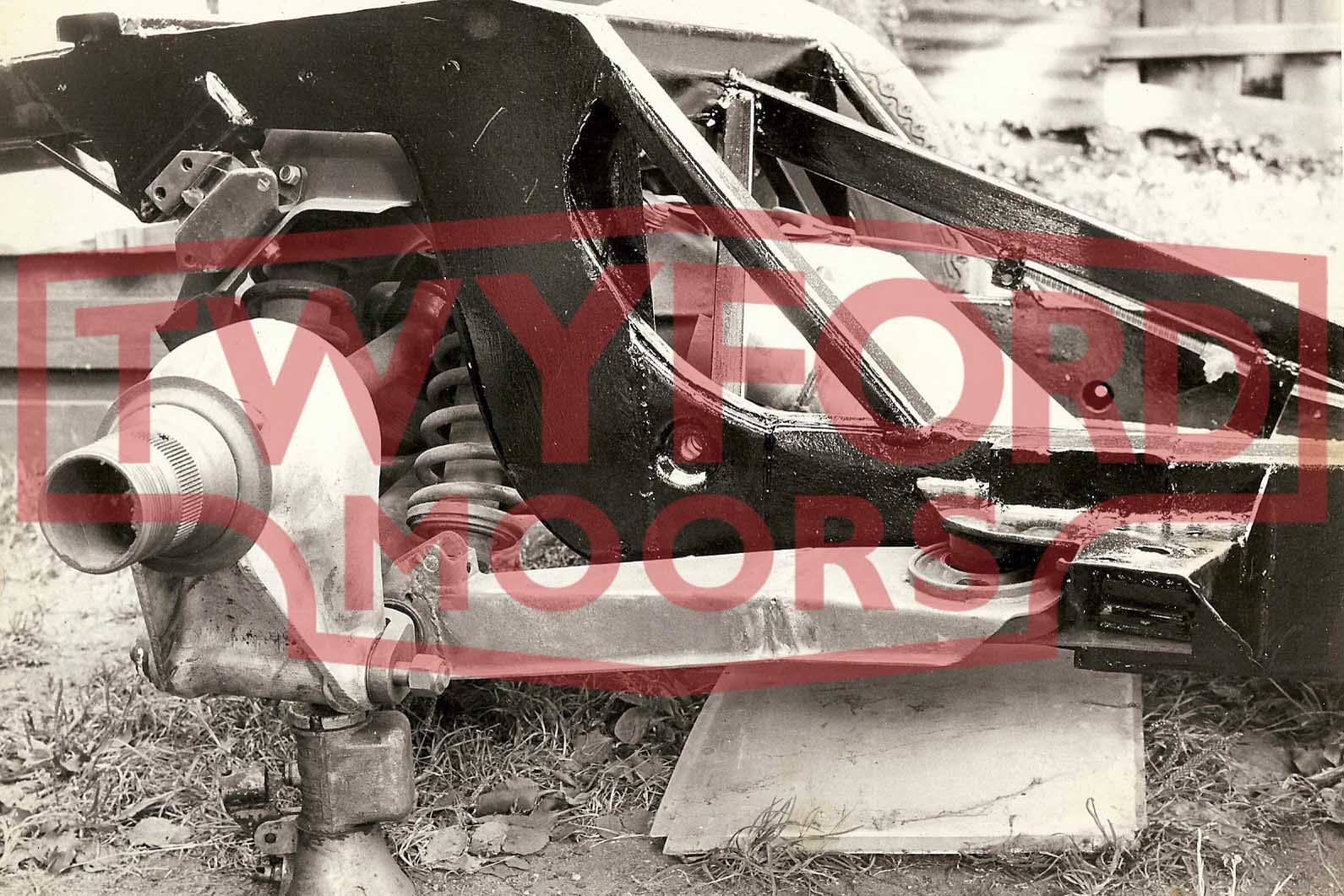 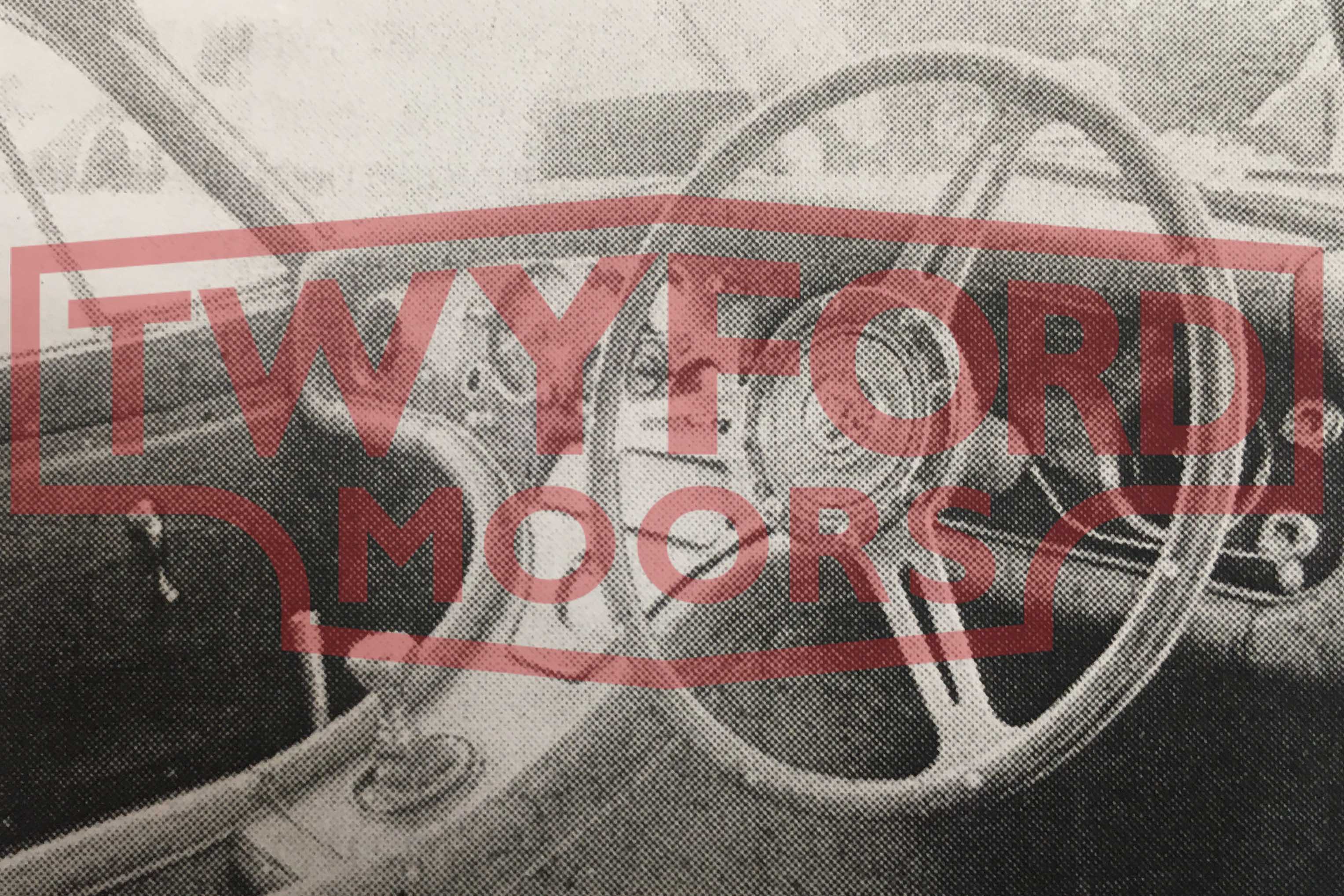 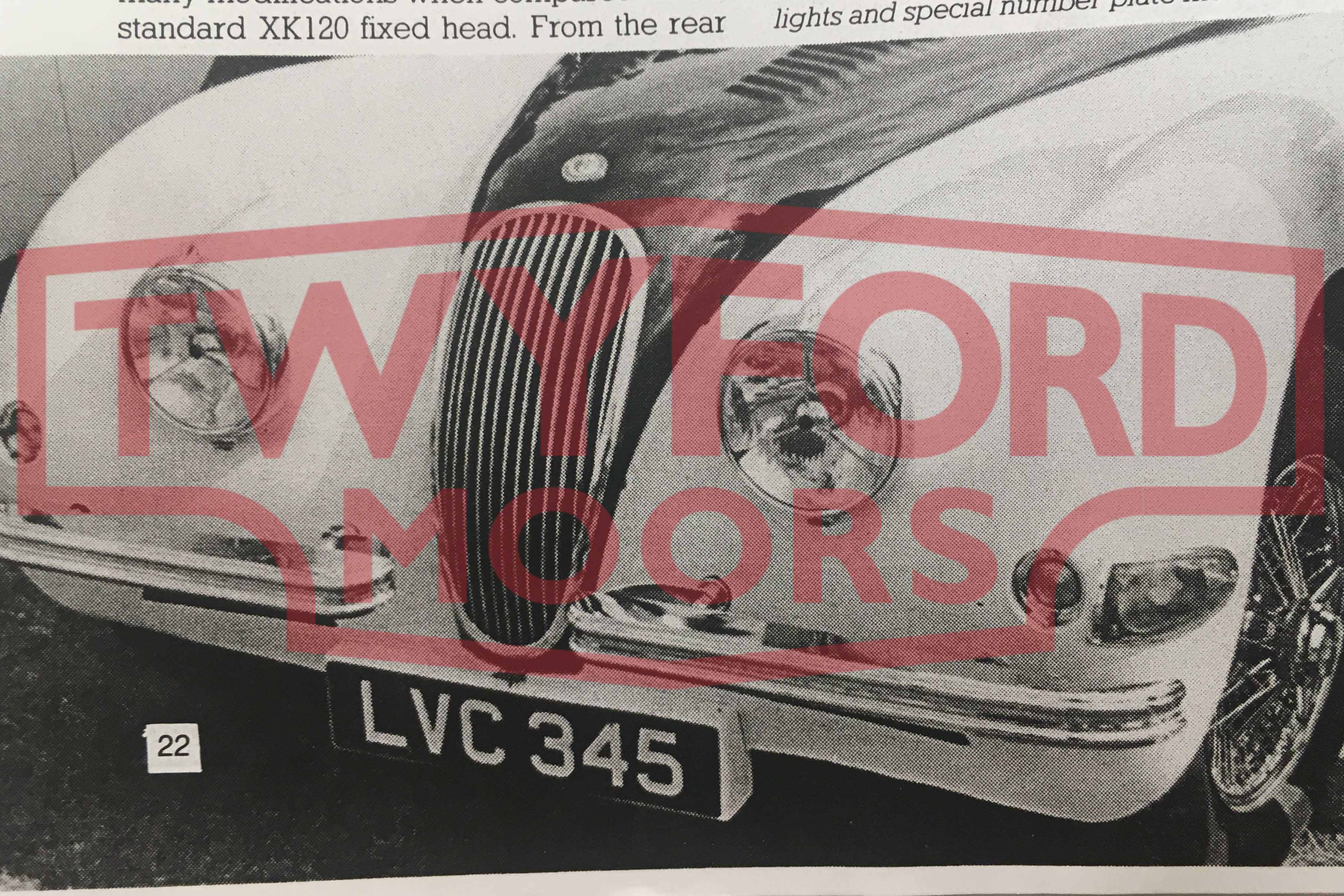 LVC was then purchased by Mr Harry Burton in 1984. The car remained in its modified state as restored by Mr Balls and was used for some years into the 1990s. Mr Burton was a keen Jaguar enthusiast and of course, recognised that this was a car of some significance and history. As such, after a few years of enjoying the car, he set about returning this special XK120 to its standard state. He can really be credited with saving LVC, helping preserve an important part of Jaguar's motoring history.

Mr Burton carried out a top-quality concourse restoration on LVC. The car was returned to standard specification in almost all regards including the original drum brakes. The car did remain right-hand drive. When the body was lifted off the chassis, as shown in the photos, Mr Burton found a chassis which was almost unrecognisable as an XK120. As such he did what any sensible restorer of the period would have done and replaced with another sound XK120 chassis. These days, nobody would dream of swapping a chassis, particularly on such an important car, but at the time far less attention was paid to 'matching numbers' and spare chassis were relatively ubiquitous. Importantly, the original chassis was not thrown away, rather Burton kept it safely in storage.

The freshly revived LVC went on to have a glittering career over the next 25 years at concourse events winning many awards and being the star of many a show. LVC was sold to Vic Norman in 2001 who continued to show the car and had great success at many events. In the intervening years, Mr Burton senior sadly passed away. Enter his son, John Burton to continue the family tradition as a Jaguar enthusiast. John is well known in Jaguar racing circles. John inherited the old chassis, but after several years of not knowing what to do with it, he passed it on to Twyford Moors' owner, Nik Rochez. When LVC came back onto the market in 2019 Burton junior grabbed the opportunity to return LVC to the family stable and then realised there was an opportunity to reunite the car with its original chassis. 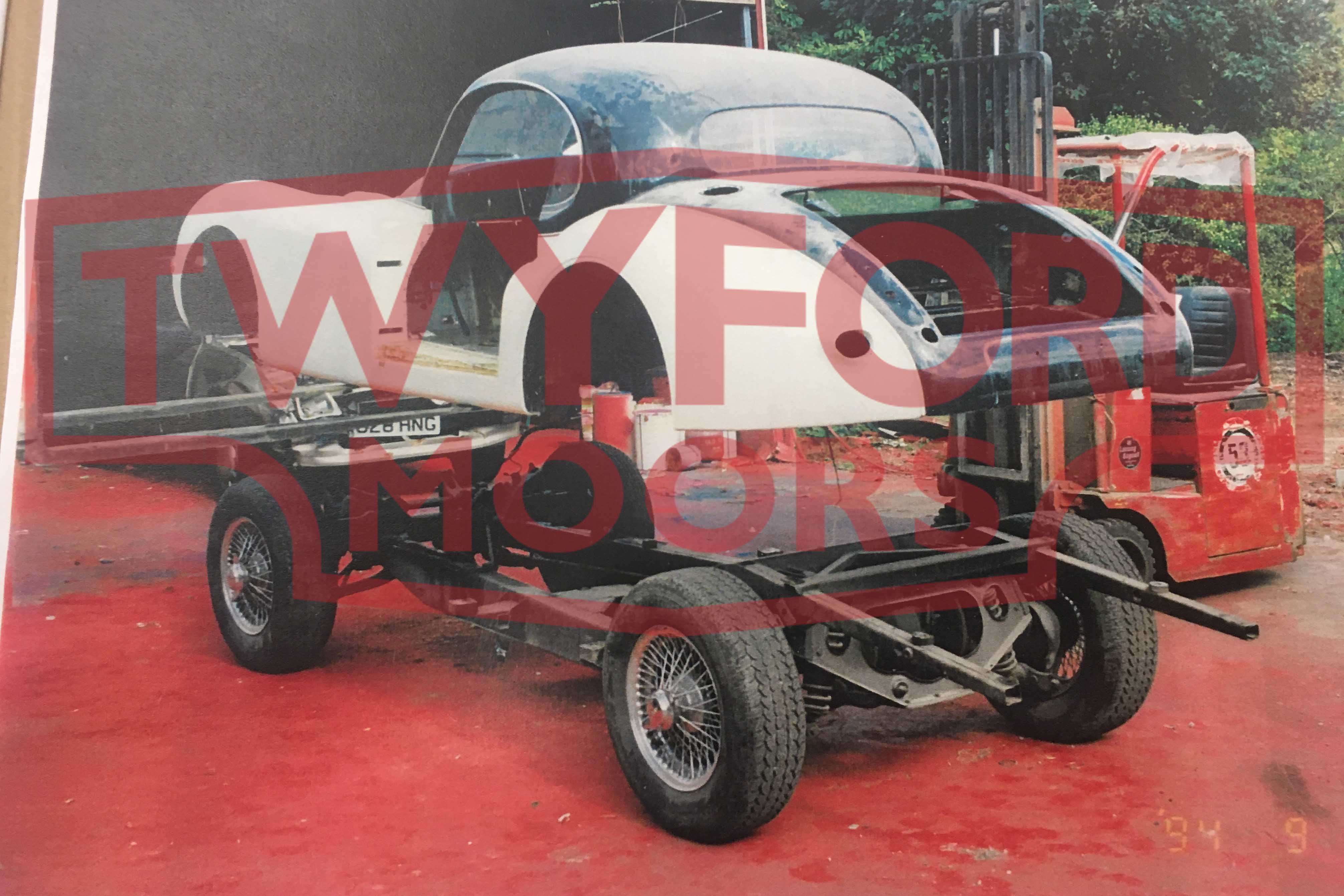 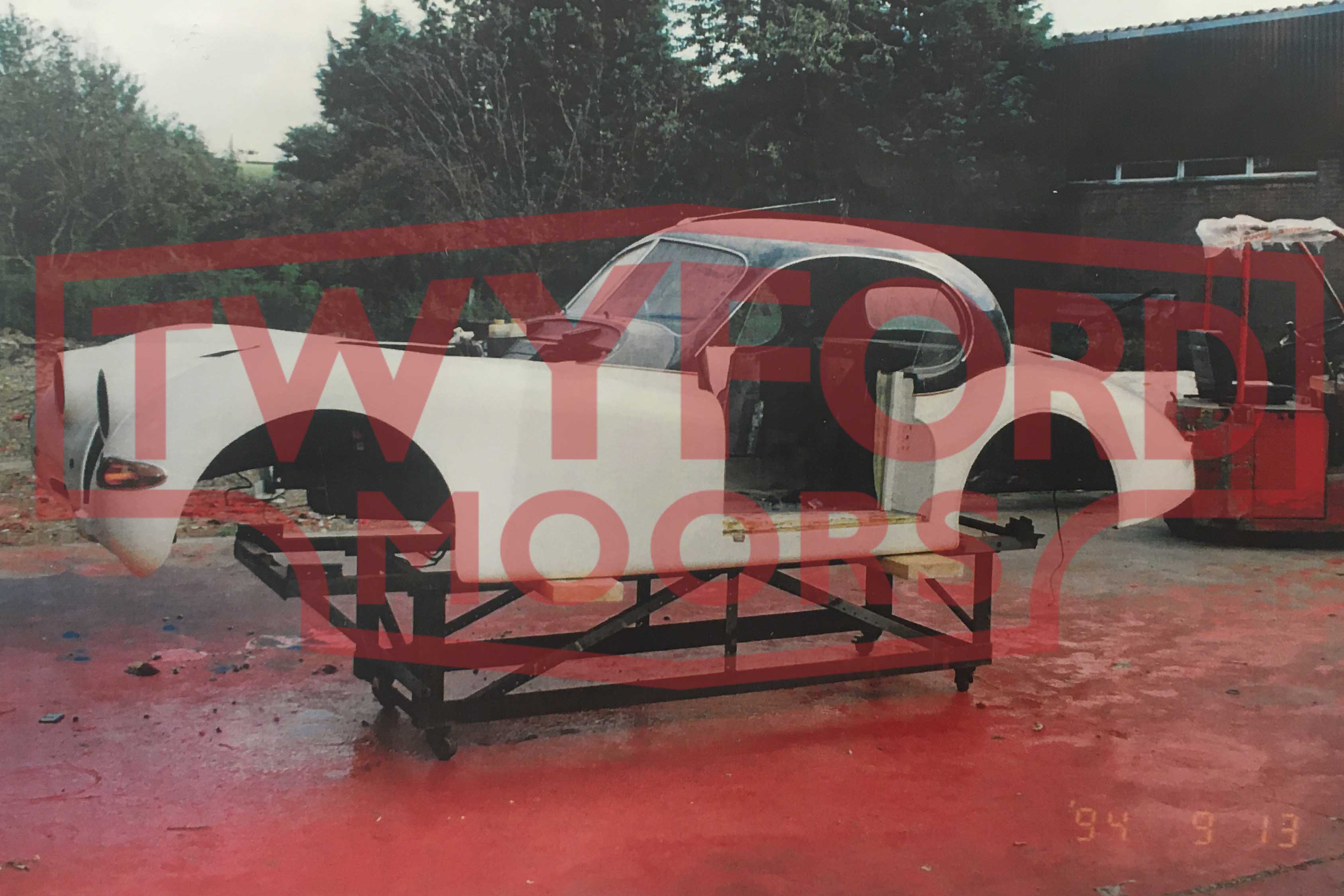 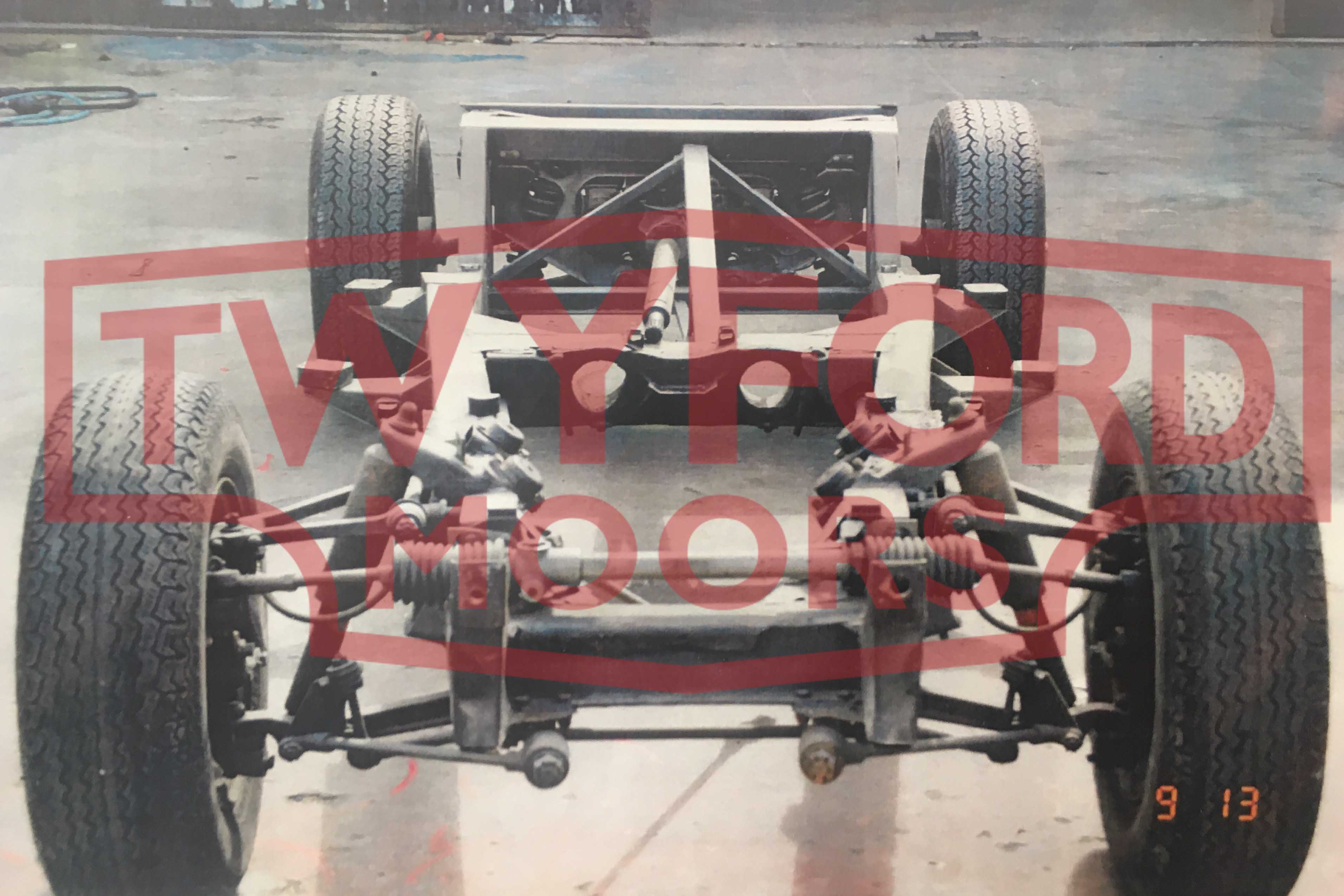 This is where Twyford Moors come into the story. John approached Nik Rochez to regain the original chassis. Rochez agreed on the condition that the chassis and the body should be reunited. John Burton wanted to finish his father's work of returning LVC to its original and making it a true part of Jaguar's rich heritage. At the same time, John wanted to acknowledge the full history of the car and didn't want to whitewash Peter Balls' part in the car's history. As such, John's brief was to return LVC's original chassis to a point where standard XK120 suspension and parts could be fitted but otherwise to retain reminders of the life the car has lived.

Restoring an XK chassis is never an easy task but LVCs proved to be a real challenge given its extensive modifications and alterations. Most of the rear structure had been cut away and replaced to allow fitment of the E-Type subframe and all of this had to be removed, without upsetting the geometry of the chassis and then the correct parts reinstated. Once the rear suspension was back to XK120 specification we set about a number of minor repairs due to corrosion and the odd bodged historic repair. There were many distinctive features of the chassis which were left in place to acknowledge the chassis history. In particular, several unused brackets and a flange are running right the way around the chassis to which the undertray constructed by Mr Balls used to attach. After work was completed on the chassis, we stripped LVC down carefully, removed the body from the 'replacement' chassis and, after 25 years, reunited the body with its original chassis! From there, we rebuilt the car using the original parts and in line with Burton senior's restoration. 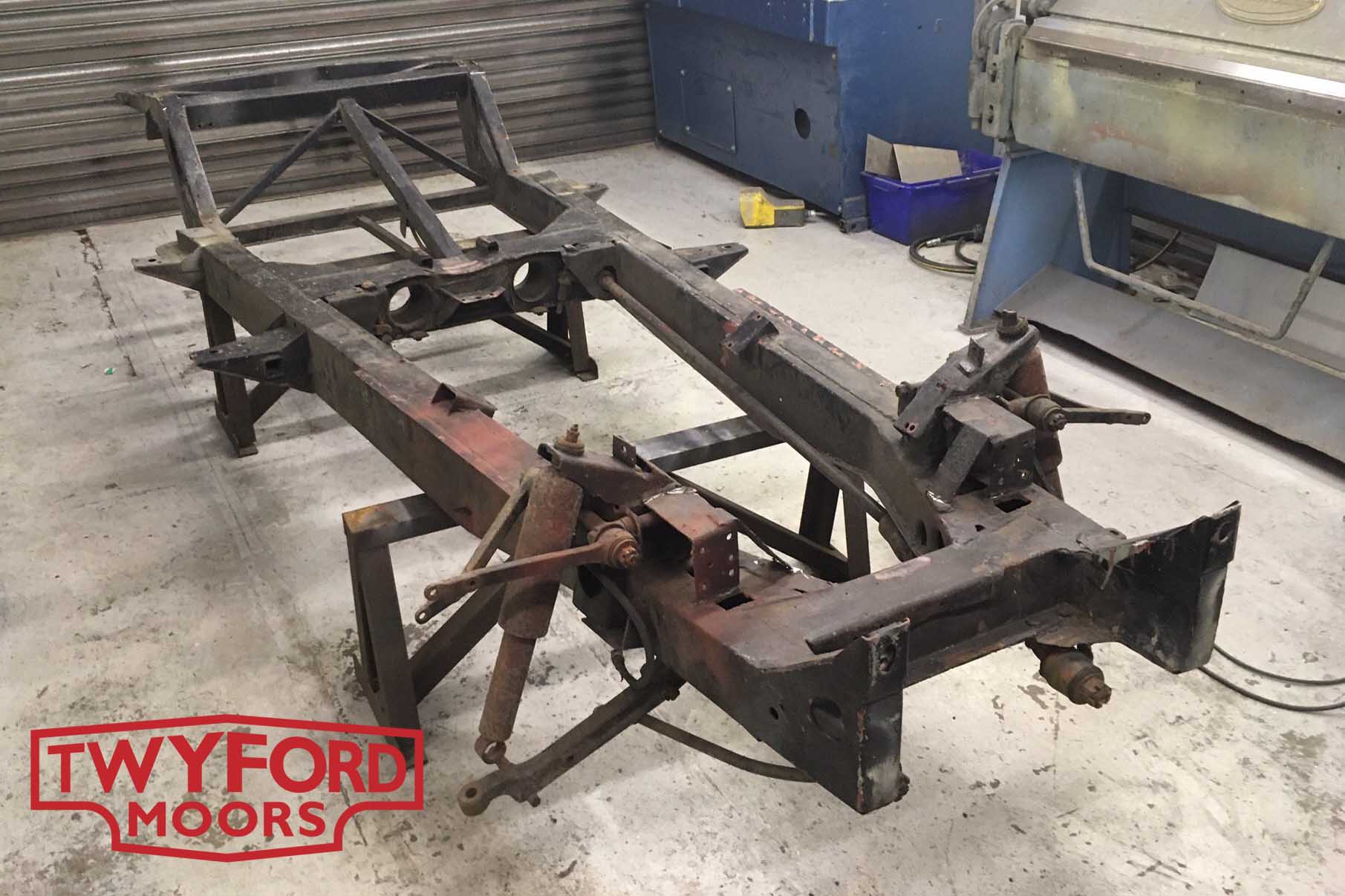 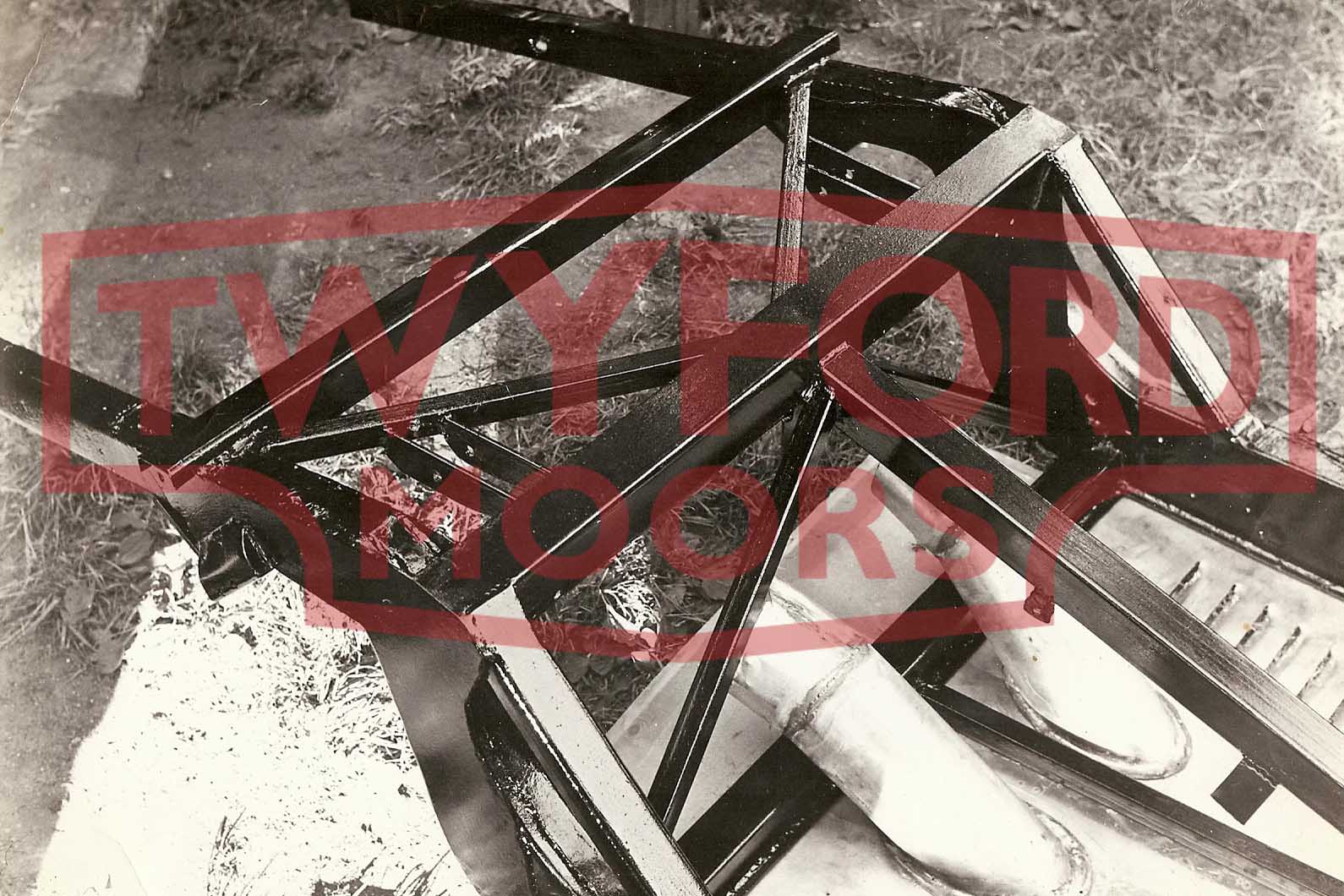 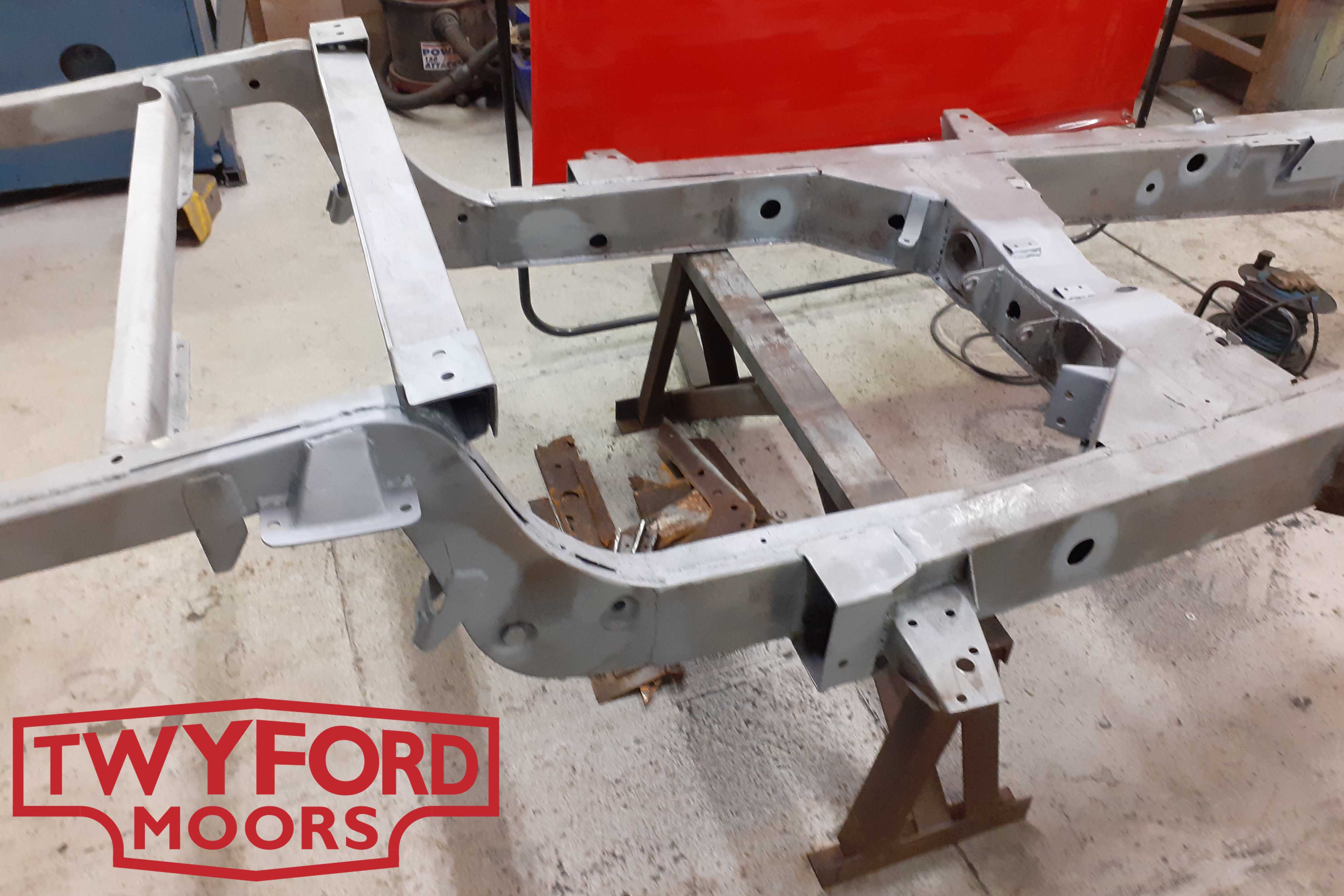 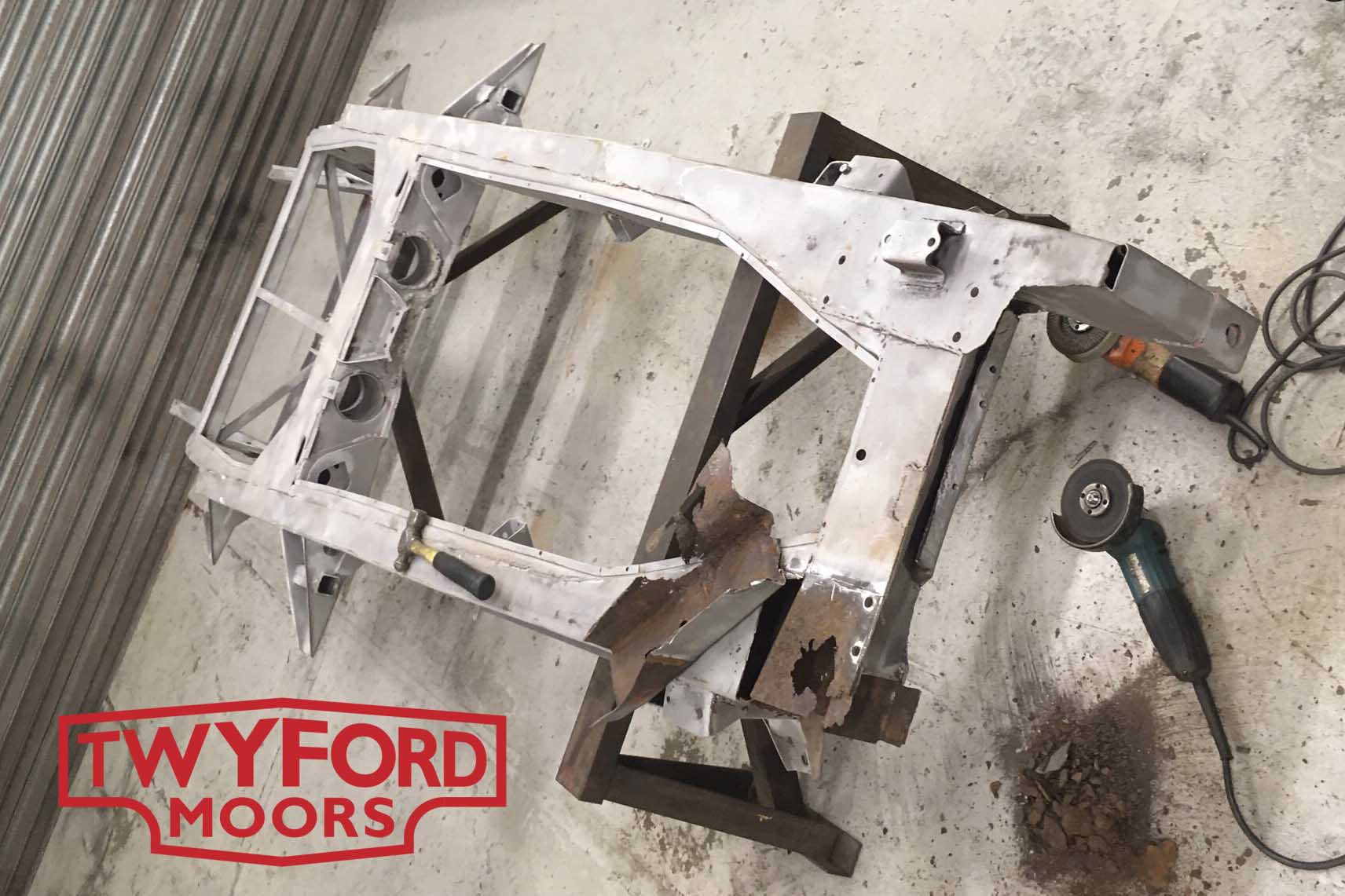 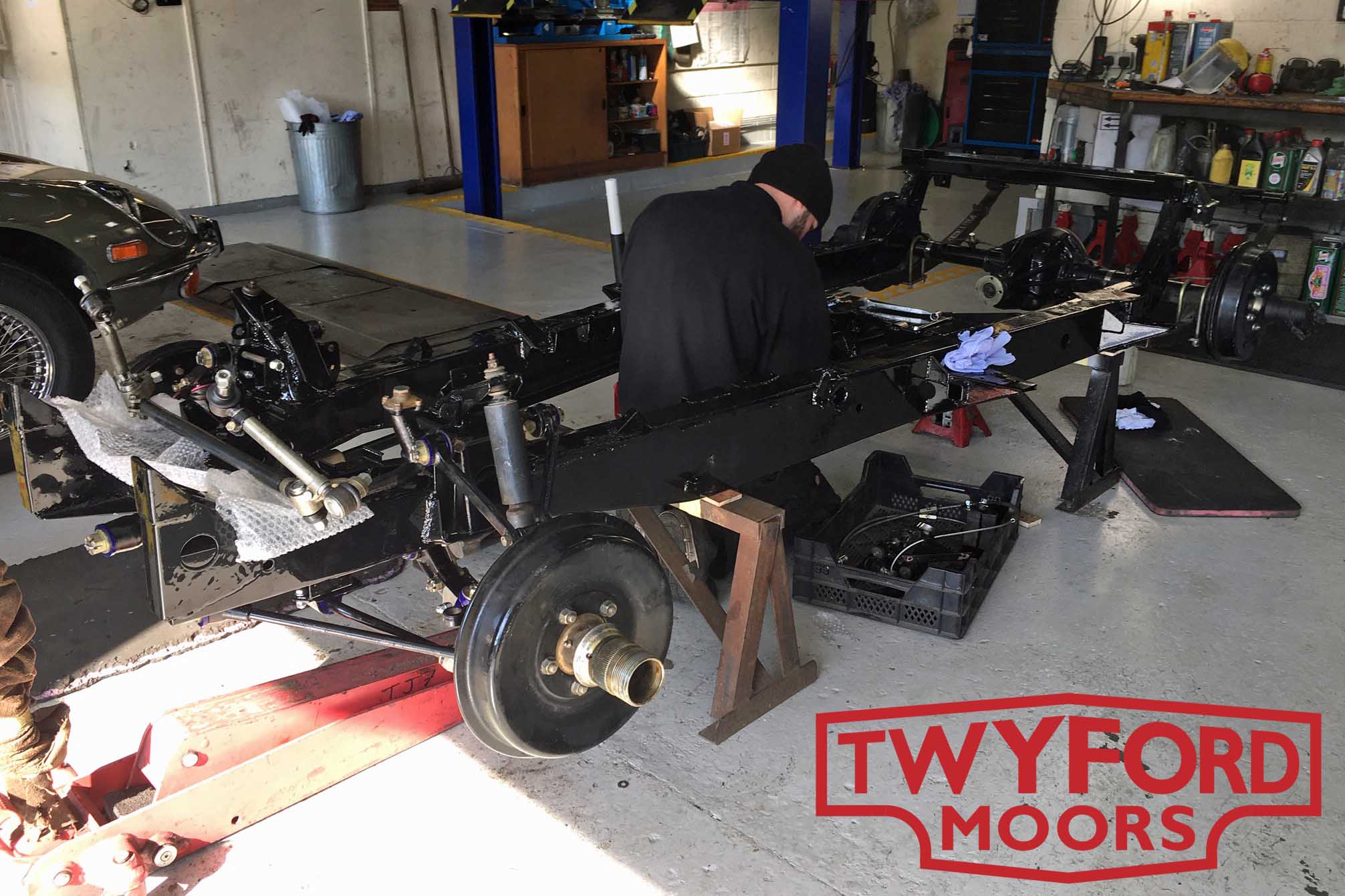 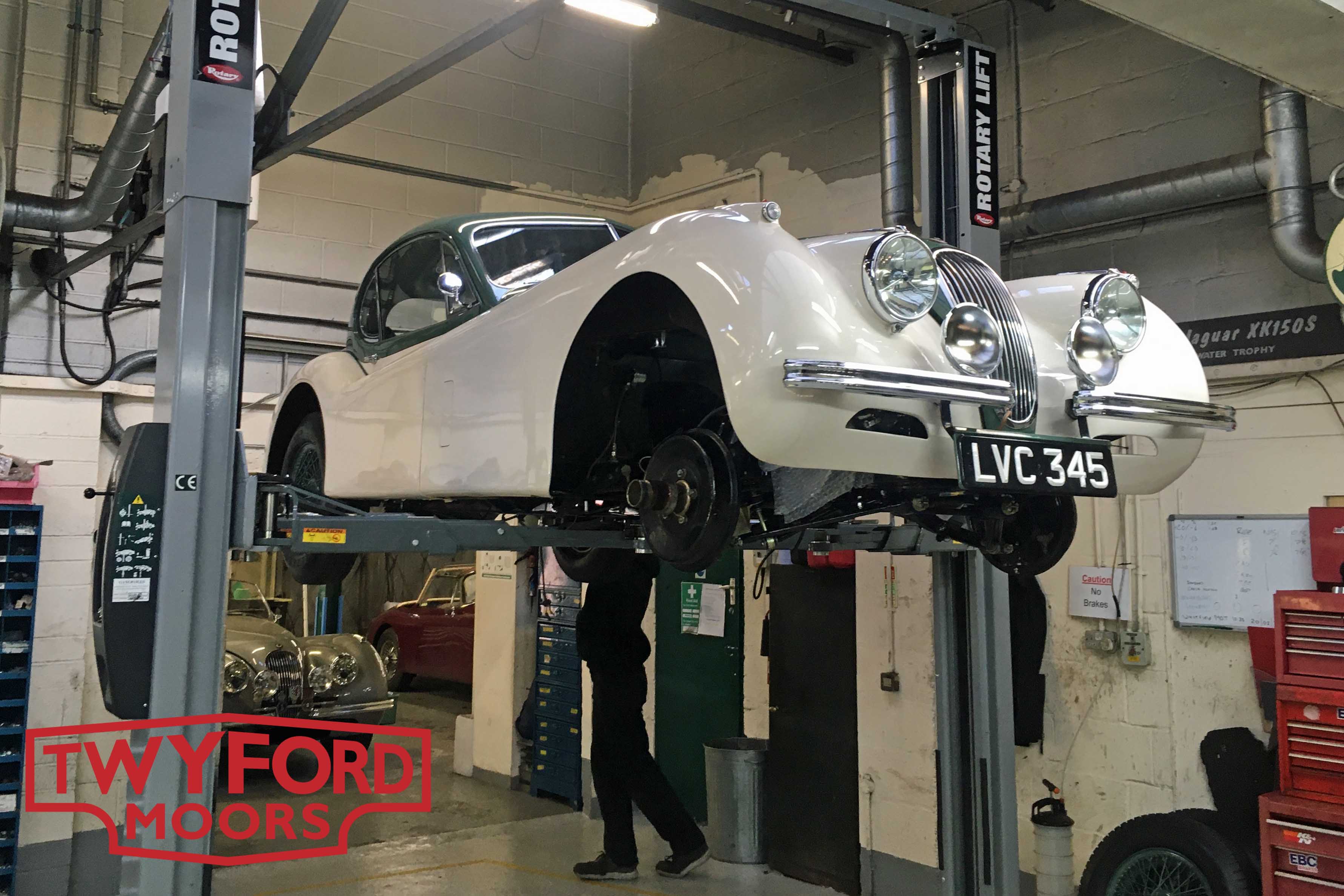 LVC was completed and delivered to John Burton at the beginning of August. John then undertook final preparations before taking the car to the 2020 London Concours at the Honourable Artillery Company in August. The car was invited to take part in 'The Pursuit of Speed' class. This class celebrates the 'innovative technologies of the crowned speed kings through the decades. The class featured some absolutely stunning and special cars including a 1959 Mercedes 300 SL Gullwing and a 2018 McLaren Senna. Despite this truly stiff competition, the XK120 won the class and received many admiring comments. It is a delight to see this special car recognised in such a way and to see the XK120 acknowledged as the cutting-edge supercar of its day. Jaguar truly advanced motoring technology, and public expectations, in the 1950s and in so doing laid the groundwork for what is now the Jaguar heritage. 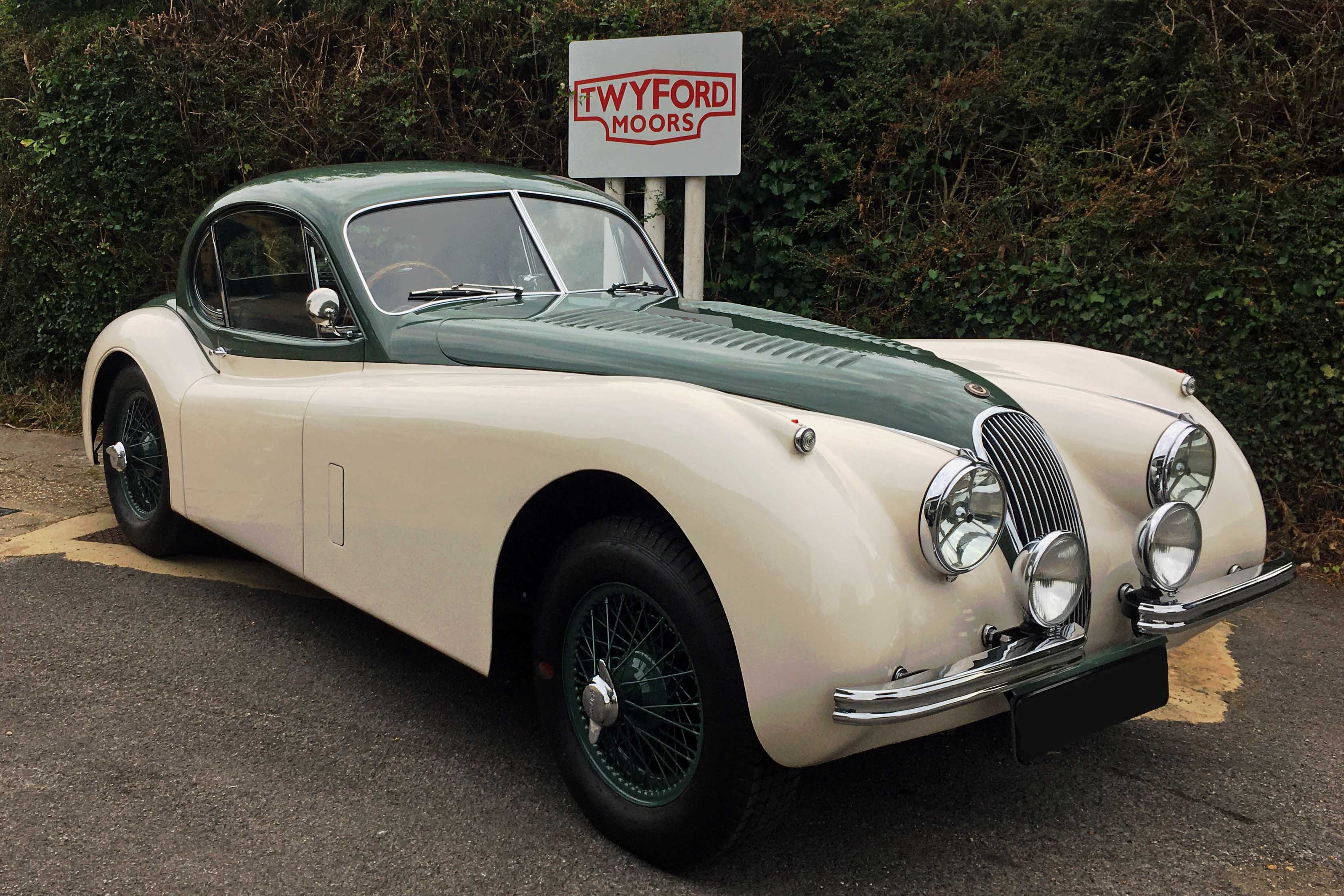 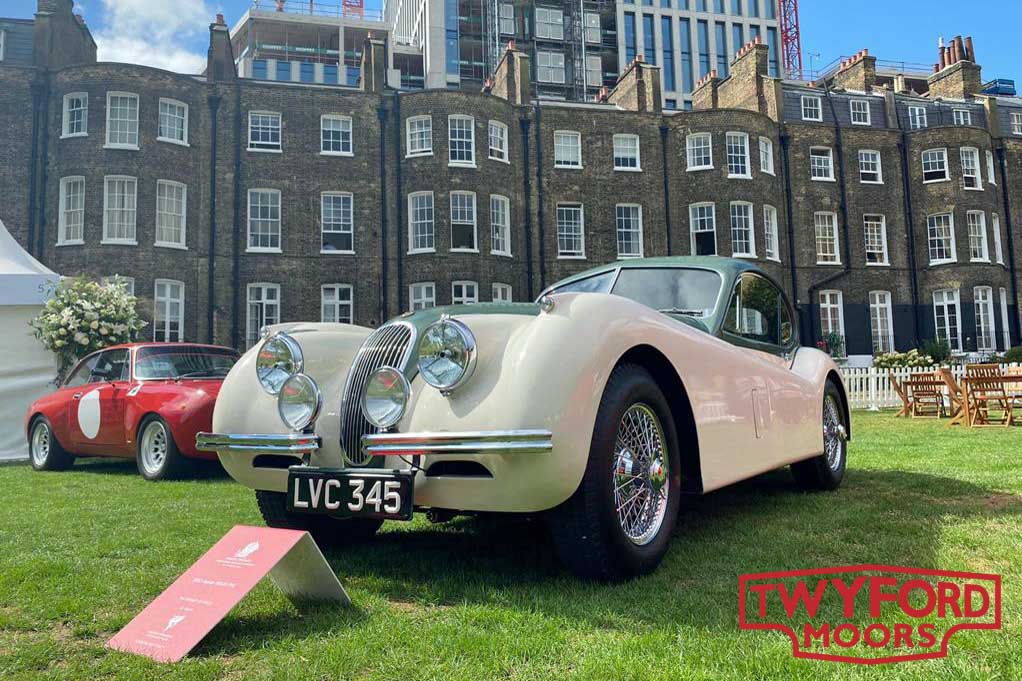 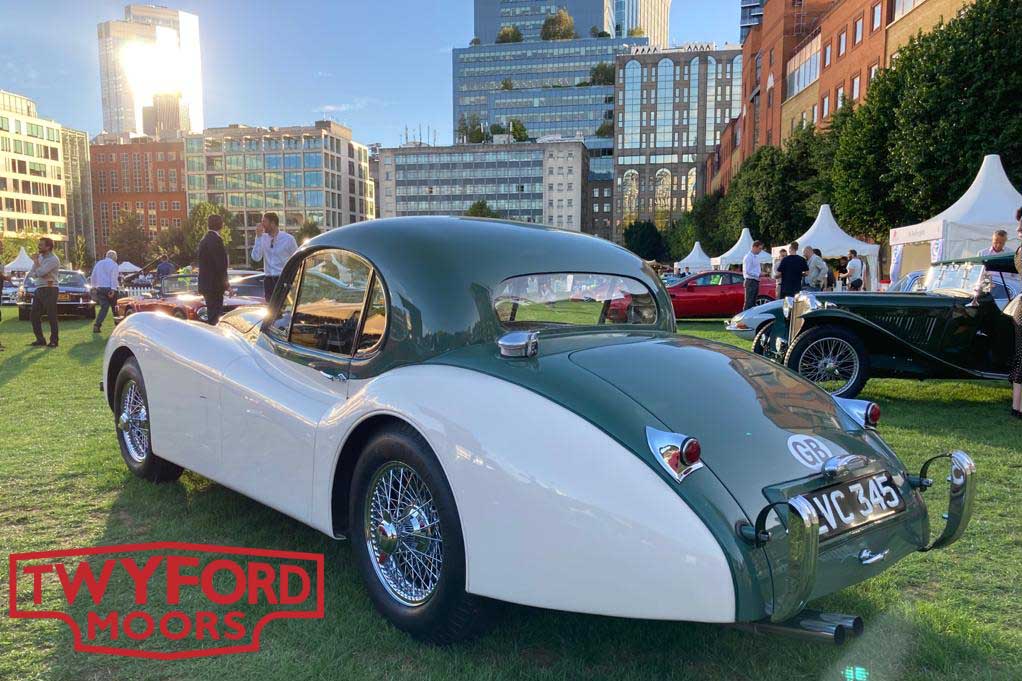 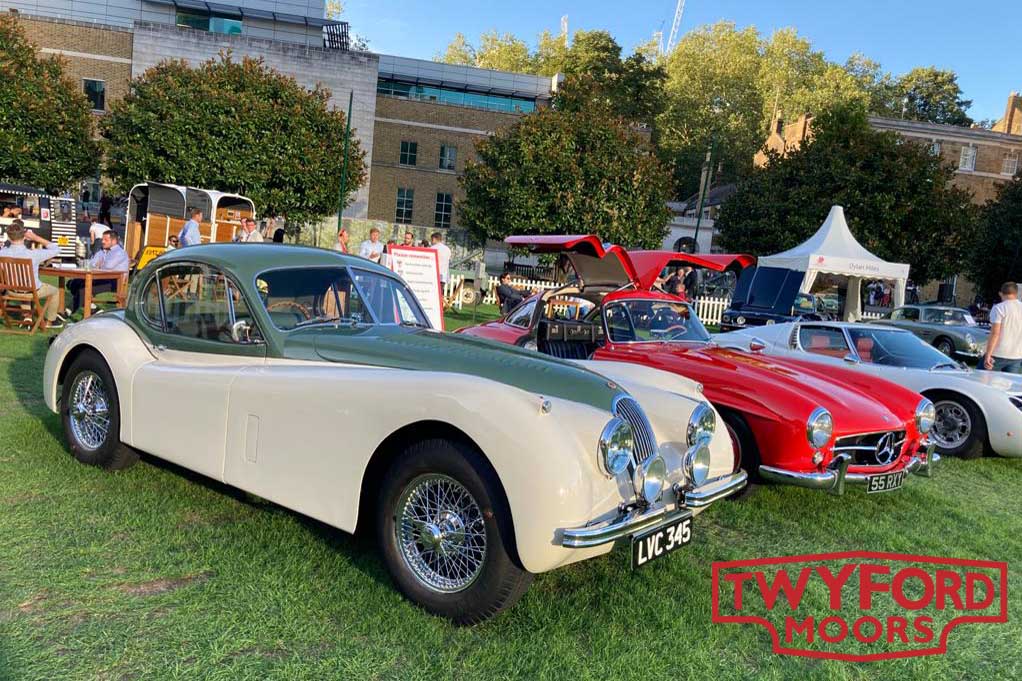