We are at the end of another busy week for both the workshop and the showroom. New customers have taken delivery of their cars and ongoing customers have come and gone from the workshop having their cars serviced. On top of that show season is in full swing with positive reports across the board.  We were even able to visit the fabulous Goodwood Festival of Speed last weekend and it was wonderful to be back at such a special event.
In this weeks' update we look at an XK150 with greasy brake pads, a noisy E-Type, an XK140 engine rebuild and a filthy wiper motor. 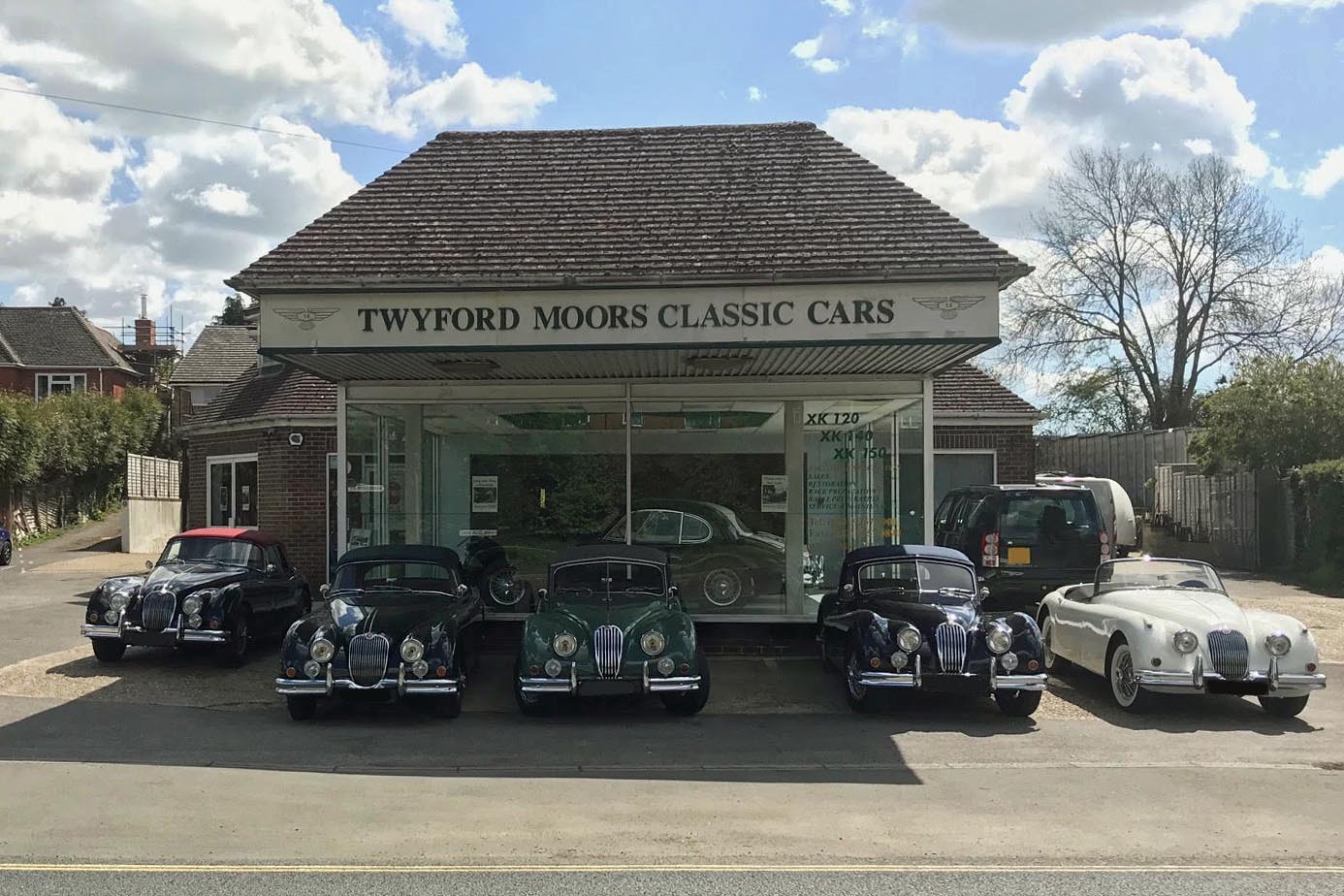 Keep the noise down!

This raced prepared Jaguar E-type is one of our annual visitors. Although it was built as an out and out race car the owner generally uses it to enjoy track days alongside his XK120. Most recently we took the car to Goodwood for the Jaguar Drivers Club track day where the car elicited many smiles per gallon.
Unfortunately, they were not able to fully open the throttle at Goodwood as they would have been flagged off for noise. As time has gone on the decibel limit at track days has generally come down and for understandable reasons marshals are generally quite strict about this. So, we have been set the challenge of making the car quieter without restricting performance. The solution was a new pair of rear silencers (the ones fitted were straight through) which can be repacked if necessary to further reduce noise. Though these new quieter silencers may eat away at a couple of bhp, being able to fully open the throttle on the pit straight at Goodwood should more than make up for it. 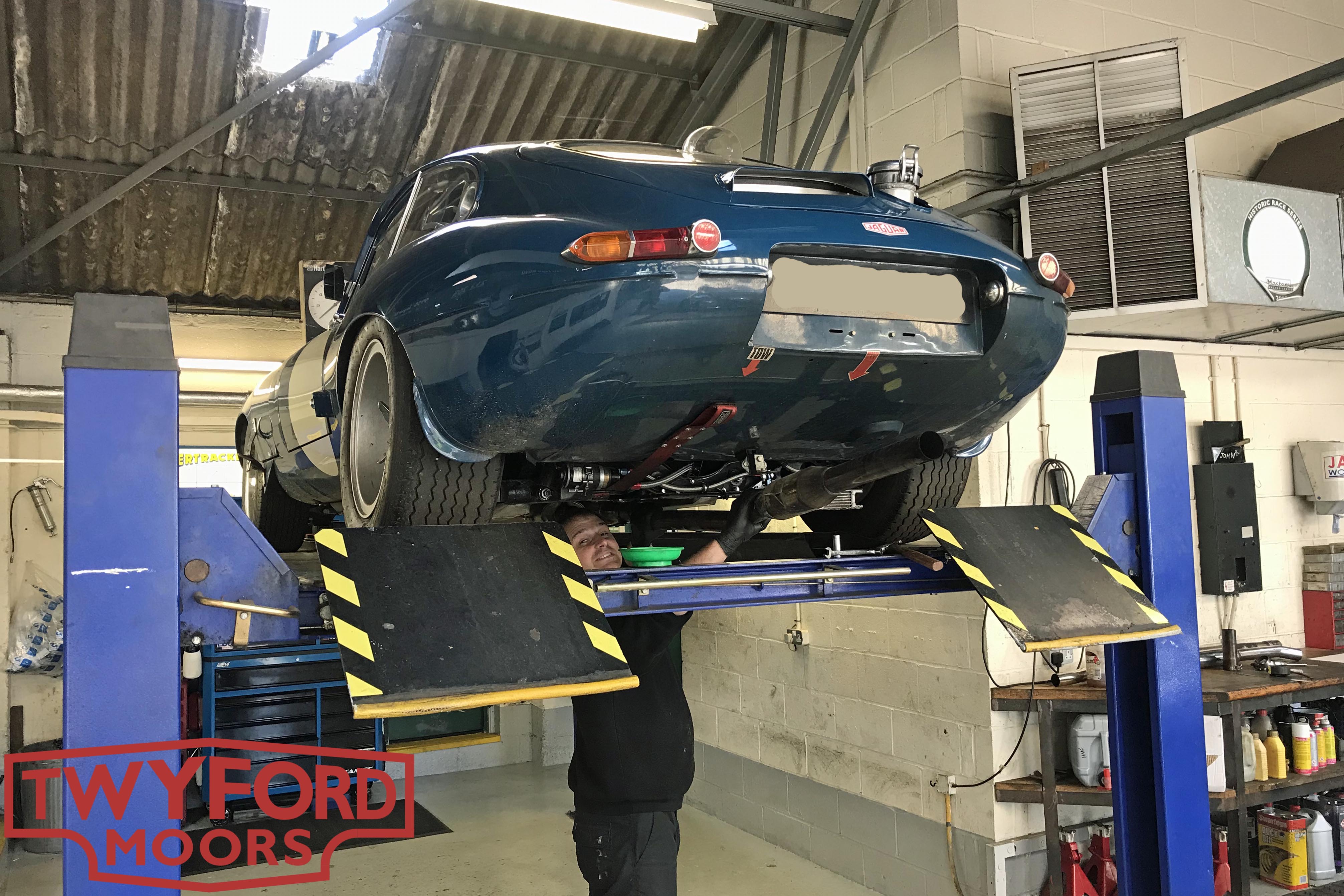 Pictured here is an XK150 rear brake calliper which is covered in grease. Clearly this is far from ideal and significantly compromises braking performance and therefore the safety of the car. We see this this fault quite frequently; it is caused by the rear hub seals allowing grease to leak out onto the brakes. It can sometimes be difficult to pick up visually initially as small amounts of grease will burn off or be absorbed by the brake pads but the example here is quite extreme. This can often manifest with poor handbrake operation, despite the handbrake being adjusted properly, and will often be picked up during an MOT on the brake tester.
The original leather type seals simply fail overtime and allow grease to leak out of the bearing and down the rear of the brake disc. We offer a modern type double lip seal which will keep the grease where it's supposed to be and the brakes working perfectly. 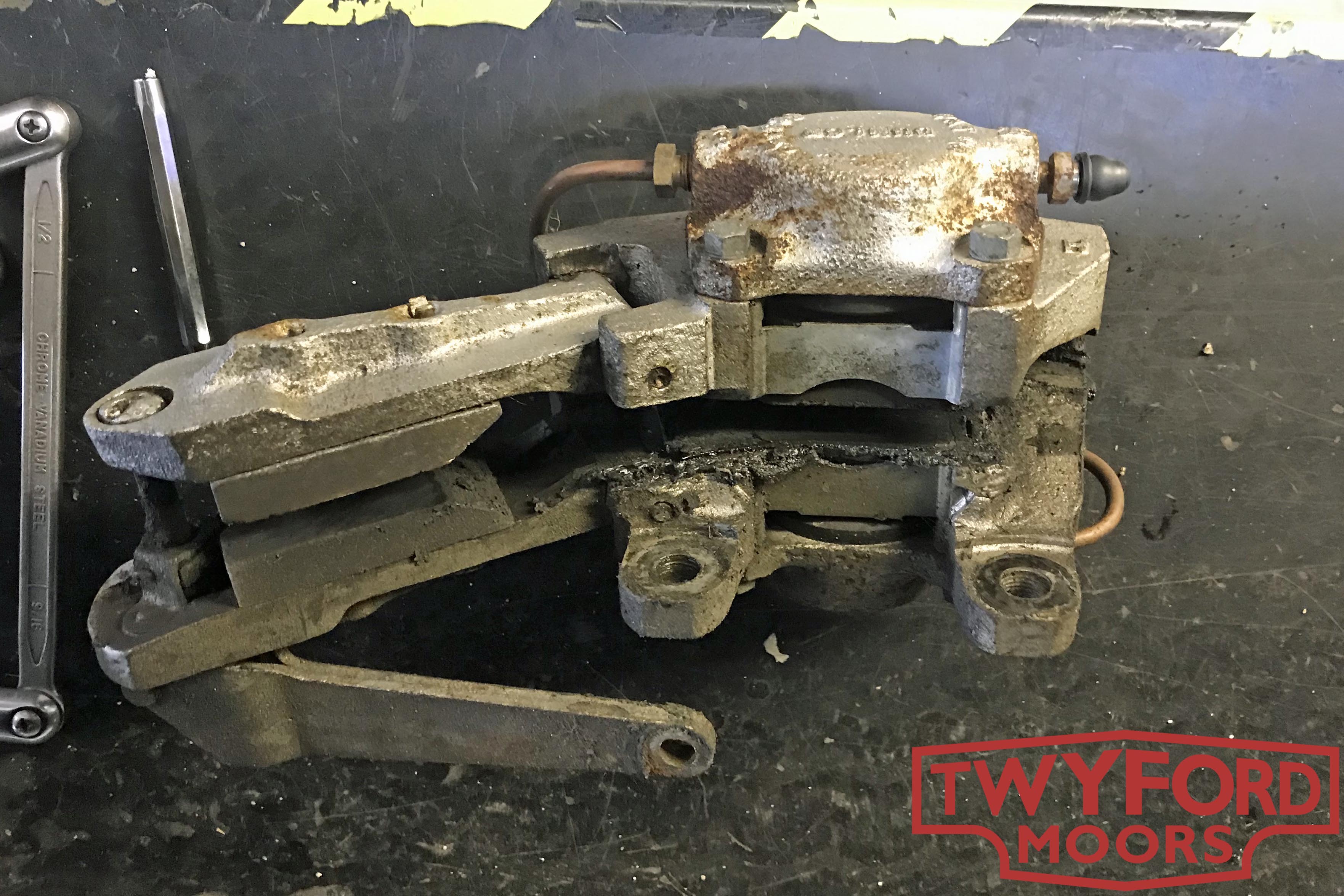 The model we usually have the most demand for is the XK140 drophead coupe. This often surprises people who may think the XK120 OTS with its pure lines or the XK150 with its additional cabin space are the most sought after. In reality though the XK140 drophead, retaining the sweeping lines of the XK120, additional cabin space, rack and pinion steering and an easy to operate hood, is the car most people look for. They offer the ideal combination of comfort, style and practicality and in many ways are the pinnacle of the XK range. Add a couple of well-considered upgrades such as disc brakes and a five-speed gearbox and you have the ultimate classic tourer.
The XK140 pictured here has just come in for sale and is a rare special equipment (SE) model. It has the much sought-after C-Type cylinder head and has been extensively upgraded. If you are after a practical and usable classic it really does tick all the boxes. 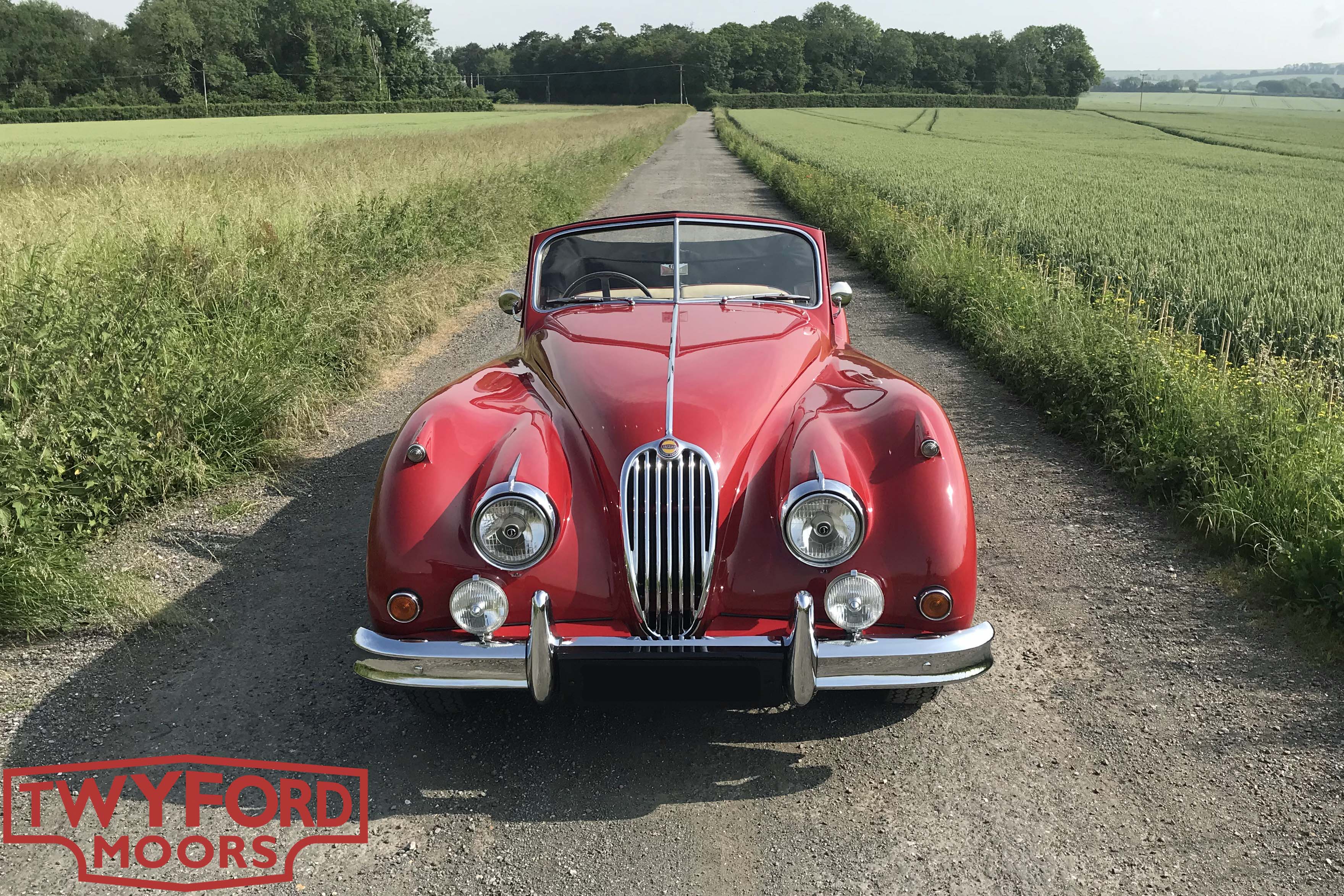 Pictured here is a 3.4 litre XK engine which has just been rebuilt. The engine has been built to a 'fast road' specification including gas flowed cylinder head, larger valves, fast road profile camshafts and forged pistons. Every element of the engine has been balanced and blueprinted to ensure that the engine is as smooth and free revving as possible. Additionally, this engine has our uprated rear crankshaft seal which replaces the original and fundamentally leaky two-part seal with a modern lip seal. This does away with the characteristic XK rear main oil leak.
This engine will shortly be fitted to the chassis of the ex-Jaguar show car which we are currently restoring. This car is available for sale with the bodywork complete and in primer waiting to be painted the buyers chosen colour. The restoration will then be completed to the buyer's specification. For more details, please visit the cars for sale section of our website. 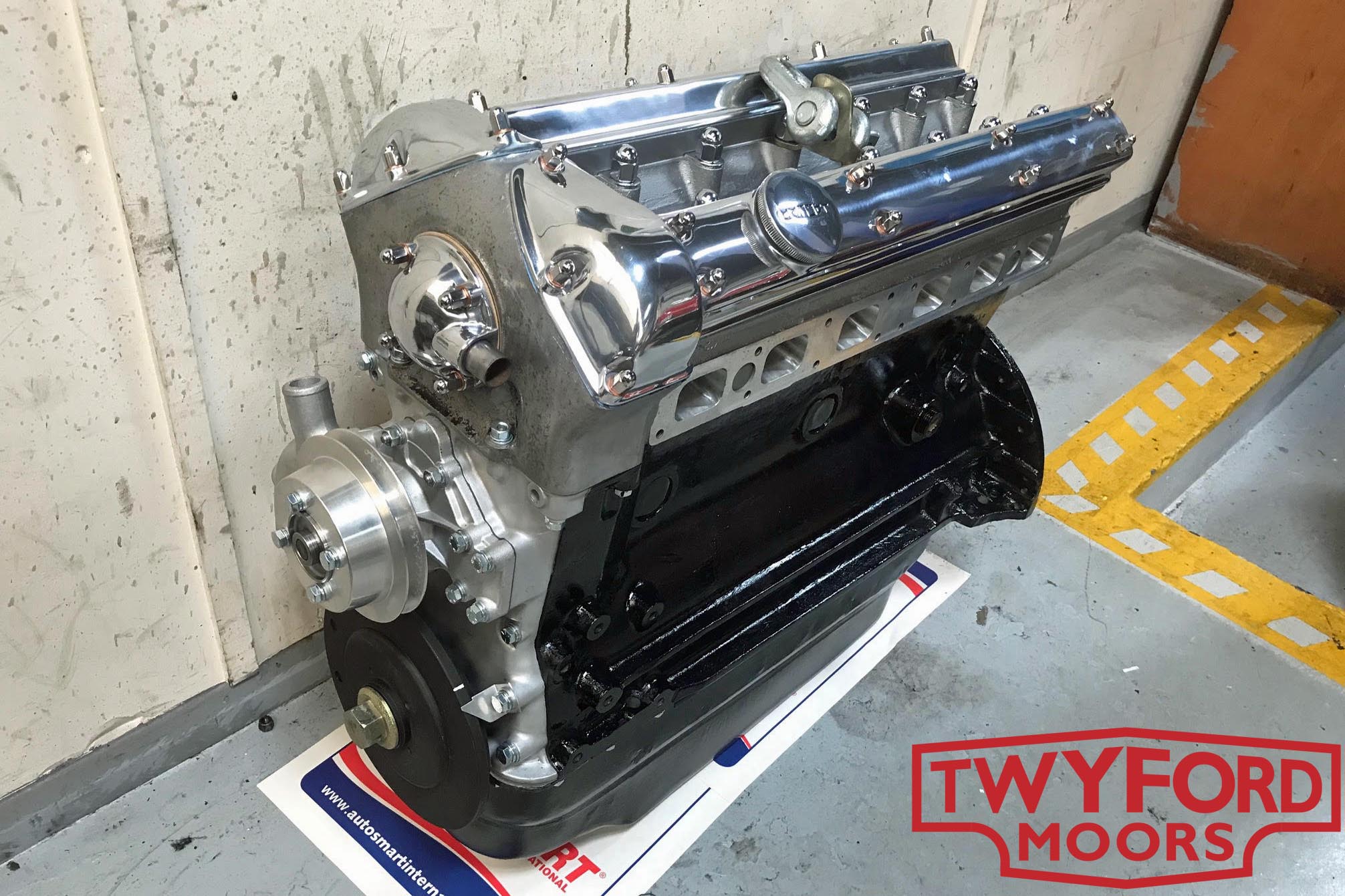 The lovely XK150 drophead coupe pictured here has just been sold and will shortly be heading off to its new home. Before delivery, the new owner requested that the car have power steering fitted. This really does make good sense as the car has several upgrades already to make it more usable and power steering really does improve the everyday driving experience. The automatic gearbox will pair rather nicely with the power steering to create a very leisurely car to drive.
If you are looking for an XK but cannot find one which is the exact specification you are looking for please do get in touch to discuss our upgrade options. It can be an amazingly effective to buy a standard XK and then upgrade it to the specification you want. That way you get exactly the car you're looking for. So be it a five-speed gearbox, power steering or electronic ignition please get in touch to discuss the upgrades we have on offer. 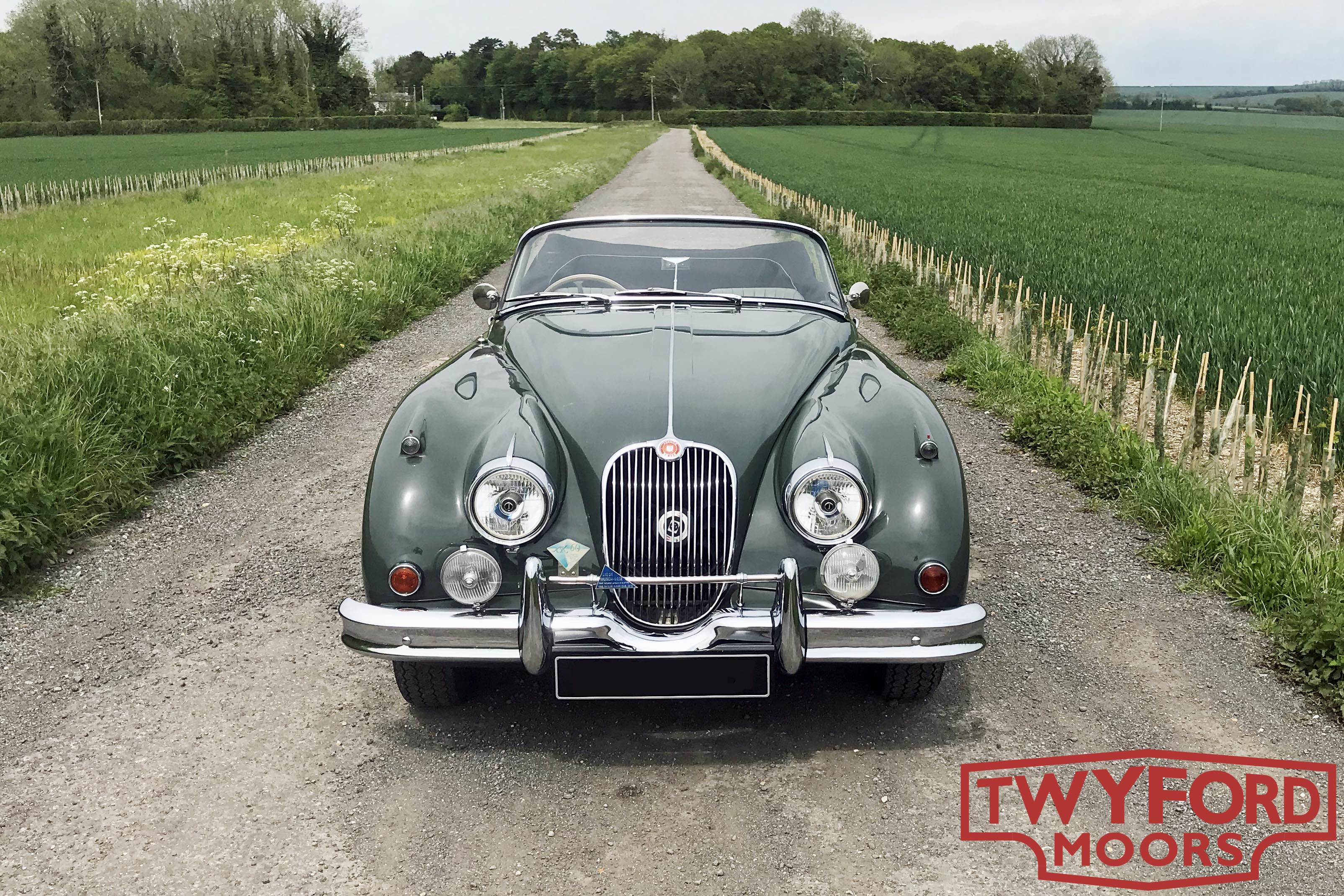 We have a lot of cars come in with wiper motor issues. One of the most common faults is a weak motor with low output or a motor which works for a little while but then stops due to the thermal cut out. This can be due to the thermal cut out acting up but is often due to excessive heat being produced by a poorly maintained motor. Often when we remove a wiper motor it looks like the one pictured in the background. Sticky and ancient grease which is probably as old as the car clogging up the mechanism, perished wiring and decades of dirt inside and out. Wiper motors are often overlooked both when it comes to servicing and restoration. In fact, the only time the really get any attention is when they stop.
We offer several solutions to this problem. We rebuild original wiper motors in house, replacing faulty parts, rewiring them throughout and making them look and work as good as new. If however you are frustrated by the wipers only clearing two thirds of the screen and would like a more powerful, modern, two speed motor we also offer a full wiper upgrade system. 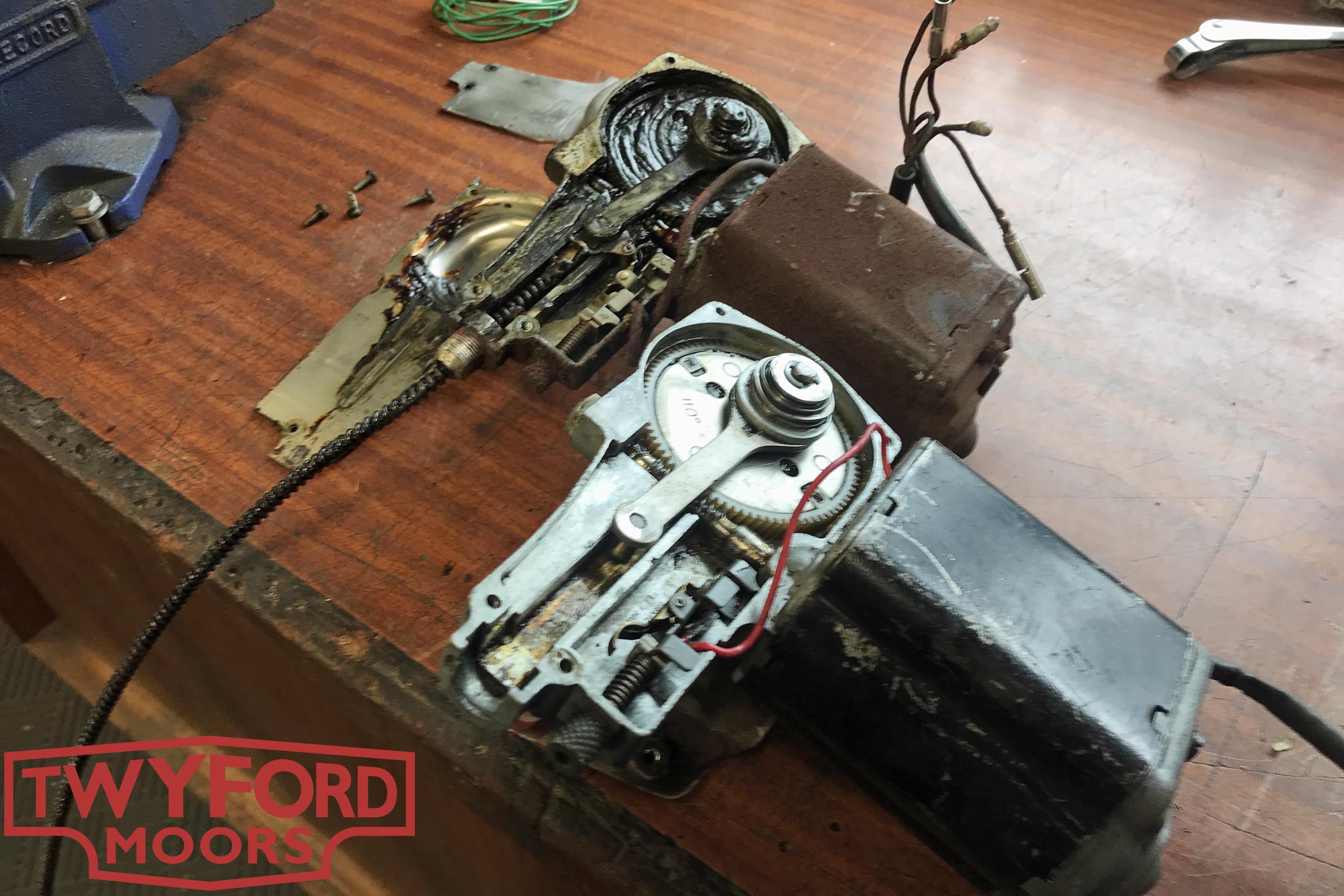