In case you missed it there appears to have been some supply and demand issues in the fuel industry. Fuel is always an issue in the workshop with tanks needed to be emptied and refuelled, with restrictions and rules around the storage of fuel and of course these are not the most fuel-efficient vehicles. Fortunately, we have managed to muddle through without any real effects on progress in the workshop. We did unfortunately have to cancel a couple of collections and deliveries and we would once again like to thank those customers for their patience. We now have diesel in our Land Rover and the trailer is back out on the road. It looks like things are starting to return to some semblance of normality and fingers crossed things continue to get better.
In this weeks' update we cover a couple of Jaguar E-Types, an XK150 restoration having its body fitted to the chassis and our disc brake upgrades.

This Jaguar E-Type 4.2 Series 2 OTS was bought into us with some serious engine problems. The engine in the car wasn't the original and the owner had another block and cylinder head which he wanted fitted to the car. We undertook a rebuild on the engine along with modifying the cylinder head to be compatible with the block.
Now the engine has been rebuilt we will set about removing the old engine and fitting the rebuilt one. From there the engine will be filled with running in oil, started up, thoroughly checked over and tuned up. Once the engine has been run in, we will retorque the cylinder head, change the oil and take the car for a rolling road tune. 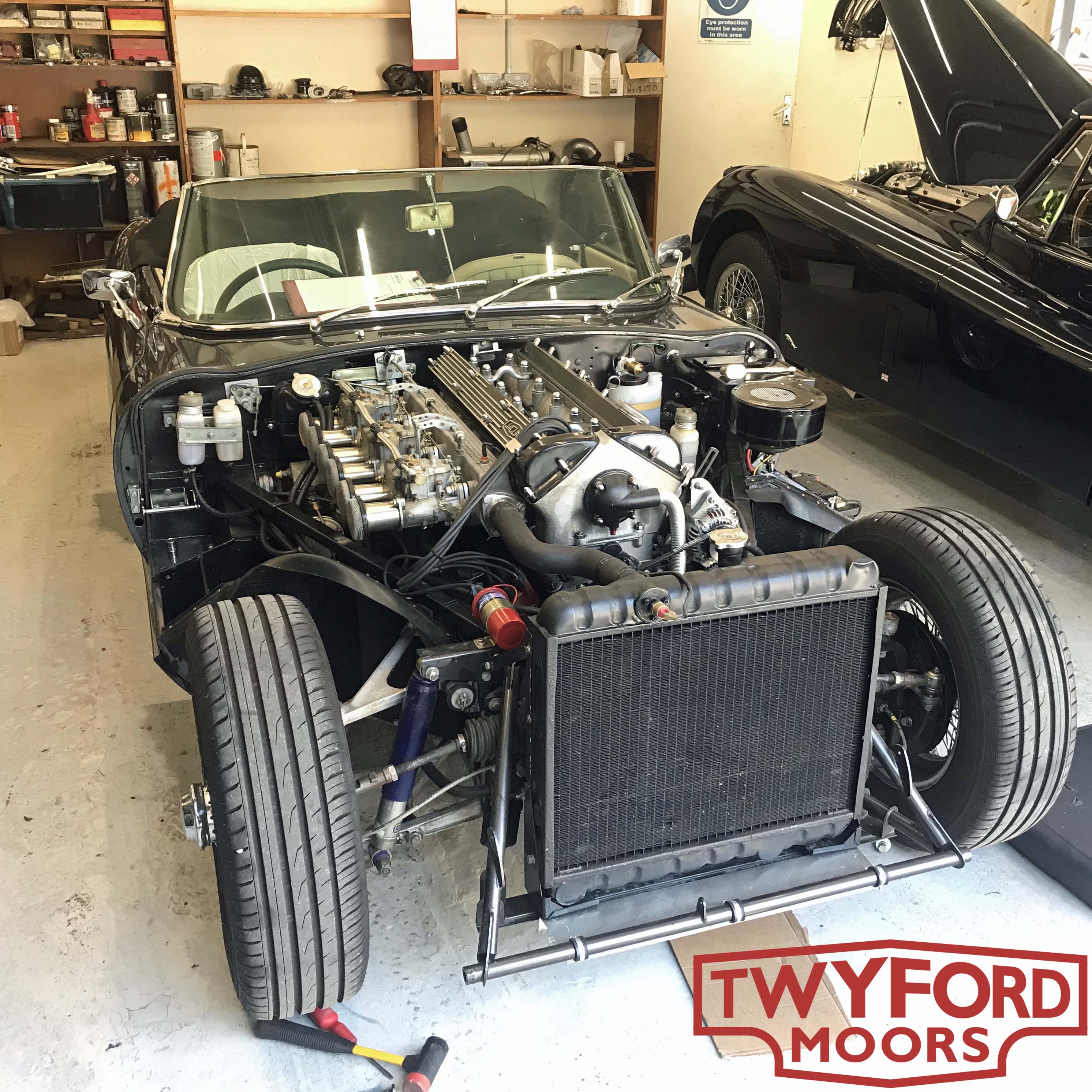 It is always a special moment in an XK restoration when we are finally able to reunite the bodyshell with chassis. In the case of this XK150 drophead we are assisting the owner with the restoration. We have undertaken the bodywork along with stripping and preparing the chassis for him. The owner has then built up the chassis themselves at home before returning it to us to have the body fitted.
We favour fitting the body to a fully built-up chassis with the engine and gearbox fitted simply because it minimises the risk of damage to the paintwork. It is a tricky job getting an XK bodyshell lined up correctly on the chassis and our team (and it is a team effort) have the skills and experience to get this just right. Of course, the task of getting the body to fit correctly started many months ago before the shell was painted. 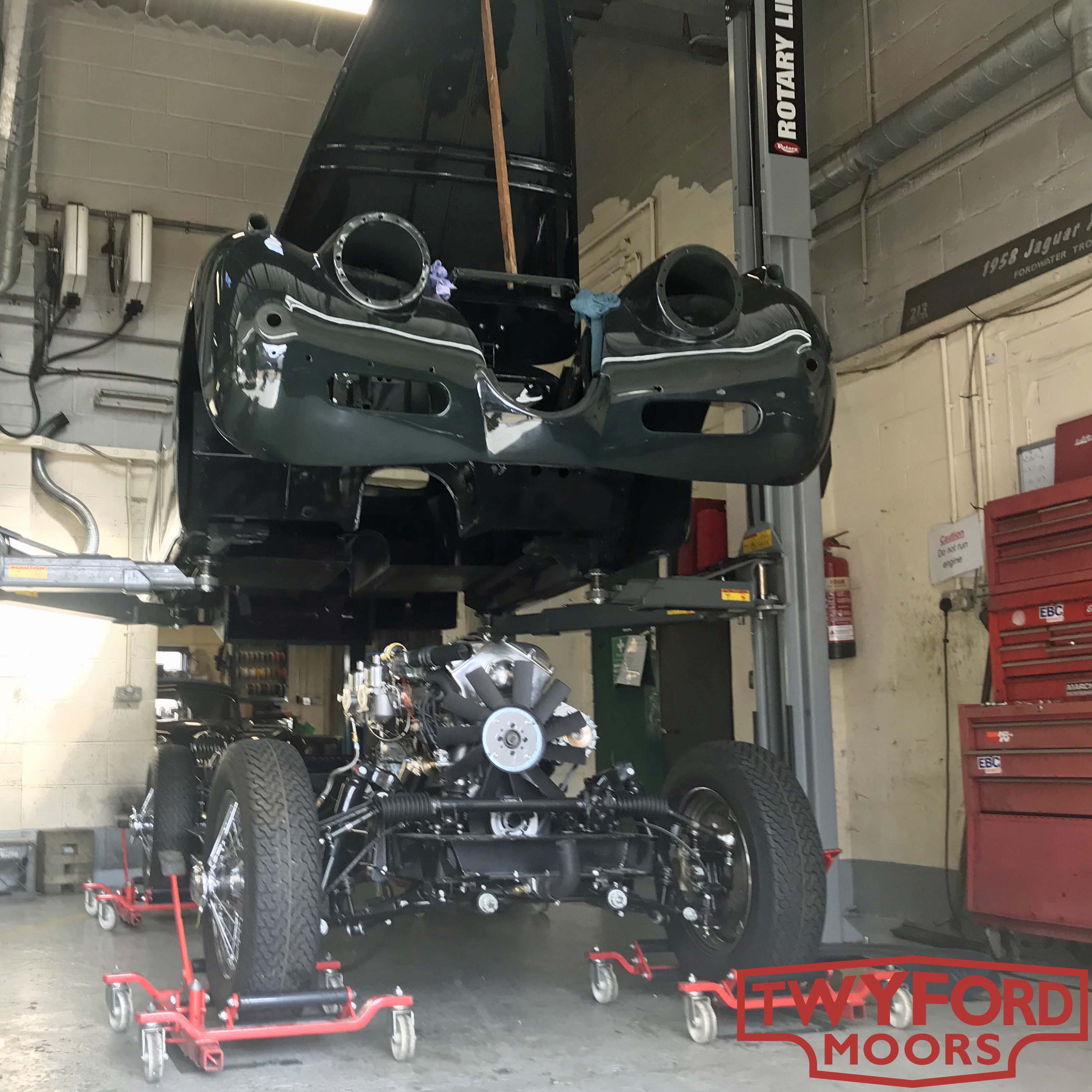 Just in for sale we have this rather smashing Jaguar E-Type. It is an original UK, right-hand drive car and is an early 3.8 litre model. When it was restored, it was extensively upgraded as a homage to the 'Semi-Lightweight' racing E-Types whilst keeping it a very usable road car. It features many upgrades including a fast road 4.2 litre engine, five-speed gearbox and uprated brakes.
The car has a very sporting presence with air ducting (the rear air duct has been cleverly repurposed as a high-level brake light), Dunlop wheels and a six-branch exhaust manifold running into a sports exhaust system. Inside the car benefits from a pair of the most comfortable seats we have ever seen fitted to an E-Type. The interior has been given a modern and sleek feel with a gloss black dashboard and sumptuous black leather without losing the period style which is core to an E-Types character. 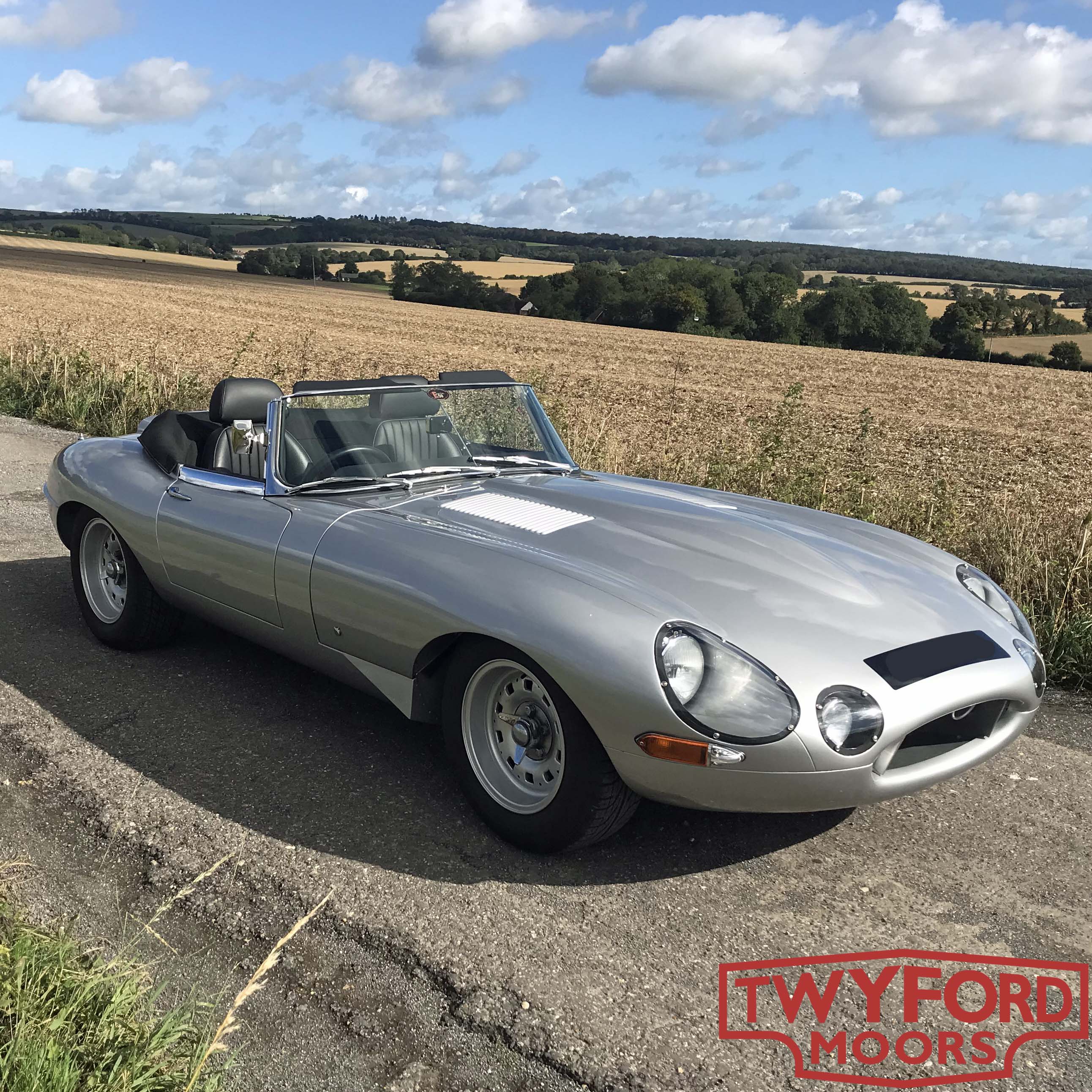 The XK engine is widely acknowledged as being a ground breaking piece of engineering. Certainly, it went a long way to shape Jaguar's fortunes and was literally the driving force behind their motorsport success through the 1950s. Like so many pioneering pieces of technology the XK engine did and does have its shortcomings, particularly the early engines fitted to XKs, MK1 saloons and the like. One of the most common problems we come across is oil leaks. Some of this is fundamentally down to the design of those early engines employing a 'scroll' instead of an oil seal on the rear main bearing. We often tell customers that the only XK engines which don't leak oil are XK engines with no oil left in them. We do now offer a proper oil seal for XK engines but this does require the block to be machined so is best done as part of an engine rebuild.
All this being said we often see cars with excessive oil leaks which are simply down to age and lack of maintenance. This can manifest in the form of leaking gaskets and seals anywhere from the cam covers down to the sump. Pictured here is an XK120 which is having the sump gasket and seals replaced. 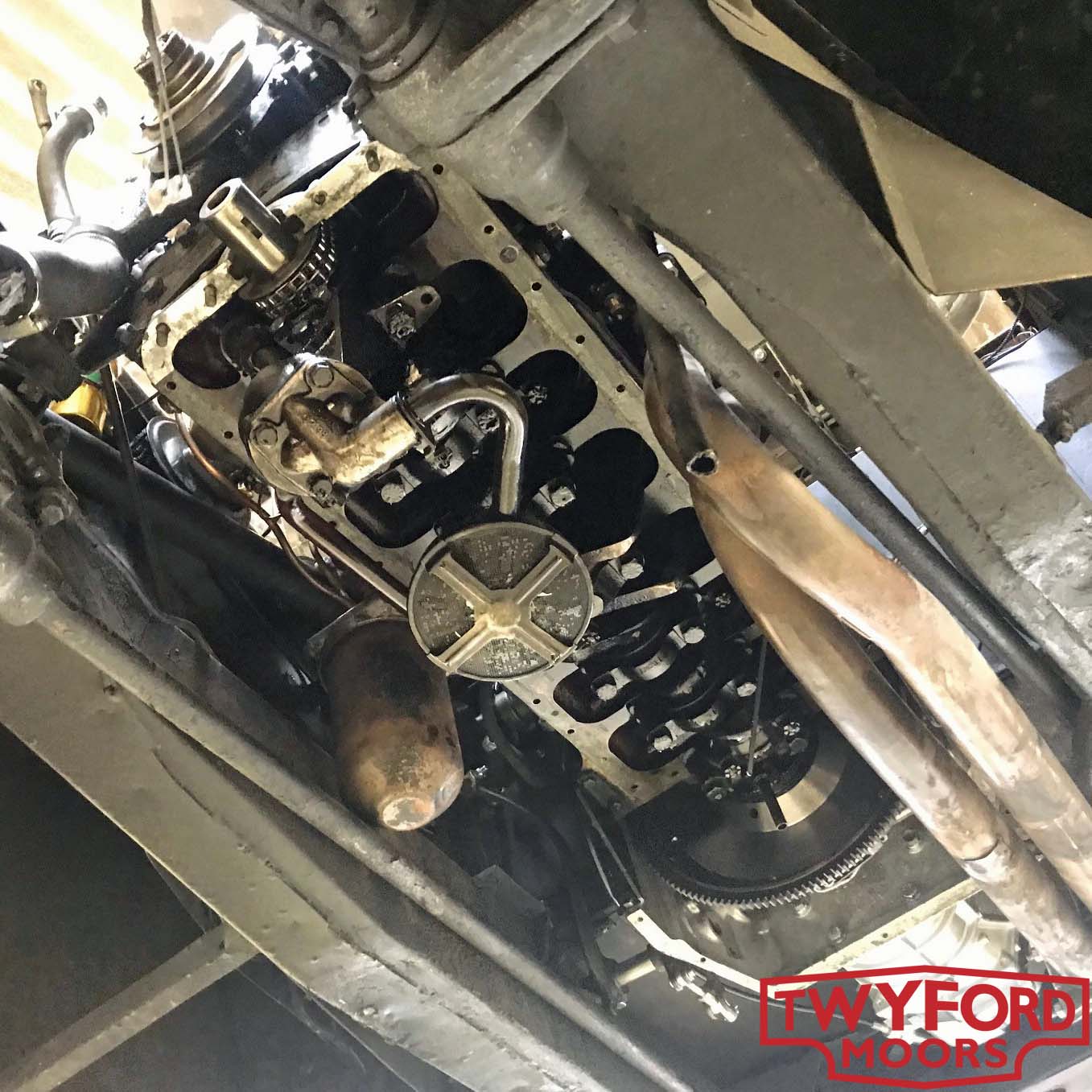 We undertake everything from full nut and bolt restorations to regular servicing and maintenance on Classic Jaguars. Over the years we have worked on more XKs than we can count and learned the foibles of these special cars in great detail. We believe this level of experience and specialisation is why our customers keep bringing their cars back and why so many new owners bring their cars to us to be checked over.
This XK150 S started life abroad and is still left-hand drive but now resides in the UK. The owner brought it into us with a wish list of improvement but also for us to check it over and make recommendations. We were pleased to find that the car was overall in good order with little work required. We passed on a few recommendations to the owner and are now setting about rebuilding the front suspension with polyurethane bushes and will then attend to some cosmetic issues. 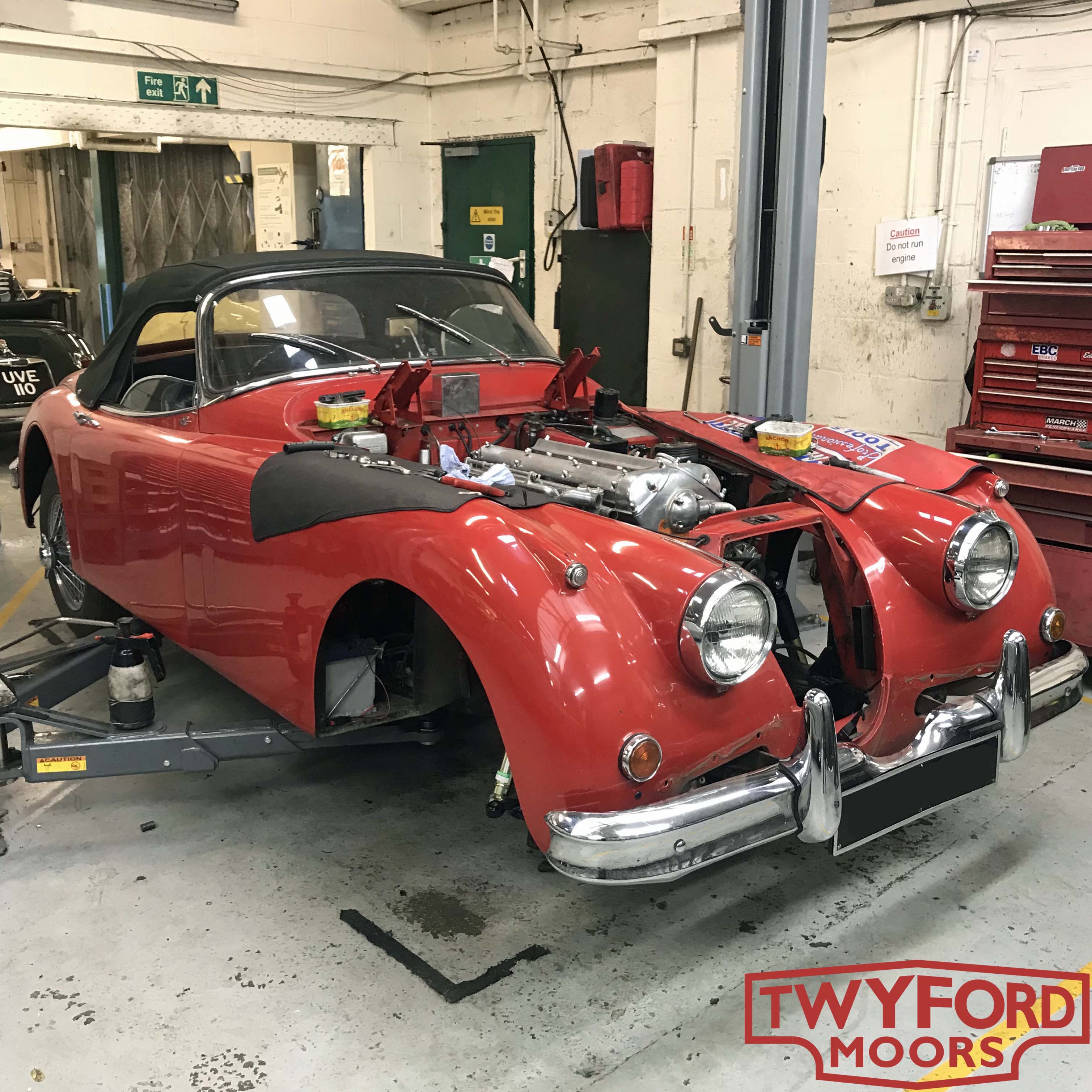 The XK150 is famous for featuring four-wheel disc brakes in a time when many cars were still running drums. The system was developed by Dunlop alongside Jaguar and tested on the C-Type racing cars. The earlier XKs (XK120 and XK140) however were fitted with drum brakes all around. These can work very well and many feel they are part of the character of their XK. They do have a few shortcomings though. First of all, they are fundamentally not as effective as disc brakes and give longer stopping distances. This probably wasn't such an issue in the 1950's but with modern driving conditions it is worth considering. Another issue is that they take time to warm up and then if they get too hot, they will suffer with brake fade quickly.
To bring XK120 and XK140 stopping power up to what really is required (especially when you consider the performance on an XK engine) we offer a front disc brake upgrade. This uses a modern, four pot, aluminium calliper and we recommend fitting a servo as well. These callipers can also be fitted as an upgrade to the XK150 to improve brake performance. 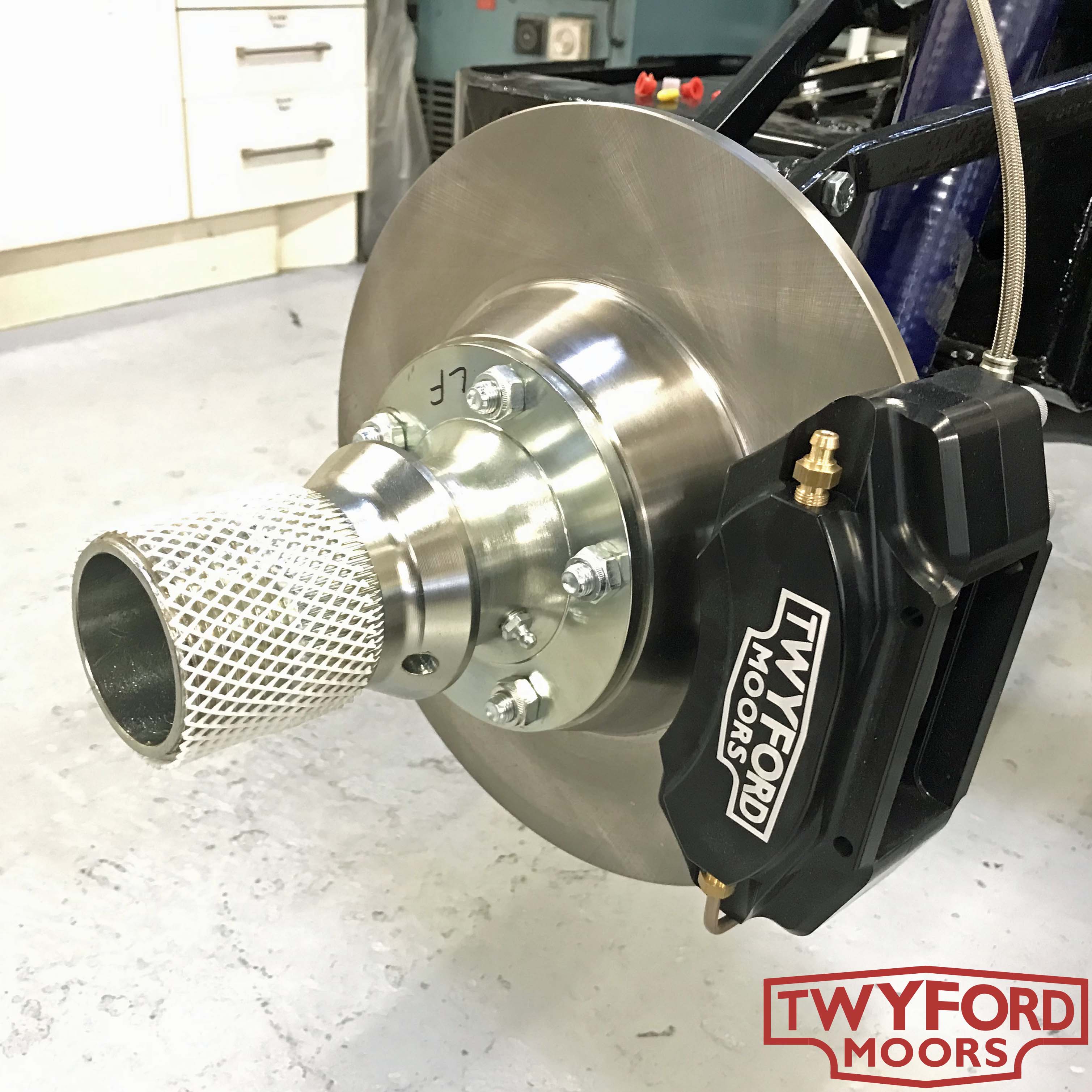